Great styling,looks great and modern. I love the headlights at night, they have a blue colored light strip on top giving it a distinct look at night. The grille and hood lines flow beautifully to the rear of the car. Great car if you want to stand out.

The turbo lag isn't as noticeable as it is on other cars I have driven. Faster than most V6 engines. Fuel economy isn't bad for the power either.

The handling isn't as great as my old BMW, with much more body roll. For a FWD car, the ReAxs feature helps from having too much understeer, resulting in great handling on a FWD car. The steering is on the light side, but has decent feedback from the

Not as quiet as a BMW, it has several creaks and squeaks that annoy me, but sounds like any other Saab I've been in.

Based on the fact that it's pretty much almost all GM material, the engine, platform, electronics should prove to be as reliable as the typical GM vehicle.

The standard suspension is really lacking in reducing body roll. Steering is quick enough, and feedback is sufficient, but on the light side. Torque steer is minimal.

The seats are very comfortable, but those with longer legs (especially thighs) might have trouble getting in a comfortable position. Tall drivers may find some awkwardness with all around reach. I.E. The steering wheel doesn't telescope far enough f

The base sound system is decent, with nice highs and mid range sound. The base is muddy and doesn't "kick." Even at medium settings, you might feel as though the bass speakers are about to blow (not uncommon on these cars)

2 months after purchasing the car, the value has dropped about 4k from the original price I bought it at. 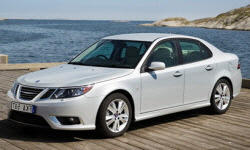 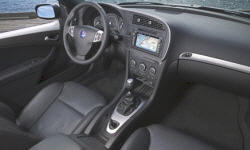