2003 Subaru Forester Pros and Cons at TrueDelta: Practical and fun to drive, reliable too by lwslade401

I've owned this car since 2011 - and four years later I still don't want to drive anything else.

I purchased this car in March of 2011. When I purchased it, it had around 65,000 miles on it. As of now (31 March 2015), it now has 127,000 miles. Most of that was accumulated during my years of driving back and forth from home to college 5 states away after every semester. I've spent a lot of time on highways with the Fozzer, and although I do have complaints, they are few and far between. I'll get them out of the way first:

In conclusion: it should be apparent by now that I'm in love with this car. I'd actually be heartbroken if something catastrophic were to happen to it, and my first thoughts would be towards finding another Forester of the same generation. Can't recommend it enough. 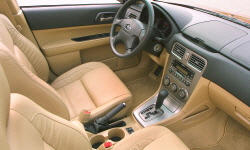