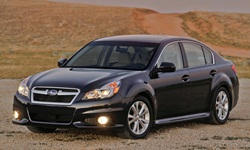 I actually have a question(s) that the drop box didn't have, but I'd like to know about this as well. The question that I most want an answer to is "What is the biggest gripe you have about your Subaru? Is that gripe significant enough to try to convince potential Subaru owners into looking at a different brand?"

The other question is regarding insurance costs. Are they more expensive to insure assuming the car in question is not the BRZ or a WRX STI model?

Thak you for your responses.

Subaru windshields have an habit of batting rocks and road debris but seldom win. Had a 2009 Legacy that had a crack across the windshield costing over $300.00 out of pocket. Since they market themselves as dog-friendly but not on a lease return, the soft-touch dog panel eventually tore from her dog's nails and Subaru charged for a new door panel when she turned it in. She continues with a 2012 Forester 2.5l which eventually ran too low on oil due to oil consumption and eventually cleared my synthetic reserve before we traded on a GMC Terrain for a 45,000 mile lease which she says is her favorite car ever. The Forester cracked a windshield and had very weak electrical system. It would pop the 12 volt outlet when I would try to add air to the tires with a small compressor that had no problems in other cars.

So after we traded rhe Forester we got the class action lawsuit letter for oil consumption. If I would have kept my oil purchase receipts I would have been paid for it. This past week she got a Takata bankruptcy flyer in the mail, most likely from the Subarus.

Her Forester tires were just off of the wear bars at 19,000 miles and had to be replaced. We had 45,000 miles on the Terrain when we returned it and with in lease return measurements.

We took a rock to the windshield of the Terrain in Texas earlier this year and ended up with a chip. But while driving through Colorado on that trip we saw allot of Subaru's with full windshield cracks. The combination of thin windshield glass, poor quality tires, and thin electrical system, I think Subaru is really taken a measure in trying to achieve EPA fuel economy standards at the cost to the consumer.

I compared Subaru to Honda and they have the same insurance costs with the exception of the WRX and BRZ.

Subarus do have problems with the windshield cracking. It could be covered under your insurance as it was for me with my 2016 Prius, which also has a $900 flimsy windshield. I am not fond of or familiar with Subarus becuase they prioritize ruggedness and off-road capability over an engine that doesn't burn oil like crazy and there are barely any Subarus where I live. They don't have the longevity of Toyotas and Hondas.