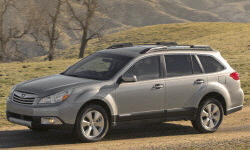 I currently own a 2001 BMW 740i and am looking to make a switch to a Subaru. What has been your longterm repair and maintenence been like since you bought it? I know that these should be far less expensive than a BMW, but I do see some expensive costs. I have done a lot of work on my own car, including engine repair, suspension and breaks. How easy is it to work on these?

I\'m new here, so I\'m not sure if I am asking this in the right area.

You might want to brush on Subaru oil consumption class action suit. Not unless you like tearing engines down and replacing piston rings.

This era also had head gasket problems too.

I own a 2013 Subaru Legacy which is the sedan twin of the car you are considerin since it was redesigned in 2010 at the same time the Outback was (and redesigned again in 2015). The only issue I have had after 91,000 starting at 44,000 was limited oil consumption. So now I add one quart of oil before I change the oil every 5000 miles and it runs fine. Note I have had ZERO issues besides that on my loaded 3.6R Legacy. It is great in the snow.

Now if a constant oil consumption would drive you crazy, steer clear. Otherwise I would say buying a 2010-2012 Outback should be generally speaking a good car to own since the gasket issue is non-existant on those model years.

Finally, they are not terribly hard to work on but note, they do have a boxer engine so the cylinders are on the side, not in the V pattern orline inline pattern. Also note particularly on the H6 and less on the H4, the rear spark plug on the driver's side is hard to replace - because you have to replace it by feel and a rachet wrench that has a 90 degree angle joint to reach in and get the spark plug out - every 100,000 miles.