2015 Toyota Avalon Pros and Cons at TrueDelta: Premium price without the premium quality by No2rdame

If you're considering a Toyota Avalon I'd consider the competition first. This car is billed as Toyota's flagship sedan but there are much better cars for the price. While it looks nice and at first seems to be flagship-worthy, the more I am behind the wheel of this car the more I regret buying it and long for the day that I can catch up to the quick depreciation hit I took by purchasing it so I can trade out of it.

The interior styling of this car has really improved over the years. I have the tan interior and the two-tone look with the leather dash and two-tone leather inserts really make it stand out visually.

The V-6 engine is both smooth and responsive. Mind you, I am used to driving heavier vehicles so I don't have much to compare, but when I press the accelerator it will definitely move.

You would think that Toyota's "top of the line" sedan and "top of the line" trim would reflect the qualtiy the company is known for. You would be wrong. I can barely turn the radio up without an annoying buzzing/rattling sound every time a bass note is hit. I don't listen to rap or anything bass heavy, nor do I even have the bass turned up, yet that doesn't prevent the car from sounding like some piece of junk built in the late 80s with a cheap Walmart radio dropped in. The buzzing comes from the door panel and can be alleviated if you uncomfortably contort yourself to lean against the door. I've taken it to two dealerships and they say it's part of the car's design. REALLY? The analog and digital speedometers also do not match up and are slightly off. It's not a big deal, but you would think that this is something Toyota's QC would catch but apparently that, too, is within tolerance just like the buzzing sounds. These issues are not uncommon with Avalons, something I didn't find out about until after I bought the car and then started researching the issues I experienced.

I thought it was a pretty decent and quiet ride UNTIL I rode in a Nissan and heard the difference. The road noise is much more pronounced than it probably should be.

I never noticed this until recently when I had to take evasive action on the road, but the handling of this car can be described as mushy at best.

More About the Avalon 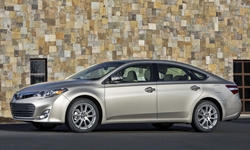 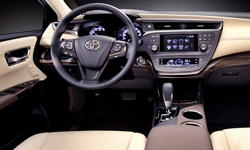