2013 Toyota Prius c Pros and Cons at TrueDelta: Economy car to save gas (and money) by erwinsantoso

I was thinking of buying Prius to save some money (gas), however, I couldn't stand the numbmess of the steering and handling, having used to driving Civic and Accord. So when I test drove a Prius C, I felt that it was much better than the regular Prius. Even though I had to sacrifice space, I think it's worthwhile, since I can feel the car better than the regular Prius.

As expected, the powertrain of this car is not powerful. However, it is enough to maintain highway speed albeit with gas engine groaning. 'Eco mode' retards the engine output, and I can notice that it is harder to accelerate as well as maintaining speed in inclination of 1 degree or more. Turning off the 'Eco mode' makes the car livelier.

Most of the time, I turn on the 'Eco mode'. Also, I switch the display to 'Eco Score' display. Following the guideline such that the power band is always within the 80% quantile of 'Eco' range, I can maintain roughly 49-51 mpg on the highway (speed between 55 to 70 mph, depending on the inclination). Overall, I can get 54-60 mpg due to the terrain in my commute that allow me using battery power completelyfor the last 1 mile of each trip.

I have driven 2003 Honda Civic as well as 2012 Honda Accord. This Prius C is more nimble on twisty road; I suspect this is due to the battery location that make the center of gravity of this car much closer to the ground, and in between the wheelbase. Side wind doesn't seem to bother this small car either, and I believe it is better than Civic and Accord. Steering is a little bit more numb than Civic or Accord, however, it is more responsive than the third generation Prius (2010-2015).

Ride is firm; firmer than the third generation Prius, as well as 2012 Accord. i believe it's similar to 2003 Civic.

Road noise is worse than third generation Prius. It's slightly worse than 2012 Accord. It's similar to 2003 Civic.

Driving position is good, however, rear visibility is less due to slope roof in the back.

This is a little bit worrisome to me. The dashboard pad was broken after 35 months (19K miles); it was replaced under warranty. I didn't expect that to happen on this Toyota-made car.

I believe this is a car mainly to save gas. The known plushness of Toyota cars is not with this Prius C. However,youget morestability compared to other economy car, due to the placement of the battery (which is heavy) near the ground, and within the wheelbase. The small overhang in the front and back seem to help a lot also to make the car nimble on twisty road. 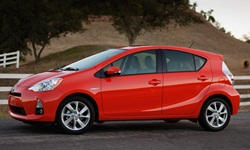 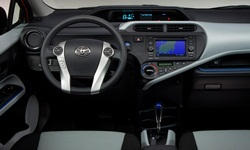