2007 Toyota Yaris Pros and Cons at TrueDelta: Utility per Dollar by chrismartin

Your satisfaction with this car depends on your attitude and expectations. If you're willing to accept and mitigate a few quirks - and you realize that it's engineered for a price point - then you'll appreciate the very low cost of ownership and legendary Toyota reliability.

If "the driving experience(, man)" is of paramount importantance - or you want power/convenience features that nobody truly needs - then look elsewhere, and spend more.

If you view car ownership as an effort to optimize transportation utility per dollar spent, it doesn't get much better than this. Yarises are cheap to buy used, cheap to drive, and cheap to maintain.

I track my gas mileage and have averaged 35 MPG over the past 9,000 miles, mixed city and highway driving. Just got 35 MPG overall on a 1200 mile interstate highway trip, 70-75 MPH average speed, with a mountain bike on the back. I get low 40s MPG on country roads, 50-60 MPH and driving gently.

Anecdotally, this Yaris is at least as reliable as several other Toyotas that have passed through the family, which is a high standard to begin with. Toyota has made several engineering choices that reduce and simplify maintenance effort:

As with any car, getting the base model helps reliability. Crank windows reduce electrical complexity and an actuator in each door, as do manual locks. Two doors rather than four means half as many doors to have issues with!

There's lots of space around you in the front seats, moreso than other cars I have owned. Lots of modern cars have a big, tall center console that extends back to the rear seats and up to your elbow. The Yaris is not like this at all. Only the gear stick separates the driver and passenger.

People say it doesn't hold as much as a Fit. That may be true, but as someone who uses the rear for cargo more often than for passengers (seats typically folded down), I am pleased. With the seats down I've fit bicycles, a lawn mower, and a futon frame.

It's not a quiet car. The engine is distinctly audible in the cabin, though I wouldn't call it 'loud'. I suspected an exhaust leak shortly after purchase. Nope! Just how it's supposed to sound. Toyota has likely skimped on noise inulating material. Not a problem, just something to get used to.

The seating position is a little weird. I'd describe it as "tall", though I am not a tall person. The top of the windshield is not very high in your visual field, so you don't have an expansive view of the sky. Some stoplights require craning your head forward to see them. The pedals are below you moreso than in front of you, like you'd expect in a van or truck. I'm guessing Toyota wants the Yaris to feel like a bigger car than it is. Not a problem, just something to get used to.

Some people complain about the center-mounted instrument panel and lack of tachometer. I don't really care about those things, but the speedometer is awful from a readability perspective. The major tick marks are every 10 MPH, which is fine, but the minor tick marks are every 2 MPH rather than every 5 MPH, which makes them so tiny that they blur together. This means you can't glance and quickly determine, for example, whether you're doing 43 (slightly speeding) or 47 (really speeding). Also, the speedometer is backlit-only, even in the daytime, a style that annoyingly popular these days. Turning the headlights on dims the instrument panel backlight, so if you need your headlights in the daytime, you also need to adjust the instrument panel to the maximum brightness setting. I have a ScanGauge installed on top of the steering column, with calibrated speed and engine RPM as two of the readouts. This mitigates the crappy speedometer and missing tachometer.

It's a light car with relatively stiff suspension, so you feel the bumps. Not a problem, just something to get used to.

More About the Yaris 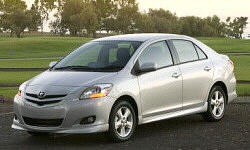 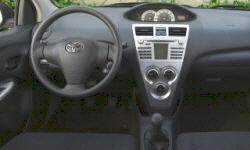