2017 Mini Clubman Pros and Cons at TrueDelta: MINI Cooper S Clubman All4 - the perfect vehicle for the MINIature family by quentin.berg

11 years ago, my wife, fresh out of nursing school, ordered her first car. Pepper, the pampered, sweet 2005 MINI Cooper S was the perfect car for snaking through traffic and parking in a crowded college town. As we transitioned through our twenties, into marriage, and parenthood, Pepper has faithfully been there with us. Disheartened by leaving Pepper in the garage any time the family went on a weekend trip and the lack of modern technology such as bluetooth, the Clubman was potentially the right car for our small family of 3. After a test drive, my wife was smitten. We ordered a relatively lightly optioned S All4 in March 2016 with May delivery. Wanting to have the same overall positive experience we did with Pepper, we kept the fluff to a minimum (no auto aiming headlights, auto folding mirrors, or adjustable suspension). We also went with the 6MT again. The new Clubman is white with black roof and stripes just like the old one.

The UKL platform seems to fit the Clubman size better than the Cooper 3 and 5 doors as far as overhangs and general proportions. In Pepper White with the contrasting roof, bonnet stripes, and 18" wheels, the Clubman S has classic good looks while maintaining an athletic side. The hood scoop and little red esses denoting the 2.0 turbo underhood is a nice touch to round out the sporting looks.

The extra width and wheelbase makes it a legit family car for a small 3 person family like my own. My daughter has tons of leg room behind 5'8" driver and passenger. I can sit in the back behind my wife with a good 6" between my knees and the seat back. Factory roof rails are available, so moving bikes or cargo to the roof is way easier than the other hot hatches. My MKV GTI, for example, required a $400 roof rack system from Thule that marred the paint. Having an actual spare tire in the trunk is a blessing for those of us that enjoy traveling to more remote places on the weekends.

The styling of the interior is probably the most true to the MINI name but with much nicer materials than I'm used to seeing in a MINI. The Countryman we drove just after the Clubman was two steps down in interior quality. We resisted the temptation to get the XL radio unit but upgraded to the optional H&K speakers. While not terribly impressed with the interface of the radio at first, I've acclimated to it well and it does sound great. There are a bunch of fun little touches like the winking Mini in the IP when you turn the car off, the thought bubbles with a rocket ship and a gokart from the mini graphic when you turn sport mode on, or the LED around the radio that matches the rev counter. The LED around the radio can also be set to 10+ different colors or cycle through. It definitely feels more special than a GTI, WRX, or Focus ST and I think those little touches really appeal to non-car guys/gals.

The chassis is where the Clubman really shines as a "grown up" MINI. It is very stiff and feels robust in a way my MKV VW GTI never did. I was similarly impressed with the MKVII VW GTI chassis, though. Suspension feels more German luxury than sport compact. It eats up the rumble slow down strips with no crashing or booming that I've come to expect on sport compacts like the WRX. This was wholy unexpected when the spec sheet read 18" wheels on run flat tires particularly since the 2005 MINI Cooper S that the Clubman replaced was particularly harsh with 16" wheels and runflats. The Clubman isn't as lively as said 2005 MINI S, but it feels much more premium.The 18" rollers on 225 wide rubber grip for days, though. It feels quite planted and confident in a sweeping WV corner.

The sport seats in the basic black leatherette are nicely bolstered though not overly enveloping like seats in my FR-S. This means it hits a nice middle ground of comfort but still keeping you from being thrown around in aggressive driving. The manually adjusted seats are easily positioned to a comfortable state after you figure out which of the 4 levers is doing what. The adjustible thigh support is especially nice and not something I often see in this segment.

The engine is where I'm probably the most pleased and simultaneously disappointed. First, only having 190hp makes zero sense when this same engine will make 228hp in the X1. The low end feels extremely strong, but as the revs pass 4500, power tapers off significantly much like the MKV GTI does. It feels 100% artificially limited considering all the technology under the valve covers of the B46 engine, though. My wife rarely spins the engine to that upper rev range, so it is completely fine for her driving style. That said, the "fake" limitation really hurts the Clubman's value proposition against the other hot hatches on the market.The 6MT and clutch are easy to modulate and smooth, but both lack the engagement and feedback of my FR-S. The rev matching feature on downshifts work well.

I both love and hate the barn doors. They are charming on one hand with a nice, wide opening but opening 2 doors to get full access to the cargo area is occasionally irritating. You also have to watch the opening area because it swings wider than the vehicle.

It is a huge plus that you can spec the Clubman nearly any way you'd like. There are tons of colors and wheel choices. AWD or FWD, 3 cyl or 4 cyl, MT or AT. They offer tons of different interior colors or configurations and even ambient lighting. You can even choose how your seats split in the back. The problem is how damn expensive everything is. You pay dearly for those options. We like simple black and vinyl has come a long way, so we went with the basic interior but it is annoying that the non-reflector headlights were a $1000 option, for example. Choices like that dial back the premium feel.

Overall, while it wouldn't be my personal choice in this segment, it is a charming little car. It is the natural progression to a 34 year old mom from the 24 year old recent college grad that purchased her 2005 MINI Cooper S a decade prior. MINI dialed up the comfort, convenience, and premium feel while dialing back the razor sharp handling (and accompanying rough ride). My wife didn't cry when her beloved Pepper went off to her new owner, so mission accomplished, MINI. You made the right sized MINI for this stage in our lives.

More About the Clubman 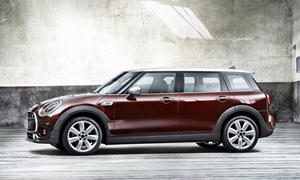 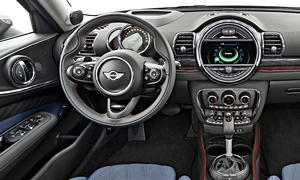