Are You Happy w/ Your Tiguan? 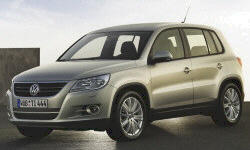 Are you happy with your Tiguan\'s handling and all around functionality?

Yes I am happy with my 2009 VW Tiguan. It is quirky in terms of repairs. I am on my 3rd or 4th water pump...but I think the first 3 were the old design. So this issue has a fix. The direct injection 2L turbo will carbon up over time. And when it does you have to have the intake valves cleaned. About $800 repair. Also has a defect design for the sunroof drain tubes. Note all the issues and I say it with conviction... I love this car. It drives like no other. Seats are great. Pano roof is awesome. Transmission is great. Takes curves well. Excellent brakes. Size is perfect for me...but I think everyone had their own concept of what works for them. The overall build quality was excellent. If you compare to a CRV for example.... The Honda has a mushy ride...too soft seats...no zip under the hood and a CVT tranny which in 2013 hen I test drove one has noisy and no fun to drive. Subi was the same....mushy. Closest match was the Escape... But the Tiguan still my favorite.

My wife has a VW Tiguan, its a 2016 model and she has had it since March of this year. There are very good things, and very bad things about the car. I'll start with the good. 1. The engine has a lot of power, especially when pushed (not very often but it's there if you need it).
2. Sporty ride, we have the R model and it handles very well. We compromised a bit with ride quality, it has the 19 inch wheels so some larger bumps are felt in your bones, but we prefer that over the soft and compliant ride on the SEL.
3. Cabin noise is exceptionally low, they clearly put a lot of effort into making the ride as quiet as possible.
4. For a compact SUV, it has plenty of interior space.

1. We have had significant electrical problems. The first of which was the alarm would go off while driving at random and it's very embarassing to say the least. The second issue is many times we start the car in the morning and warning lights would be on. We would take it to the dealer and then be told that nothing wrong was found. Also, the head unit would not run android auto on my samsung galaxy. It simply says that there is an error, the dealer states that there are no software updates for the head unit, but the phone runs android auto perfectly fine in my Honda civic.
2. Engine noise, while the engine is powerful, it is noisy at low rpms. In normal conditions it sounds like a rattling dog cage under even the lightest of acceleration.
3. Leather seats, while very nice that the tiguan comes standard with leather seats, they are a "leatherette". They don't feel much like leather at all in my opinion.
4. Gas mileage, we get nowhere near the epa estimated mileage for the tiguan. On highways we average roughly 20mpg, and 18 or so in the city.

Overall it offers exactly what we need it to, space, pep, and a sporty ride. We definitely would not purchase it again though, and the price is much higher than competitors. We plan on keeping it until the end of the warranty before getting rid of it.