A solid, stylish ambassador for Volvo, the V50 is a rewarding car to use, with serious attention paid to its functional ability to do what it claims to do: carry cargo in safety and style.

Heowever, find out what the dealer will charge to do out-of-warranty repairs to the electronic controls, which are involved in all aspects of its operation.

The overall body design was an important part of our criterion for this car. We needed a car with a roof long enough to separate the roof cargo bars by about six feet. We were also looking for a car a bit smaller than the '94 Camry wagon we had had before. I also had wanted a white car for heat reasons. As laginappe, Magnus came with a sunroof, which is fun.

While we wanted a smaller car, we still wanted a car that could adjust and open up as much as possible when something large came along.

* The roof rail fittings are cast aluminum, and the rails themselves are stronger than the Volvo 245 had.
* The cargo area is fitted out with five (!) hold down points, all solidly anchored to the structure.
* The rear seats fold down easily, and they flip back into place securely without having to "fish" the belts back into position.
* The rear seats are split 60 / 40, so odd loads can be handled.
* Rear seat headrests are removable (something we have taken advantage of permanently, unless we are bringing passengers along; this improves rear visibility dramatically)

Volvo has a corporate commitment to safety. This is not mere posturing: In the last six months of "fitting out" an 8 year old car, I have run across a number of instances of structural planning for strength in the passenger area and "crushability" in the peripheral areas. The results are visible in the Volvo-Saved-My-Life thread at Swedespeed.com. Cars that have rolled regularly emerge with their windshields intact!

I haven't installed the hitch carrier yet, but the solidity of the frame and running gear will support a towed load easily, as opposed to many small cars that actually forbid it!

Both our previous wagons, Toyota Camry and Volvo 245, were noisy echoing boxes, with considerable rear wheel road noise finding its way into the passenger area.

A boxer with a glass jaw. Mechanically, the V50 is a solid, secure vehicle. HOWEVER, it is knit together by an immensly complex (to my 20th century mind) mix of three network busses and ~ fifteen interconnected processors. If this system fails to deliver, only the dealer can diagnose or repair the software side of the vehicle. Even a low battery can result in a bewildering array of symptoms, as various modules get their stories mixed up, with doors locking and unlocking, the CD changer cycling, etc... all due to (in my case) corrosion under the battery terminal! On a smaller note, the tail gate has an electrical ONLY latch. In my six months of ownership, there have been two times when I needed to open that tail gate while the battery was out of the car.

Keeping those five cyclinders fed burns fuel. On the highway, that's not a problem, but in stop and go traffic, MPG numbers go down and down.

Our local dealer has a good reputations; however, as a "luxury" brand, "Ya gotta pay to play." Shop rates are $120 minimum for any work; at those rates, it is quicker for them to diagnose wholesale replacement than to spend time repairing sub-assemblies. When I bought the car, I had an air bag fault complaint. The dealer diagnosed it (for $120) as a bad instrument panel that would need replacement for $1700. The actual fault? a blown airbag warning LED. The good side of this for buyers that can do DIY repairs is that resale prices are depressed.

In common with many sunroof-equipped cars, any failure of any of the four (!!) sunroof drains can (and has) resulted in GALLONS of water trapped under the carpets. Since the is a heavily electronic car, and since the data for those electronic systems runs under those carpets, this is far more that a little mildew problem. Dealer fixes require hours of shop time to remove seats and carpets as well as attention to the drains themselves. Anything less is not an actual fix. Since I've gone 95% DIY, this has made no difference to my costs, but for someone expecting to use dealer maintenance, this would be a major consideration.

Reason to buy: For the quality, used purchase prices are low. This is because the expected dealer maintenance costs will be high. For a DIY owner, the result is a wonderful and rewarding vehicle.

More About the V50 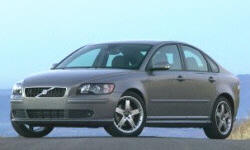 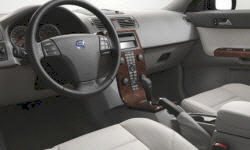