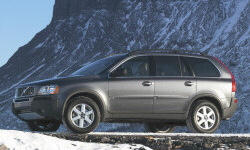 What model years and which engine have been the most transmission failures?

Half of us followed the owners manual for transmission maintenance half of us change fluids more frequently with better transmission fluid such as valvoline or mobile 1 or amsoil synthetics and although we fared just a bit better to make the transmission less trouble prone, we still had minor and major problems where we felt it to be unreliable.

Felt the computer electronic issues was one of the culprits and the cheaper parts used that are made in third world countries was our best guess....we wished the parts in the tranny had some stamps of country of origin but no such luck when we pulled a couple of them apart on the xc90 at 110k miles 50/50 city/hwy miles.
Do we still love the Volvo strength during crashes....oh yes we believe in their safety til this day 3/08/2018.....we know they cannot use pure heavy steel as before when they were made like baby tanks but we still trust them.....youtube them and they continue to put smiles on your faces when you see people walking out of their volvos after terrible crashes.