Better than EPA mileage, 18 around town, 25 highway (65-70 mph). 20 average. I have records of every fill up.
problems: twice had pollution control items repaired. Once failed state pollution inspection due to odd OBDII report, no check engine light error though. Dealer reprogrammed the computer to fix.
More recently, both rear springs broken. city driving only.
110K miles in 11 years.

A bit rough rough riding, compared to other similar sized SUVs. standard 17 inch wheels.
Acceptable power, could use more than the 225 hp that the old 6 cylinder provides.
Great road feel on the steering, but not at all heavy as compared to a fingertip light power steering on American vehicles.
Harder starting than most cars in my experience...have to crank it a bit, even when it was new and even recently after the 100k mile tuneup. If it doesn't start in 5 seconds, and you stop and try to start it again, there is a tendency to flood the engine.

However, it's been the most reliable car and great service from any car I've owned in the last 40 years.

Recalls have been minimal, once for a sticker to place on the OBDII access panel.
Once for a computer reprogramming.
Body is excellent even after 11.5 years. No rust - surprising for northeast US car. I see a lot of newer vehicles with rusted out lower door panels. My oldest brothers 1969 Opel was like this car, no rust even when it was 10 years old! Great steel quality and paint from Germany, I guess.

repairs:
1) twice, pollution control devices failed, leaving the car very hard starting
2) power window regulator broke, and the repair was less than I paid 12 years ago on a VW Golf GTI. Quick BMW repair, parts were in stock, and I waited for the car instead of getting a loaner vehicle.
3) both rear springs broken. Again a quick replacement (?) and the cost was less than 600 dollars. Dealer had parts in stock. Found a few instances of BMW spring replacements on 3-series cars as well. It's an easy fix, probably less than 20-30 minutes for an experienced BMW mechanic. But this one still surprised me that springs would break on a city car, never off road and that 3-series also experienced broken springs.

Styling:
it just looks "right" to me but I've always liked hatchbacks, owned 3 Golfs (77 Rabbit, 84 GTI, 95 GTI). Don't like the newer X series which are overly sculpted. Straight and simple, no chrome on the kidney grill verticals.

Interior: car mags panned the car when it came out because of it's cheap AMerican style, "plastic" interior.
I've no problem with it. Simple is better. I would have preferred cloth seats over leather, and had no interest in the leatherette, which is more like plastic.

Preferred options: Panorama sunroof and heated seats. No GPS for me. I don't like driving distractions.

I think I'll keep this car another 10 years.

Looked at the 2015 X1 and X3. Just don't like the new cars with the LCD in dash, joystick selection - very distracting and not good from a safety standpoint. I had a 335D for a week and hated the in dash LCD and radio controls. Was very happy to get back in my own X3.

More About the X3 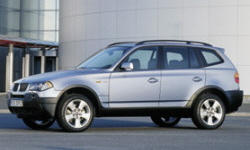 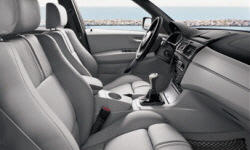