Absolutely the most satisfying car this muscle-car era baby boomer has ever owned. No more German cars for me!!!

4 door Corvette indeed! Awesome acceleration with Nascar soundtrack under the hood. This car is the ultimate baby-boomer express, possessing the small-block muscle-car era DNA we grew up with. Add in the 6-spd manual trannie and you have a car that can crush all but the mightiest of all those old classics. The unexpected bonus is 26+ mpg on th hwy if you keep it around 70. Massive torque means you can putter around in almost any gear at 1,200 rpm if you wanted to yet shift thru the gears at 6k and hang on; you'll be well beyond any legal speed limit before you shift out of third. Nice little cam lope at idle makes me smile. This car makes me think up stupid excuses to drive it anytime, all the time.

Comparison to BMW M5 is well deserved. The only thing about this car that says Cadillac is the emblem. Truly a world class performance car. It sticks to the road like velcro; great turn-on, great steering feel. GM got it right and it shows that the car's suspension was developed at the Nurburgring race circuit in Germany. This is most likely the best handling four-door sedan Detroit has ever produced.

Brembo brakes are insane! Car stops harder than anything I've ever owned. This is actually a potential liability. Sure, you'll stop in time to avoid the car in front of you, but what about the inferior car following you? unbelievable. I personally believe that accident avoidance is a huge component of safety and this car has the handling chops to get itself out of lots of unexpected situations that would flummox inferior cars. I'm writing this review in 2014, ten years after the car's introduction, and its performance credentials remain relevant as much now as ever. THAT's how advanced this car was when it was introduced.

I like the sharp, edgy stling. It flips the middle finger at all the derivative, worn soap-bar shapes that all blend together after a while. The perfect antidote to blue-and-white emblem overload.

For a car with its dynamic potential, ride quality is the, ahem, 'Cadillac' of performance sedans. Sure, it's unlike any Cadillac well, ever, and would definitely be considered on the firm side of neutral, but it's never harsh or objectionable.

The seats (front at least) are great, possibly the most comfortable I've ever had, and I've already put a couple of 10+ road trips on the odometer tp prove it. That said, the rest of the interior is adequate, far better than the usual crap GM dished out back then, but still fell far short of the contemporary German cars GM targeted. The dash gages are adequate but look cheap, and I'd rather have individual gages for important stuff rather than having to toggle through the single digital info module. The technology was also dated when the car was introduced. NAV is old-school DVD, a compass in the mirror would have been nice, and for some reason this 'flagship' CTS was not offerred with Bluetooth or voice activation that lesser CTS' had. What's up with that? Thankfully, aftermarket solutions abound (GoGrooves X2 is the best) but still.....

Black or silver were the only colors offerred during the 2004 introductory model year (for the 'V'). Silver with the light tan interior is the most executive looking combination IMHO. Later years for this first series V introduced other colors, thankfully.

Even ten years after its introduction this car remains a relevant option for performance minded drivers who need four doors. Some of these cars were tracked and abused by ignorant owners who didn't understand that it's a road car, not a dragster. But still many others were purchased as weekend garage queens and with patience, can be found in excellent 'babied' condition with very low miles, and for around $20k. That makes these cars one of the performance bargains of the century. And Hagerty (the collector car insurance company) has identified the 2004 CTS-V as a future collectible. Exclusivity (only 10k produced '04 thru '07) accompanies ownership too! 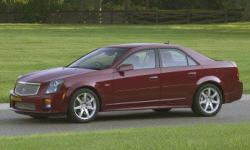 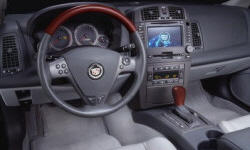