With premium fuel hovering above $4.00 per gallon and police enforcement of speeding advancing in sophistication, the Chrysler 300 SRT8 has no reason to exist. It is a gas guzzler by any measurement and its lack of engine sophistication lags behind the new turbo/supercharged engines coming out of Germany. What it lacks in sophistication it makes up for in pure excitement. It's fun to drive, it's big enough for a family of 5 and it costs roughly half what the German 4-door equivalent would.

The interior is higher in fit and finish than the 1st gen models, but there are problems.#1 Interior color choices are severely limited. Black or Red leather seats and arm rests - with "Sepia" (looks like Peanut Butter) joining the lineup for 2013. Unlike BMW/MERCEDES, Chrysler isn't ready to offer white or cashmere leather. It's sad because even KIA is doing so in their new Cadenza.

Uconnect Touch 8.4n is by far the most refined and simple to use Navigation/infotainment system on the market. The German's are too complicated, Cadillac's C.U.E. is too slow and Ford's MyFord touch has been as bugged as a NYC Mosque. Unfortunately, it's the simplicity that actually hurts the system. The Garmin graphics - as accurate as they may be- appear to be drawn with thick crayons. I actually miss my 2006 SRT's 'REC' nav model's ability to scan an area via thumbstick.

Though the car rides on a set of 20" wheels, the ride quality is never punishing and remains firm without harshness. The Sound deadening materials keep highway noise, honking, sirens and even jackhammers at bay.

The SRT8 model is all about performance, but the cost is the poor fuel economy. 0-60 sprints take fewer than 5 seconds and Quarter miles are done in fewer than 12.5. Unfortunately, the more refi ned engine isn't as throaty as the old model. Starting my 6.1 via remote was something I looked forward to each time I drove it. This model is quieter and doesn't let on what power lurks beneath.

This car has a 6.4-Liter V8 engine which produces more horsepower and torque than you'd ever need for any passing situation or any driving situation. That is, unless your las t name is "Andretti". The first of the 2nd gen 300 models I drove was the 390HP V8 in the AWD model, followed by the Pentastar V6.

The exterior of the new 300 is more refined than the original, but it's lost a lot of its character in the translation. The first car was littered with 3M-tape stickons: window chrome outlines, side bumper guards, and various other chrome bits. Any "tuner" with a Pep Boys giftcard could mix and match, add or delete and general make a mess of their 300 at will (and I do have some pretty ridiculous pictures of modded 300'sThe new model requires nothing. My car already had legal window tints installed by the dealer. I went on Ebay and purchased two more metal SRT8 emblems for the fenders. My masterpiece complete.

Until you actually drive this car, anecdotes about its steering and handling can't sync in. It's so powerful it feels lighter than it is, but the new beefier steerin g wheel makes it feel like rolling an SUV. It's big, it's fast and the steering returns a decent amount of road feel. This car is all about burnouts, donuts and drifting. Unfortunately some f unctions should be more driver-oriented to sweeten the experience. The ESC button is placed for the passenger to toggle. WHY?

My insurance is $195 per month with numerous discounts for my driving history. This car's depreciation is relatively good when you have the SRT model and there's no accidents on the history. My 6.1 had some damage on its carfax and 65,000 miles with some bumper paint damage and I still got $18,000 for it which could have been higher without damages and a clean carfax. If depreciation worries you, the SRT model is the one to buy.

I'd be a damned hypocrite to tell you not to buy this car after having owned 2 of them. If paying $4.15 (or more) per gallon of PREMIUM UNLEADED in a car that gets less than 15 miles per gallon as it chews through tires and brake pads doesn't bother you - HURRY UP AND BUY! 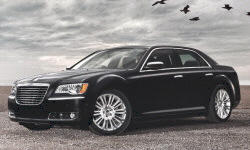 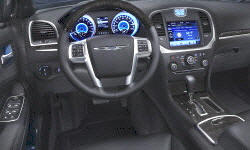