Definately a love it or hate it design. Me, I love it. I love the lines of the car. It's a convertible, which looks more aggressive than the hardtop. I actually prefer the grill style of the 2005, but I'm happy. My on real complaint is with the roll bar. I think that it detracts from the profile when the top is down. Most PTs are considered to be "chick car"-ish, sort of like the Beetle conv. But I don't care, I love it in black only. The model is a Turbo GT and the upgrades are limited to the turbo badge, and the chromed wheels. Unfortunately, the wheels, while they look nice initially... they are really cheap and are a pain to keep cleen.

Not terrible, actually attractive at first glance, with silver paint and some faux-carbon panels. But it is a 2006 Chrysler... so there is plastic everywhere. But overall I'm ok with it.

Black with a Black convertible top was the only choice I considered. I love it.

I test drove the non- turbo model and hated it. Weak and gutless. I do a ton of highway driving. Without a turbo it would strain on long inclines and frighten you trying to merge onto a crowded highway. The turbo elilminated that and I found that I always had plenty of power to do what I needed to do. The transmission is clunky and not very smooth. Unfortunate, but tolerable.

One would expect to get much better mileage from a car this size, however 17 city/23 highway is what I actually get.

I have logged many miles with family in tow. There is ample space in both the front and rear. Actually surprising considering the diminuitive size of the PT. The extra leg room for the rear passengers comes at the expense of cargo space. Tiny trunk that is difficult to access if you are tall. Costco runs are always interesting.

The car was a picture of reliability until 100,000. Can't really ask for much more than that, I suppose. The 43,000 miles since then has been one thing after another, with a few mystery issues that remain unsolved. The A/C, Transmission, and the Electrical system have all been frought with issues since then.

Considering that I'm nearing 150,000 miles on a 7 year old Chrysler, it's safe to say that I've loved my PT for a long time. But it's looking more and more like I'm near the end. I now have the highest milage PT at my dealership. What do I love about the PT GT Convertible? I love the style. The comfort of driving this car for hundreds of miles at a time. Plenty of passenger room. What don't I love? The milage: The range is roughly 300 miles highway. With a 15 gallon tank, I was expecting better. The turning radius: There is no such thing as a 3-point turn in a 2006 PT. Inconceivably large turning circle. One may as well be driving a motor home when considering a U-turn. Never understood that. Every PT owner feels that pain. The Daimler electrical system: Chrysler inherited the nightmare from them.

More About the PT Cruiser 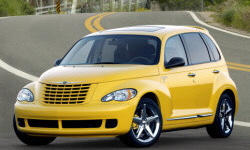 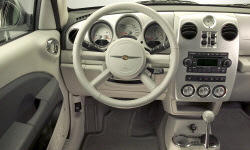