This has to be one of the quietest vehicles I have ever owned and that is comparing it to a Mercedes ML 63 and a Range Rover Sport ATB. The active noise cancellation really works and I can have conversations with the people in the back at normal voice volume. There is also little to negligible wind noise and on my last four hour drive, the Denali was subjected to cross winds, head winds and blowing snow.

Impressed with the current styling. There is a soft touch dash and the centre console cover is also padded. The only hard plastic is on the lower portion of the doors. The dash is clean and is not covered with a lot of buttons, the switchgear operates smoothly and fluidly. The leather seats are comfortable and has contrasting stitching.

Took this trip on a ski trip and drove to Jasper in two wheel drive. No issues and great fuel economy. According to the truck readout, I averaged 12.8 litres per 100 km driving at 124 kph. On the return trip, the roads were snow and ice covered with only one lane cleared (divided highway). I had the truck in the auto setting and there were no issues with traction. I was able to drive the snow and ice covered lanes with no difficulty. I found the Denali to be well planted and stable. I would also like to mention that the truck is also equipped with Blizaak winter tires which also contributed to the good performance. My return trip fuel economy was 13.5 litres per 100 km at an average speed of 120 kph.

This is my first truck and probably to most truck owners, this is no surprise but there is a lot of cargo room in the truck bed and inside the truck. I have the short box version of the truck and had the box sprayed along with purchasing a foldable cover (tri-fold). Found that despite all the room in the box, the items I placed in the box would slide around and also end up at the front of the box. I ended up keeping a hockey stick in the box to drag items out. After about five months of ownership, I purchased a GM rubber bed mat. This pretty well eliminated the sliding around as it is more grippy. I would like like to see more cargo management options for the full size trucks. GM doesn't appear to have many choices as compared to Dodge. The interior cargo storage is voluminous with the centre console being able to hold my laptop or hanging folders. I also have the under seat storage option in the back which also helps with storing small items or if you are travelling in the winter, I store items that shouldn't freeze.

This is my first truck and didn't know what to expect but I have brought the truck in for a variety of noises which were all fixed by the dealer. This ranged from a rattling noise in the sunglasses case, a parking brake cable that was making rubbing noises and a squeaky centre console lid.

I am not too sure why GMC would not include an electric tilt and telescoping wheel for their "Professional Grade" truck. Two separate levers to tilt or telescope the steering wheel - c'mon GM. I am really trying to like OnStar and they do have some good features like being able to start the truck using the OnStar app but the app takes awhile to work and sometimes times out. I also like the ability to search for an address in the app and send it to the vehicle BUT after the free trial is over, GM wants about $45 per month for this feature - BMW offers a similar feature using Google maps for less money. 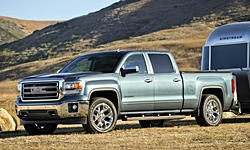 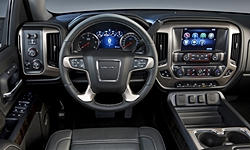