Well I have to say this car is awesome for the money. I do suggest test driving, if this is the segment of car you are interested in. All of the following are my impressions, but some are subjective. I don't work for, or have any ?ins? with this manufacturer, or any other for that matter.

I personally like the look of it better than any other compact. Cohesive lines and design is what I like. It gives a mildly aggressive look with class, IMO. Especially the front view, front quarter view and side. The back is somewhat generic, but clean. The rear lights add an interesting design touch. I love the wheels. In the compact car size segment, I only really like the look of this, the BMW 2 series, Audi 3 series, Mazda 3 and parts but not all of the Chevy Cruze. Most other cars in non compact segments are too long or small for me, and I have no interest in SUV/CUVs. I require strong power and torque, and hatchbacks were low on my list because the other hatchback car I own is enough for moving big stuff. I wanted a large trunk to hide stuff and quiet the car, and lower longer lines. My choices are limited.

And this lack of choice is likely to get worse in the future the way sales trends have been going (away from my preferences).

I test drove two of them, a manual Tech (top trim) version and a DCT 7 speed auto standard version. The first test drive was mainly to check some of the additions the Tech version brings - the Infinity audio system, larger screen Nav and rear parking sensors. Things I wanted along with the dual zone climate control and auto dimming homelink mirror that came with it. Although most of my cars have been manuals, my wife doesn't drive those, so for overall convenience the auto was my choice.

The shifter and clutch are fine, smooth action and easy to adapt to. In short order, I never thought about how it was. No vices, which is a compliment. The Infinity audio is at least the equal of the Bose system in the Buick Verano turbo (my previous compact car), perhaps better, which surprised me. The audio in our Elantra GT, the other car we own, isn't great at all.

The interior gives a very ?solid? feel, and is quiet compared to many other compact cars (but not all). This is perhaps my biggest favourable surprise, as I was prepared for compromises from a cheaper lighter car aiming at performance. The exhaust note comes through when you are on it, but not when at a steady cruise. There is no drone at all and when I hear the exhaust tone I like it.

In terms of the interior appearance, other than the lack of colour differences in the panels making it dark overall, I think the dash layout and controls are about perfect. No tablet-crazy-glued-to-the-dash look which I hate, nice size (8?) screen integrated into the design, dials and buttons for everything! Plus redundant controls, bonus. Its like actually getting a car the way I want instead of paying and being forced to live with changed methods I never asked for!

I found the engine to be a ?bit slow to wake up?, turbo lag perhaps but I've experienced that in lots of cars and I'm not sure that's it. If I can describe it, its like the old engines with timing retarded too far, not a case of delay then 'hello its now spooled up' like turbo lag. Or put another way, if you are aware of how some Hyundai's and Kias have excessively sensitive throttle tip in (eg; Genesis coupe V6) that journalists commented on in years past, then its like they corrected that and went too far the other way. I've also seen a review somewhere that suggested its gearing of the lower gear range in the manual.

Performance was strong when on it, maybe the equal of the Verano despite the power to weight and torque to weight being marginally worse. There are few detailed reviews out there so far, I've read someone quoting a magazine getting 0-60 in 6.4 seconds and someone posted a video of getting 0-60 in 7.2 seconds, another at 6.8 seconds. Seat of the pants feel, compared to my Verano (tested at 0-60 in 6.6/6.8 seconds) is this car will be similar, especially when passing cars on secondary highways which is my main interest. Its not a Gti (or above, ie; R, S3, 240i etc.). Perhaps closest to a Gli. Deciding how much is enough for the $ is what it comes down to.

The DCT auto works with the engine a bit better I think. Still there is that hesitation getting to ?full action? in the right gear. Its less than experienced in most normal automatic cars AND CVTs (Nissan anyway), turbo and non-turbo alike. I found the DCT to be a nice compromise between a VW/Audi DSG and a normal automatic, preferable to both in my opinion. For example, shifting is much quicker than a normal auto, and smoothness getting away from a stop and shifting time and smoothness changing between forward and reverse is much much better than a VW/Audi DSG.

Standouts about the car to me;

Quiet (not Verano levels though, but its a different type of car). NVH is very well controlled indeed considering that the suspension is firm. Tons better than a Mazda3 for example.

Steering ? the positive comments in a few reviews out there are right, to me its perfect weighting (subjective), consistent precision and no on centre dead zone that I could notice. The steering in the BMW 240i I tested felt no better, and that cost $ 58k Cdn$ all in. Still I see some reviews out there that criticize the steering? Most are using the heavier sport mode, I don't, finding normal default the best.

Suspension and handling - Firm but not jarring, and I found lots of bad pavement to test (good time of year to test drive after our recent thaw caused some road breakup and small potholes). Did a highway on ramp at g force inducing speed and wasn't near its limit. Very composed balance. This is really not Hyundai as I knew it, its a major step forward. You will notice immediately on your test drive.

Value for money ? Huge. No its not an Audi S3 or a BMW 240i, or a Golf R but this is a fraction of the price, and I'm not throwing as much as $ 8.5k Cdn. away to tax, excessively high admin fees/ frt/pdi, just to get ?price of admission? to the good stuff. For myself, I don't drive that much anyway, get little or no benefit from AWD so I'm looking for reasonably priced grins. :) If money was no object or I wasn't somewhat conservative with managing my money, then it might be a different story.

Things that were fine/OK/no problem, but not outstanding;

Visibility ? Great to the front and sides, and the A pillar is average, not a vision blocker like the Verano is. Rear is so so, I'd say average for today's cars which (except for hatches) designers feel they have to jack up the size of their rear ends to emulate a coupe, and substitute a camera to make up the loss. I'd much rather see everywhere, and not via a camera. Still, the car is 5? shorter than the Verano and rear visibility is about the same.

Seats ? Comfortable, no problem, but its disappointing neither front seat is power adjustable. I managed to find adjustments that made me forget about judging the seats, so they must be good. Unfortunately test drives are never as long as a trip, to see if discomfort or fatigue develops (comment applies to all cars). No complaints so far, I found a good position.

Mileage ? I really don't care that much about this, but the engine is recommended to run regular gas, which saves compared to what I'm used to. The mileage ratings are quite a bit better than the Verano, but I didn't see it on the instant reading display. Might have something to do with my throttle pedal depression. ;) Or, in comparison, how much of that is needed to motivate the car in the way I'm used to. I'm not sure. Initial thinking is the Verano seems to require ?less pedal movement?.

I'm sure I missed something important, either in the test drive or these comments. Anyway, I hope this was helpful, and gives some further insight into a vehicle that, in the real world, fits what could be affordable for many. In my shopping, in the end I didn't give up to sticker shock even though I could have afforded a more expensive car. I'm delighted with my purchase so far.

More About the Elantra 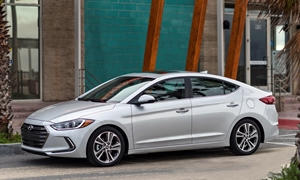 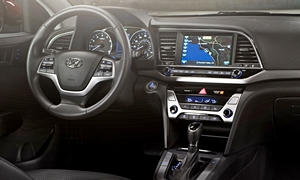