We were looking for a coupe for some time, but kept balking at the impracticality of the rear seat. When we saw the XF, it had the look of a stylish coupe while still being a sedan. Best of both worlds for us!

I like that it is different. I think it is pretty unmistakeable. Mostly wood, leather, and metal, though there are a few plastic parts, mostly in the rear. This characterization will probably sound cliche, but the term is truly apt: future-retro.

Very comfortable ride while still feeling well in contact with the road, if that makes sense. Well damped without feeling the least bit harsh. I look forward to many long trips.

The controls function really well, with an almost minimalist look. The shift knob is really cool. I usually prefer to have as many dedicated controls as possible, but the layout on the XF is really useful, with its combination of buttons and touch screen.

Two of the features that helped put the XF over the top for us were the Blind Spot Monitor, which indicates in the each side mirror if a vehicle is in its blind spot, and the Heated and Cooled front seats. Not earth shattering, but both very useful for us

More About the XF 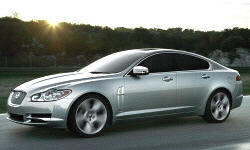 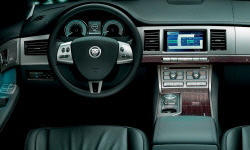