2013 Kia Optima Pros and Cons at TrueDelta: Looks and performance from a surprising company by jasonstone

Kia's brand reputation may be working against it, but if they continue producing stylish, comfortable, polished vehicles like this... they have every opportunity to turn it around.

The exterior styling is fantastic and looks far more expensive than the brand would otherwise suggest. Kia's Chief Design Officer, Peter Schreyer was a former Audi designer, and that influence is apparent. While styling is obviously a subjective category, I've yet to encounter anyone who couldn't admit the Optima is an attractive vehicle. The usual reaction, in fact, is one of surprise upon learning it's a Kia.

I find the interior styling to be very pleasant, but I also have the SX Limited, which is slightly "dressed up" compared to other trims. I've owned two Acura TLs in the past, both of which I loved, but both of which had extremely busy, button-heavy dashboards. I find the Optima to be a nice blend of modern/tech and the austere, Teutonic style of the German makes.

The SX Limited has the 274 HP turbocharged four-cylinder engine, which is more than sufficiently powerful. In comparing to the 2010 Acura TL I had, (3.5L V6 at 280HP), there's a hint of turbo lag with the Kia, but it's still quicker to 60MPH. When it hits its peak, the pull is almost alarmingly strong. I generally leave the car in ECO mode (which improves city fuel economy), but when I stomp on the gas, the car definitely puts a grin on my face. I've heard the non-turbocharged engine is a bit weak, however.

I find fuel economy, in mixed driving, to be on par with a V6 of comparable power. I usually get about 24 MPG in combined driving. However, on a recent road trip, I had 32 MPG on one tank. It's perhaps slightly better than the Acura TL I had, but one big bonus: the Acura required premium unleaded. On the Kia Optima, however, the manufacturer only calls for regular unleaded. Over time, that can mean a significant savings.

The SX Limited is not an inexpensive car. The MSRP on mine was just shy of $36,000. I always lease cars, though, and I will say that my monthly payment is about $40 lower than it was on the 2010 Acura TL I had (which had a nearly identical sticker price). I'm assuming that Kia was simply offering more aggressive discounts than Acura, since their residuals can't possibly be on par. However, though Acura has great cachet and brand image than Kia, I'm much happier with the Kia so far.

While the driving position is fine, I find visibility through the rear-view mirror to be compromised by the very flat rear window. The Optima's extremely sleek greenhouse looks sexy, but it does come at a bit of a cost in terms of visibility. (Fortunately, at 6'2", I don't have any issues in terms of headroom, which may be surprising.)

Kia doesn't have the best reputation, though I get the sense that it's slowly improving. Speaking personally, I would have laughed at the idea of buying/leasing anything from Kia even three years ago. However, in that time, I've had two: a 2011 Kia Sportage EX and, now, a 2013 Kia Optima SX Limited. The mediocre brand image is a unfortunate, because if you slapped another make's emblem on this car, people would probably be absolutely gushing over it. As I said, I don't think their image is improving, though.

More About the Optima 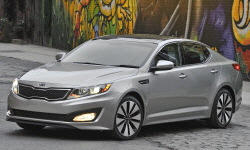 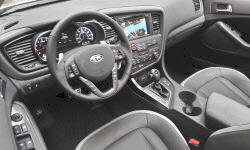