2004 Kia Sedona Pros and Cons at TrueDelta: Better to buy a child's PowerWheels car than a Kia Sedona. by Heroisum

If you want to get to know your mechanic on a first name basis and slowly drive him insane, buy Kia.

Not totally sure because we took ours in for a timing belt replacement at 60,000 miles, and the mechanic was so unfamiliar with working on Kias that he reassembled something wrong, destroying the motor and transmission. They put another engine in with roughly the same mileage along with a brand new transmission. Hasn't ever run quite the same.

Not a quiet vehicle at all. We have to yell to have anyone in the third row hear us from the front. Anytime we ran the AC each summer, the van would occasionally groan for no apparent reason. We dubbed this sound the "van fart." Since about 80,000 miles, the left front wheel has made a noise we can only describe as a small plane taking off. For both of the above problems, we have had mechanics try to figure them out several times, and they couldn't.

Built only for short people or tall people who like to have their legs continuously bent at 90 degrees.

Easily the cheapest, weakest, lowest quality materials possible short of paper. We bought this van new, and by 20,000 miles, things started rattling and squeaking. At 103,000 miles now, plastic cladding around the bottoms of the front seats has cracked and broken. Plastics used throughout are only slightly above disposable grade. I've lost count of the number of sensors that have gone bad in this heap. If not for the passenger room, I would prefer my first car, a hand-me-down 1975 Ford Mustang II over this Kia.

We have NEVER been able to keep this van in alignment despite multiple tries. In 100,000 miles we've put four sets of tires on the thing. Lousy turning radius and generally drives like a tank.

We have been stuck with this lemon for far too long. When the check engine light came on the other day and my wife asked what she should do if it stalls, I said, "just leave the key in it and walk away." Should have done that at the dealership.

More About the Sedona 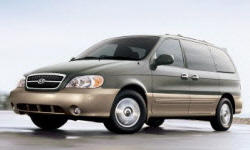