2014 Mazda Mazda5 Pros and Cons at TrueDelta: The best - and only - compact family hauler. by peter

If you're like me, and suddenly have a need to haul around one or two kids on a budget, you'll find there are few economical options. Most family haulers are huge whales that chug on gas. The "import" options are pricey. The Chrystler options are unreliable. CUVs are most, if not all, of these things.

Enter the Mazda 5. A true minivan. Easier on gas, handles like a car, and has reasonable reliability. It's not perfect. The platform and drivetrain are showing their age, and the cost-cutting era it was born in do it no favors. But for affordable transit for 6 it's your best ticket.

There isn't really a category for the #1 reason I bought this car: Seating capacity. What I really wanted was an affordable, 6-8 seater station wagon. Something that is sized and drives like a car, gets fuel economy like a car, and is priced to my budget. The Mazda5 really stands alone. It has no direct competitors. There ARE CUVs of similar disposition, but they are more expensive and have other tradeoffs. I wanted a CAR that seated 6, and this was the closest thing.

The Mazda5 doesn't get great milage. But it's better than other minivans and most CUVs. Of the alternatives I shopped, the Mazda was the most frugal on gas.

The 5 drives very, very close to the car (Mazda 3) it is related to. I used to own a 3, and loved the handling. The 5 is slightly larger and has more body roll, but it's so close! I fell in love with the communicative steering and easy control.

It's not a Honda or Toyota, but it's also not a Dodge. One alternative considered was the Dodge Caravan, but a quick look at the numbers spooked me. Talking to actual past owners killed the deal. I wanted a keeper.

I was born old inside, it seems. I'm only 30, but I hate most car touch screens. I have no desire to own a car with a bazillion radio modules connected directly to the CAN bus, easily hacked remotely. I absolutely love the feature mix on the Touring. It's so perfect I can't believe it. Bluetooth, USB and Aux for connecting to the head unit. Automatic climate control. Cruise. Power windows and locks. Fog lights. Rear backup sensor. But manual seats (why do people like power seats? I don't! Pull a bar, scoot it and be done!) No immediately outdate navigation. No big-brother cell radio. It's like Mazda took all the features from the last decade I loved, and omitted the ones I don't like. Love it!

I am not normally one who cares about hard plastics. You'll never find me stroking a soft, stitched dash in envy. I just want something that looks OK and holds up. IMO, the 5's interior looks OK. But it does NOT hold up. The hard interior plastics scratch like nothing I have ever seen. I bought my example with just 1 year and 10,000 on the odo, and it already looks bad in spots. A couple interior trim pieces are just missing. Scratches appeared in bizarre places I would never imagine. The rear cargo area already has signs of a doing hard work. It's a tradeoff I'm willing to take to get the whole package, but just marginally better materials would have gone a long way.

The 5 has horrible crash ratings. There is no way around it. I don't expect it to be great at tests invented after it was, but the side-impact results? C'mon! Additionally, the brakes are nothing to write home about. They are adequate, but nothing more. Again, just a slight bump up would make a huge difference.

If only. If only Skyactiv came out during the 5's redesign. While gas usage is better than the competition, it's far worse than it could be. Just popping in Mazda's latest engine and tranmission combo would surely give several more mpg. Just a 10% improvement would make me happier.

The front seat head rests are horrific. They jut out and force your head, neck and entire upper back into an uncomfortable position. I'm sure this is part of some ill-conceived anti-whiplast design, but it's awful. I'd rather risk some whiplash than drive every day with this!

It's an ugly car. No two ways about that!

The engine is adequate, but about 20 more horses would be welcome. Puttering around town, I feel no lack of power. But weigh it down for a road trip and try to pass going uphill - you're going to run out of power. It's a price I'm willing to pay for better fuel economy, but Mazda's latest drivetrains have shown they can give you a few more ponies and much better milage. A Skyactiv Mazda 5 would be a worthy upgrade.

Mazda's official line on the 5 is "you cannot tow". That's a drawback, especially for such a small van. I'm not looking to tow an Airstream here, but the ability to haul some bikes on a utility trailer would really expand this vehicles capabilities.

Mazda USA might not say you can tow but the UK site shows 1300lbs and etrailer show hitches with 2000lb and 200lb tonuge weight.

That is true, but I'm leary of explicitly violating the US owner's manual while under warranty. There's a whole host of potential repairs they could (falsely) blame on the existence of a tow hitch...

i have not towed anything with my beautiful mazda5. all i can tell everyone is that this minivan is great for pricing and reliablity.

More About the Mazda5 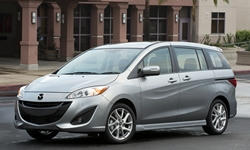 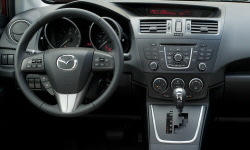