2013 Nissan Pathfinder Pros and Cons at TrueDelta: Not as impressed as I wanted to be by clearedforils

I am a huge Nissan fan and have had 4 models before the Pathfinder SV, but I would not purchase again.

Cons: Uncomfortable for driver on long distances, confusing stereo & climate controls, useless "navigation screen" (SV version does not have navigation), CVT Transmission has slight delay when pressing the gas hard to pass, inconvenient plug in for iPhone (bluetooth does not connect to play music).

The styling of the 2013 Pathfinder was the reason we went to the dealer and test drove this Nissan. We chose the Arctic White that shimmers in the sun. Overall we really like the looks, from the grill and headlights, nice rims and tires and sleek lines.

With 10,000 miles on the car, we have averaged overall 21.3 mpg, according to the trip computer. Our average speed is 35 mph. Most of our driving is in town and it still seems to get great mileage for such a large car.

The first thing we asked the dealer when we got in the car was if it was on. Nissan worked hard to eliminate as much engine noise as possible from the cabin. Of course nothing is perfect and you can hear the engine during high RPM's, but overall it is a quiet ride.

Over the past 20 years I have owned a Sentra, Maxima, Titan and Altima. The main reason I purchased the Pathfinder was because of my previous experience with Nissan. Their cars have been very reliable, with my Maxima having over 200,000 miles on it before it was traded in.

We have the Pathfinder SV which is the middle of the line model. After driving this car for 8 months, the climate control is still confusing, specifically as it relates to rear controls. The screen at the top of the dash, which appears to be navigation is nothing more than a big screen to display radio station and climate control info. Personally I think it is a waste of space and not at all functional, since it is not touch screen. The audio and climate controls are not in a convenient spot.

I am 6'1" and my wife is 5'7". I like to drive with the seat all the way back, but found on long road trips (longer than 2 hours) my shoulders and neck would start hurting becuase I had nowhere to rest my arms. The door armrest and center divider are too low to rest my arms. To compensate for this I had to lower the steering wheel all the way and move my seat up. When I first complained about this to my wife she thought it was because of my height. However, when she drove, it was about 2 hours before she felt the same. When she moved her seat closer to the steering wheel it got better. With all other previous cars I have owned, I have never felt this kind of fatigue while driving long distances.

I will start this off by saying that the CVT transmission in my 2009 Altima was responsive and quick, there were never any problems when I pressed the gas to get around anyone. The 2013 Pathfinder, on the other hand, seems to lag a bit. When you press the gas, the car hesitates for about 1/2 a second before it kicks into "gear". Once it is ready to go, it is plenty powerful. I realize any automatic transmission has some latency, however, since I was able to compare this with my Altima it is dissappointing for the newer version of CVT Transmission.

Maybe this portion of the review is unfair, however, we went from a Toyota Sienna to the Pathfinder. To this date, there was nothing that we were unable to put in the back of the Sienna. With three kids, we have a lot of stuff to take with us on road trips and packing the van was never a problem, however the pathfinder lacks the room to fit all of our bags. Our kids were much more cramped on our 500 mile trip than they have ever been, due to the lack of space for our luggage. I realize we went from a van to an SUV, but if anyone reading this is considering the Pathfinder for their family, and need the space AND seating, this car may not suit your needs.

The reasons we bought the Pathfinder was we did not like the new minivan styles. Our kids are getting older and we will not be needing a minivan in the next few years. But we did want the 7 seats, which very few SUV's have, that get as good gas mileage. 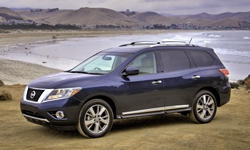 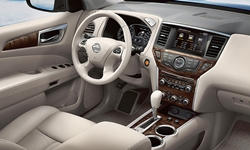