The nice thing about getting a Toyota as a rental is I feel pretty confident it won't have problems. In fact, there were no odd little quirks or oddities that I'm used to seeing due to the way rental cars are often treated.

The interior of the Corolla is actually pretty nice for an entry level car. Nicer than the 2010 Mitsubishi Lancer that I own. There is something to be said for Toyota quality.

No nav system in the car but the audio jacks were at least current where some other brands I've driven still use all kinds of odd input cords. Simple USB plugin and a decent stereo is all I need.

For an entry level car it seems put together well. No noises indicating loose parts, no odd rattles, every window seam was solidly affixed. A lot of little things that wear quickly or look poorly installed were not present in the Corolla.

Performance was very sluggish. Part of the week I had it involved a long drive at highway speeds and the engine noise is extremely loud at 40mph or higher. I drive a CVT equipped Lancer that is much quieter and performs great.

Toyota is the king of the boring-mobile. Just because a car is an appliance doesn't mean it can't look good. Plenty of other entry level cars manufacturers seem to get this, but not Toyota.

Between the excessive engine noise and just the natural tendency for cars of this class not to have much sound dampening it was extremely noisy.

Visibility is fine but the car seemed cramped. Again, I drive a similar car, a Mitsubishi 2010 Lancer, that is still plenty roomy. Cabin space is poorly utilized. 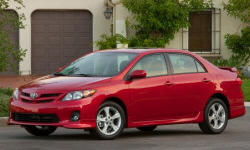 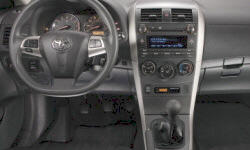