2010 Toyota Corolla Pros and Cons at TrueDelta: Econocar with nothing more by samanika

The car is very practical and cheap to own/maintain, but it isnt as good as it can be. Toyota seems to have done just enough with it to get by and keep it competitive enough to sell, but if it wasnt a Toyota, it wouldnt.

Fuel economy is great, as expected with 1.8 I4. EPA rated city driving at 28MPG but i have never been below 32. When cruising at 65 with A/C off, 40MPG is possible. The sole reason i bought the car was for economy. Paired with great MPG and great price, I would say this beats out a Prius if you want to save money.

I am 6 foot tall, 250 lbs and have plenty of room in the front seat. The driver's position holds me well and i do not feel like i am falling out of the seat when cornering. The passenger seat sits higher than i want, but there is plenty of room there as well.

Exterior is styled conservatively and is easy to clean because there are no odd crevices and sharp corners. Minimal use of black plastic is a plus to prevent sun fading.

I have given it a thrashing and nothing has broken. It is a Toyota so it probably wont be breaking any time soon. Interior components arent top of the line, but they are tough. Seat is firm and will likely last a good while.

Braking works great, even on wet surface thanks to ABS. Car is light and stops quickly even with LRR tires.

Toyota has never really made a performance model. The 1.8 I4 is good for slow, city driving, but on the highway, acceleration and passing is more of an issue. Competition performance is non existant. There is a 2.4 I4 which adds a meager amount of horsepower, but not enough to keep with competitors. The "sport" model has some silly plastic bits and fog lights added.

Handling seems fine, until you give it something it cant handle. Grip will be fine until it is not. There is not a "warning zone" of tire squeal to let you know you're at the edge. Once the tires go, they dont affect the direction of travel much at all. This is more of an issue in rain or comprimised road conditions where you can fairly easily go into a slide. Hydroplaning is an issue in heavy rain.

The engine is pretty quiet at idle, but there is not enough sound insulation in the vehicle. Even at idle you can hear the engine and engine components making noise, and on the freeway at 70+ the tire noise becomes bothersome quickly.

The trunk has a good amount of room but it is hard to utilize with hard/square objects. This is twofold, due to both support beams coming out by the back seats and the speakers hanging down from the top. It is also difficult if not impossible to get a simple icechest into the trunk because of the narrow opening. The plastic bit below the carpet isnt quite strong enough and will warp irrepairably under too much weight.

Warranty is ridiculous. Toyota of all people should be including a 100k+ warranty on all of their vehicles. The Hyundai Elantra (and Kia), which is cheaper, includes this 100k warranty at no cost. Chrysler and Mitsubishi also give a free 100k warranty. Toyota is so bad about this they dont even bother telling you the warranty length on their website. For a manufacturer that is supposedly the leader in reliability, it just doesnt make sense, except that they are padding their wallets with your misfortune. The dealerships also pad the scheduled maintenance with verbiage and things that dont need to be done so they can charge you more, though this is probably commonplace.

It does have a tow rating of 1800. Some cars in this class cannot tow anything according to manufacturer specifications.

Very boring, and there arent individualized bits you can change out easily to make it less boring. It is simple and functional, however.

I bought my 2010 Corolla for 16250. The 2011 model was priced well above what i paid for seemingly useless external cosmetics. The interior of the vehicle, the engine, the drivetrain, the performance, was all the same.

With so many competitors such as Kia/Hyundai and Ford pushing a seemingly superior product, Toyota needs to step up their game. The Corolla has what you need, but not what you want, and that's a killer. 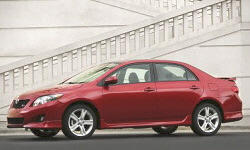 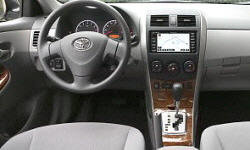