2007 Toyota Corolla Pros and Cons at TrueDelta: The Regularest Regular Car by MCSpectra

A member in Florida, United States

The Generation 9 Corolla is the first Corolla that isn't a Corolla. The Gen 9 is based on the Corolla Altis, a bigger Corolla. For the US market, Toyota brings production over to the joint venture plant in California, making this car an American car, despite the name. Besides that, it is a very good car to own. You get this car not because you want it, but because you need it. When you don't have the money for something you want, and need something to get you where you're going everyday without a fuss, you get the Corolla.

The Gen 9 Corolla's birthplace and sudden lineup change doesn't detract from the car's longstanding reputation for reliability. If you maintain it, it will last a long, long time with no serious trouble. Having seriously used one of these, I found that as long as it is maintained and somewhat cared for, it will always take care of you. I also know that it is an okay car for heavy use, but that's not really the car's role. It will hold up to a surprising amount of abuse over its lifetime without falling apart. If you have to do heavy residential driving or accelerate to high speeds daily, you may find yourself wearing out brakes and transmission clutchpacks at an alarming rate.

The Corolla is an entry level car, but that doesn't stop Toyota from putting a lot into inexpensive materials. Despite the use of plastic everywhere, the plastic is well made and well attached. The interior does not rattle on rough roads, not even a little. The hardware outside is also well attached, and can sometimes be a bit tedious to service, but you can guarantee nothing is going to fall off the car either. Except the hubcaps. They are notorious for being the "I took a left and they took a right" kind of hubcaps. It is socially acceptable to replace them with $20 walmart hubcaps which won't fall off so quickly.

While these cars are all way past their original warranty, the maintenance cost of these cars is still very low. Few things ever go wrong, and if they do, you can easily get the parts for them. Beware, though, you should only get OEM Toyota parts, as cheap aftermarket parts are not as well made, safe, or reliable, even if they "meet or exceed OEM standards". This car is also very easy to do an oil change with in your driveway, as the oil filter is located where you can easily reach it from the front of the car underneath, next to the drain plug. It also goes a very long way before needing an oil change. Longest I have gotten, even on an old, tired engine that sees 4000 hard miles a month, was 7000 miles on full synthetic. And that is with a good quality air and oil filters.

The Corolla has changed from the sports car-like positioning of its predecessors to the SUV-like up high and all around position. You sit high and can see all around pretty easily in this car, even though it has the higher door lines of the 2000's era cars.

The Corolla is not a sports car, but it handles reasonably well anyway. The suspension strikes a balance between comfort and responsiveness, that lets it be a reasonably comfortable ride, but still can make turns. It won't float like a Cadillac, but it won't bounce like a 911 either. Handling is very understeer, a manner that Toyota calls "safe". If you manage to swing the back end out without using the parking brake or the feint turn maneuver, you need to learn to drive better.

This car is so regular that you will lose it in a parking lot, because at least 5 other people have one that looks exactly like yours, down to the walmart hub caps that replace the stock ones that fell off last year and the corner scraps on the bumper when you accidentally the garbage cans. It is the Corolla's biggest curse. It's a perfect getaway car if a police chase is not involved, because it's styling is so bland, and the presence so common, that people mentally ignore the vehicle's existance entirely. And there's nothing really wrong with its styling, it's actually a rather nice looking car. It's just that everyone else has one too, which is why looking at a row of Corollas is like looking at a row of washing machines.

This car gets 25 City, 35 Highway. It looks like it should be able to do better, but it does not. The 3-speed Automatic with Overdrive (4-speed in reality) is dated and is only okay with the engine's performance. The engine itself, the 1ZZFE, has very few flaws, but is the final evolution of a 90's engine design, that gets okay horsepower, but goes through gas more than it should. And when they get older, they do go through more gas than they should. In addition, the engine can't handle E10 in cold weather (regular gasoline with "up to" 10 percent ethanol) without problems, requiring you to spend more on "REC" fuel, which is non-ethanol pure gasoline. On top of that, the drive by wire throttle has a noticeable delay between the hair trigger throttle and the engine surging forward, making smooth starts with the automatic difficult.

If there is one thing that dissapoints, it is the hardiness of the brakes themselves. The brakes are "just adequate" for the car. It will stop fast, and the ABS is flawless, but the brake rotors and drums are just too small, and they go out of round very easy. Every single used Gen 9 Corolla I've test driven had the wobbly brakes problem, and all of them were the Automatics. While this is an automatic car problem, it is a platform problem as well if one suddenly red light from 45 MPH makes your brakes go egg shaped. That said, if you are a regular driver, the brakes will still last a long time. Also, the drum brakes are NOT self adjusting. You have to make sure they get readjusted every 15000 miles, or it will stress your front brakes badly.

There was a time when Toyotas were worth a lot for their age. That time has past. These Corollas are worth little with age, but you can probably get good deals on used ones if you don't mind a few extra miles on the odometer or some battle scars.

Shopping for tires for this car is not easy. Most of the tires you want are not as good quality with the stock wheel size, and for the most part, all the tires you can get are rock hard all season tires or useless low quality all season tires. Fortunately, there are lots of winter tire choices, and you will need them in winter if you have the automatic. The drive by wire throttle has a noticeable delay between when you barely touch the throttle and when the car decides to go, which makes getting going in bad weather very difficult. The unpredictable surge forward will always result in lots of wheelspin and not forward movement. You almost have to do a brake boost start, by holding the brakes with the left foot until the engine surge levels out.

The seats are okay, a nice fabric seat, but still not American size. If you're round in the midsection, it might not be as comfortable as it can be.

This car is pretty basic, even at the LE trim. It has a CD player that can MP3, it has power doors/windows, cruise control, TPMS, ABS, optional TCS, and fake wood trim. And that's really it for features. It works, and that's that.

Corollas have a good spectrum of colors, but the most regular ones are Blue and Beige. If you want to look 10 years older, get the Beige.

The stock radio is easy to use, thanks to the giant buttons, but it's very basic, and that's the only option you get. The way the dash contours, any aftermarket unit will look terrible if it is not designed to fit exactly.

Corollas are very expensive to insure, because they get thieved a lot, and wrecked a lot, and generally make up a large portion of insurance claims. This is because there are so many more Corollas out there on the road than any other car, except for the Ford F-150.

While the Generation 9 Corollas are all getting old and battleworn, they are still good cars that will last a long time, as long as you do your homework and spend the money to keep them repaired in good shape.

The inlaws like their 2011 until it hmgo totaled by a tree. They were taking they insurance money and putting it toward a mid-2000's Corolla when I mentioned to them that some of them had optional side airbags a lnd research would be needed to make sure it had side airbags. 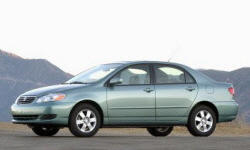 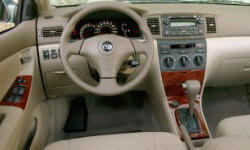