I'm coming from a 2013 Honda Odyssey (Touring). The Honda handles better. Granted we didn't get the SE model but we had an SE when they were first introduced several years ago. The XLE model we got this time around rides a whole lot better than the SE but what comes with a better ride also meant handling isn't as sporty. Steering boost is a bit on the light side but not bad. The soft suspension (especially in the rear) is comfortable but it makes the Sienna feel larger and heavier than it is.

The 2017 Sienna comes with an 8-speed transmission - I preferred the 6 speed that came in our SE model. Not sure it's because our van is new and perhaps the transmission hasn't "learned" how we drive but the shifts aren't as seamless as before. There's a bit of gear "hunting" when slowing down then accelerating (ie. coming to a near stop but the light turns green). Going up a hill, the transmission stayed in gear up to 4,000 rpms despite me easing off the accelerator in hopes of the transmission would shift to a higher gear. Once at cruising speed, the rpm is noticeably low. At 75 mph, rpms was just shy of 2,000 rpm! Must be that 8th gear. We haven't taken our van on a roadtrip yet so not sure if the lower rpm would equate to better mpg's. Acceration from a stop isn't as immediate at our 2013 Odyssey (Touring), once at speed however, the Sienna moves!

The center console is not as useful as our Odyssey. It's too short, we cannot put a tissue box without an edge sitting off the top and this causes the tissue box to slide off when accelerating or decellerating. The power plugs really should be placed below the open cubby on the center stack. There aren't enough USB or cigarette charging stations. The rear cupholders that sits on the ground after you've removed the center seat in the center row....the wife and I aren't fans of placing cup holders on the ground. It's a sanitation with us. Kids track "stuff" into the van, having food sitting where the kids hop over in order to get to the rear seats really isn't preferred. We used to keep a trash container behind the center console in our Odyssey but there are cup holders in the Sienna. We're trying to find a place for the trash container.

Why can't I operate the navigation system when the van is moving? This is SO inconvenient! We'll have to find an audio/visual shop to help us override this feature. Just because the driver shouldn't be operating the nav when the vehicle is moving doesn't mean my wife or my son can't. Having to pull over in unfamiliar and sometimes not the safest areas in order to type in a new address isn't safe either. Where's the center DVD system? As parents we like to control what our kids watch and when. The iPad holder option isn't for us. Besides, how are we to charge the iPads? There aren't sufficient charging stations in the van. Wife really likes the feature so our kids in the 3rd row can hear what she says without her having to yell. Nice feature!

Information on the dash is nice and clean. The navigation however isn't very good. It's cluttered compared to Honda's systems. Touch screens in a vehicle has never been my favorite, finger smudges on the screen is an annoyance more importantly it's hard to hit the icon/button you want when the vehicle is moving. Toyota should really study how many "keystrokes" it takes to complete a task on their navigation. I don't understand why Toyota didn't standardize the memory seats option. It's a minivan! Minivans are driven by multiple people (at least two, the wife and I). Annoying that there's power seats without memory. Manual seats would make the adjustments so much quicker. Center row seats, why are the tracks on the ground? Woman (wife and daughter) who occasionally wear high healed shoes often get their heals stuck in them. Foods and other loose items from my younger kids get stuff stuck in it too.

More About the Sienna 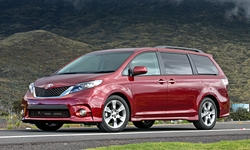 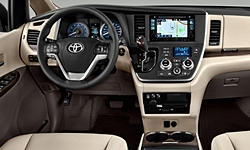