2005 Toyota Tacoma Pros and Cons at TrueDelta: Good, not great. by

The Tacoma Doublecab offers a lot of function in one vehicle. Power outlet in the bed. Storage space in the cab. Comfortable ride and good on- and off-road performance. Overall durability is probably at least as good as average.

But after 5 years of ownership I'm left feeling that the initial price was to high and the truck has the wrong engine. Sure, the engine is acceptable in most respects but a diesel would make a lot more sense.

Chose the Tacoma over its competitors because of it's purported superior off-road abilities, and because of an overall good impression in the media. I find the Tacoma to be comfortable for long trips with better than expected handling and comfortable low-speed off-road use. In these areas I am pleasantly surprised at how smooth and quiet the Tacoma is. I towed a car on a trailer for 150 miles once, on a wintery day where 4wd was used several times. I'd never towed anything before. It was very easy. The Tacoma handled well on the road. The V6 was certainly up to the job.

I wouldn't call the Tacoma pretty but it does have the appearance of being tough and sophisticated (for a truck!). The paint chips and stains easily. This is definitely one of the Tacoma's weaknesses. Another is the factory mudflaps (front especially). They snap off easily and cost a fortune ($141 each) at the dealer. I replaced mine with Husky Liners mudflaps and would do so again in a second. They are easy to install and under $40/pair. Also stronger than the originals.

I get 21mpg in the warm months and only 18mpg in the winter. I use the 4wd a lot when roads are snowy or slippery. I had hoped for better gas mileage and find it ridiculous that there aren't better truck engines available from any of the manufacturers. A turbo-diesel four-cylinder would be much more practical in the Tacoma.

Tacoma Doublecab offers storage bins behind and under the rear seat. I love 'em.

A note about recalls. I bought this truck from a dealer in Pennsylvania and immediately imported it into Canada. There were subsequently two recalls (in both countries) for this model. I have asked the local Toyota dealer to look into this (repeatedly) and received no response whatsoever.

I have never bought a brand new vehicle. First, for money and perceived-value reasons. Second, because new car dealers in general have a reputation for providing lower-than-average customer service and higher-than-average prices on parts and labour. Toyota has lived up to that reputation and has given me no reason whatsoever to want to do business with them. 1. They have ignored three requests for information about recalls on my truck (I'm guessing this is because it's a private import from USA to Canada). 2. They were unable to think outside the box and solve a rattling truck bed issue, but offered to sell me a few parts while they played around with it. 3. Before I bought this Tacoma, I went to a dealership to ask them to find me one with a manual transmission. I never had a call back from that dealer--they made no attempt to sell me anything, even though I sat down with a salesman

More About the Tacoma 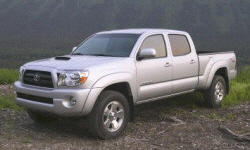 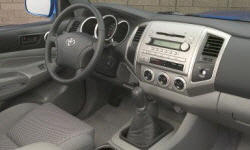