Bought the car in May 2009, have 45K miles on it as of Jan 2013. We love the car-- it combines the security of a hardtop with the fun of a convertible. Haven't had a lick of trouble with it to date.

The 2.0 turbo and the 6 speed manual are a great combination-- it really makes the car fun to drive.

The car is comfy on long trips, and the seat heaters are super. The car is great with the top downā€"if you deploy the wind deflector, you donā€™t get your hair blown all over the place. The faux leather on the seats is fine-- you can only get real leather if you get the LUX model, and then you canā€™t have a manual transmission.

On the freeway, I get 32 MPG with the cruise set at 65. Around town, I get about 30, driving conservatively. On my commute, I find that I get 27 if I drive like everyone else, zooming and stopping. If I make an effort to minimize braking, and coast on the hills and where ever possible, Iā€™ve gotten as high as 35 MPG on the same route. The car does need 91 octaneā€"it will run on 89 octane, but the mileage goes down, so it is a false economy.

We had a short requirements list when we went shoppingā€" a convertible with a manual transmission and heated seats. We looked at the Mustang, Saab 93, Miata, Toyota Solara, Chrysler Sebring, and Saturn Sky. We made a point to test them all with the top up -- all convertibles are great with the top down, after all. The VW was the clear winner in this regard. There have been some issues with roof leaks reported, especially in older cars. Personally, I wouldnā€™t touch a 2007 or early 2008 model. The 2009 and later have not had the problems of the early cars. The key to preventing roof leaks is to lubricate the rubber roof seals every 6-12 months, so they stay soft and pliable.

My car has 45,000 miles on it, and I haven't done anything to it but the scheduled maintenence.

I found the radio to be a bit of a waste, though it works well. It includes XM radio and a 6 CD in dash playerā€"but I never use CDs in the car, as I can plug my ipod in. The 6 month free trial on the XM radio was nice, but the service isnā€™t worth $17 a month to me. Every dealer (for every make) wants between $1500 and $2000 for the in-dash sat nav system upgrade, and VW was no exception. I just couldnā€™t see spending that kind of dough to replace my $129 Garmin. I also wish my car had the audio buttons on the steering wheel-- but that was only included on the Lux, and then I couldn't have my manual transmission.

In 2009, at least, VW didn't give you a lot of options. The Komfort came with a manual transmission, leatherette interior, and no audio buttons on the steering wheel. I couldn't have a leather interior and the audio buttons unless I gave up my manual tranny.

If looking at used cars, I'd check 2008 and 2007 models very carefully for evidence of roof leaks. rnVW changed the design a bit in 2009, leaks are unlikely if you lubricate the seals annually.

More About the Eos 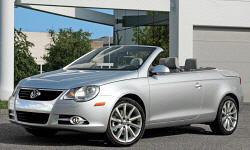 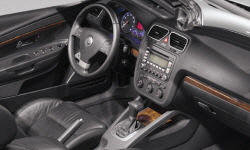