We own one vehicle and require a jack of all trades in all seasons. Volvo gave us just that -- amazing utility, spunky engine, unquestioned safety for the kids, comfort without peer. rnrnWe owned an Aztek years ago and loved it for similar reasons -- no aspect pushed too far at the expense of another.

It may seem strange to rate seat comfort so highly, but that's only if you have never driven in a Volvo. Amazing, ergonomic, adjustable, but those could describe many seats. What my wife would say (and I've read others express as well) is if you have back problems, get your Dr. to prescribe you a Volvo! They are that good.

Of course safety would have to be on the list in pros for a Volvo. One could talk about the usual safety options and gadgets more and more common in all cars, but what makes Volvo different is the design that goes beyond government tests. Volvo engineers its vehicles for safety based on crash data they accumulate from their mobile crash teams. Volvo, like Saab (RIP), pioneer safety systems for its own sake, not in response to government tests or mandated standards. Think about that when you search for your next ride for your family. We've named our baby "Tank" for a reason.

The XC70 is a wagon as practical and capable as any vehicle. If it isn't the sexiest vehicle or penned by a famous designer, its form is suited to its function. Windows are large, providing excellent visibility and the wagon is capacious. The XC70 is classified as a crossover, but I would argue it is a true (Sport) Utility Vehicle -- numerous accessories and mods are available to inject some "Sport" in it as well.

Based on specs from most current vehicles, the 208 hp and 236 lb/torque doesn't sound like much, but the torque comes on early and the vehicle doesn't lack for power when merging on the highway or passing, as the need arises. Fuel economy isn't spectacular, but neither is it anywhere near as poor as heavier vehicles, like true SUV's. As always, one's driving habits impact on that more than most other variables.

We happened to purchase a model that was nearly fully loaded, which included built-in DVD monitors in the back of the front headrests. The kids love it and it is by far the BEST DVD setup available as there are no monitors blocking the driver's view. The vehicle also has HID headlights which, though an intense white light, are a bit shallow on dark roads in the country. Overall, the layout of the interior mimics the exterior style -- a practical and clean Scandinavian design. There is space between buttons and many options, but nothing too overwhelming or festooned with techno options. My wife and I favour this setup as opposed to the explosion of buttons most luxury cars sport.

The XC70 is a study in compromise. The ground clearance is excellent for mild off-roading or tackling harsh winter blizzards, however, the ride isn't sporty by any stretch of the imagination. We have the 4C setup and it does little to quell the body roll. The XC70 is a raised, brawnier version of the V70, which means trade offs like a higher centre of gravity and loss of nimbleness. We owned a 1999 V70r before and the difference is night and day. However, as I mentioned before, upgrade options are available in various online dealers and the ride can be tightened up quite a bit, should one require it.

Though not a big issue, the rear seats could be a bit wider for better 3-abreast seating (though most vehicles share this limitation). The greater need, however, is another few inches of legroom. It is adequate, but only that. Another 3 or 4 inches would make the rear seat amazing, but then again, that would come at the cost of rear cargo capacity ... no such thing as a "free lunch".

When choosing your perfect vehicle, you have a list of items you want. The challenge is to find something that excels in each area, while not missing another. rnrnThe BMW 5 wagon was sexier & sportier, but less practical, by far. The Audi allroad is close, but older and less reliable.

More About the V70 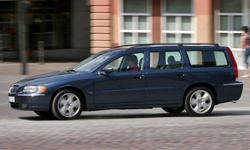 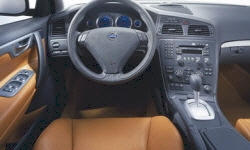