2010 Acura MDX Pros and Cons at TrueDelta: An MDX is what I was looking for, and I found a good one. by litespd

I recently purchased a 2010 MDX with Tech and Entertainment packages. I bought my wife a brand new 2011 Acura TSX, and we absolutely love the car, so when it came time to get a different vehicle for me, either an MDX or an RDX were at the top of my list.

I've had my 2010 MDX for about two weeks, and so far, I absolutely love it! Having one Acura in the family already, it was a no-brainer when it came time to find a different vehicle for me...it was either an RDX or an MDX. I was leaning toward an RDX, but wasn't completely happy with the interior size of it. Then, I found this MDX, at a price I could afford, and jumped on it, and I'm glad I did. It's 6 years old, with 95,000 miles on it, and if you didn't know any better, you'd swear it was brand new. It's quiet...no squeaks or rattles, no wind noise, and hardly any road noise. It's very comfortable, and roomy inside. Part of the reason I bought this car was the Entertainment package...I have identical twin granddaughters who are 3, and we can put them in their car seats in the back seat, and they can watch a movie while we are traveling with them. So far, I have been bringing the car up to my standards...while it was a one owner car that was serviced regularly, there were a few things that hadn't been done that I have been working on. I just had the transmission flushed and refilled and an oil change done, as well as replacing the cabin and engine air filters. It had one bad rear shock when I bought it, which brings up my only complaint so far...I had the right side shock, which was bad, off and replaced with a new shock in a matter of minutes. But when I went to change out the left side shock, I could not get the lower mounting bolt to budge...apparently, the bolt has rusted to the inside of the metal collar at the bottom of the shock. When I took the car into the local Acura dealer to have it serviced, I asked them if they could break the bolt free, then snug it up so I could change the shock when I got home. Initially, the service manager said he'd have them do it, and there would be no charge...but later, he came back and told me that the techs told him that they would have to heat the bolt to get it out, and that the bolt would probably not thread back into the threaded collar after it was heated. He suggested that I bring in the shock, and have them mount it, to the tune of $200! I told him I'd take care of it myself, and went to the parts department and ordered a new bolt, and will have a local, independant repair shop change it out for me. Apparently, this is a common Acura/Honda problem, as I had the same thing happen when changing the rear shocks on my daughter's 2008 Honda Civic. Other than that, I haven't had it long enough to really make a judgement on the reliability...but the previous owner told me that they never had any problems with the car, and that it started right up for them every day...and North Dakota is known for their extremely cold winters.

More About the MDX 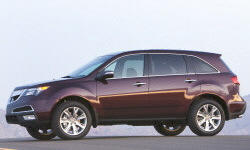 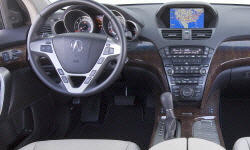