Bought this car because the fuel economy was the same as the Hybrid SUV I was looking to replace. Best miliage is on the highway with AC off at 27 MPG. It gets 23-24 in the city with AC off.

Acceleration is adiquate with the 300 HP rating it has. Only negitive is it requires Premium fuel!

Acura provides very nice Michelin tires. Much better than the normal OEM tires I have received with other cars.

This thing has a very tight turning radius! Amazing.

Ride is very smooth. I have to travel over cobble stone streets and the ride is wonderful on them. However, some bumps and pot holes provide a much more bone jarring experience than I have experienced with other luxury cars.

The Nav is worthless. Garmin is a thousand time better than this Nav. Voice recongition is worthless for anything. Do not subscribe to AcuraLink Connect as the it has unreliable voice recognition also for the most part, but better than the stock NAV.

Very difficult to get the color wanted. Most available stock in my area was black or white only. If you want any other color, they are impossible to find.

The 6 speed tranmission on the Acura is not at all smoth during deceleration. It will automatically down shift when you are coming to a stop and it will raise the engine rpms and great deal lurch you forward. It feels like you have a manual tramission and the car is downshifting to come to a stop without any brakes. Definately not a lurxry car feature!

The 2014 MDX does not come with Power Folding Mirrors in the US! They are available in Canada, but Honda refuses to sell this option in the US! Beware if you have to part this car in a tight garage! I almost did not purchase this car for this reason.

Please note, that for a $50K "luxury" SUV, if you buy the FWD model, you will have to spend about $600 for a spare tire. Both models have room for a spare under the rear. The AWD model does come with a compact spare, but not the FWD model. And buy the way, there is a nationwide backorder on the Goodyear compact spare itself ($350) until March of 2014. You will also need the $200+ spare "kit" for the FWD model, which includes the wheel, jack mounting hardware, etc. Why did Honda be so cheap on such an expensive SUV?

I bought the Advanced package because I wanted modern technology. Be aware that the Lane Assist can cause the car to wonder a bit in the lane and it might appear to LEO you are a bit intoxicated. I am waiting to get pulled over for this. The adaptive cruise control can apply the brakes just to keep the car from going 1 or 2 MPH abouve the set speed limit especially going downhill. Rather annoying as one would expect it to just coast.

Before you purchase this car make sure you understand that it has a "Nanny NAV", and most if not all controls are locked out while the car is in motion so even your co-pilot in the passenger seat cannot use it. VERY fustrating - especially since the voice recognition is TOTALLY WORTHLESS!

Did I mention the voice recognition from 20 years ago is better than what Honda put in their flagship line? VOICE RECOGNITION IS WORHTLESS!

With the Advanced model, you are really depending on Honda as a software developer. They do not have any mechanism to tell the consumer that new software is available, what the update contains or fixes, and you have to take it to the Dealer to have it installed. They should be able to do "over the air" software updates using Acura-Link Connect, but they don't! There seems to be a few software bugs, but since they don't effect safety, Honda has no incentive to get them to the field.

Agree! I agree that the Nav System is bad and that the voice technology is absolutely worthless. It simply cannot recognize even the most eloquently dictated requests for directions. The responses to your requests are so off the wall that you must look at the screen to see what choices they are asking you to select; the exact iopposite of what a safe voice system shoul yield. By locking out the nav controls and having no alternative even when you have a passenger who could manually operate the controls, Acura has created a safety hazard rather than a safety device. It is totally distracting and useless when you find yourself in an unfamiliar or unsafe area and they tell you you must pull over to operate the system. Truly worthless!

More About the MDX 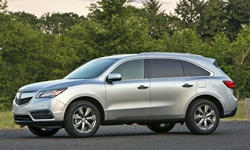 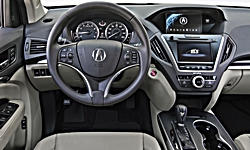