2005 Chevrolet Malibu Pros and Cons at TrueDelta: Starts and runs but has niggling problems by Geoffb

I bought this car used with 7,000 miles on the clock. Needed to replace a Plymouth minivan to carry the family of four. Wanted the room and reasonable gas mileage. The MAXX had an appealing combination of features like the adjustable rear seat, rear seat moonroof, rear seat entertainment. V6 power more than adequate, comfortable. In theory it was a good match.
I traded it last year with a sigh of relief. Except for the one time it's security system went to DEFCON 5 and wouldn't start WITH THE KEY it never left me stranded. BUT - it ate brake rotors with astounding efficiency. The steering lost assist on cold mornings. The CD player stopped ejecting CDs. Various knobs and buttons lost their lettering or self destructed. The heat seater would magically turn on by itself a great feature in summertime! The lever to fold the rear seats stripped out.
Am I being too picky? It was 'reliable-ish'. But the nuisance factor was very high. For a similar amount of money I bought a four year old Subaru Forester. It uses more oil than I would like but in 25,000 miles nothing broke or didn't work as intended. it doesn't have a bunch of mismatched buttons spread out on the dash and doors. Everything you need is right where it belongs and it works. I wanted to buy American but after four 'American' cars that proved to have poor long term reliability or quality problems I would hesitate to buy one of the Big 3 again. Maybe they need to put the engineers in charge instead of the bean counters?

Airbags and ABS included. Rotors warped every 6000 miles like clockwork. power steering assist would cut out in cold weather.

It was not an expensive car to purchase. But the huge depreciation from new price to what I paid used should have clued me in to this car's value.

If you maintain 65mph on the highway this car will do an honest 30mpg. Amazing.

Outstanding - seat is adjustable fore and aft, had recline feature, each side folds flat to increase storage space. Glass panels in the roof add to the feeling of spaciousness.

Powerful. Pulls strongly to 5,000 rpm when required. No problem merging on the highway even when loaded for a week's vacation. Transmission shifts smoothly.

Not exactly a handsome vehicle.

Electric steering is beyond numb. In cold weather the steering wheel sticks at low speeds when starting out. Clunk comes and goes in steering column. Not a great design.

lock/unlock buttons no longer work. Mirror adjustment control broken off. Radio knobs faded so badly as to be unreadable. Finish on steering wheel buttons wearing off.

Driving position is not bad, but rear visibility is poor.

Weird things have failed. It never fails to start, and it has not required any major repairs. But small things keep breaking - rear wiper is kaput, disc brake rotors warp within 5,000 miles of replacement (I own many cars.....this problem is unique to the Malibu). Several electrical issues that I have not addressed due to cost.

More About the Malibu 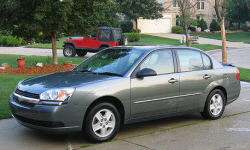 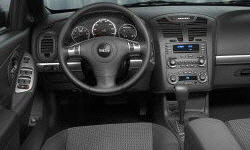