We've had the F150 for 48,000 miles now. It's been reliable, comfortable, and can get decent gas mileage for a truck of this size.

When bought the truck, I was actually in the market for a SUV to replace the Honda Pilot we had just sold. We were looking at the Suburban or Yukon XL. Since it was April 2011 and this was a leftover 2010, there was $12k in discounts.

So far, with a light foot and the majority of the miles are on the freeway, my fuel economy is over 19 mpg. Not bad for a big super cab truck with a V8, camper shell, and carpet kit. On long trips I have hit 21.5 mpg. Mostly it's around 17 driving fast, lead foot, and city mileage.

So far I have about 48,000 miles on it and have not needed any repairs.

Lots of room in the rear of the cab for the kids. The rear seat easily folds up and out of the way for cargo. Lots of cup holders back there.

While the 2010 5.4L V8 is not as powerful as some of it's competition, I was glad Ford did not resort to using multiple displacement schemes like the competition in order to get better fuel economy. It has been problematic in other makes.

The head rests of the rear seats really block your vision out of the rear window. It's not as bad in the Chevy/GMC trucks.

With the end of year discounts this was the best deal going. And at the time, the Chevy/GMC AFM (Multi-displacement scheme) was still having teething problems so I opted for the F150. So far nothing has happened to make me regret that choice. It was a good value for the money. However, if I had to pay full price, $37k vs $26k, I may have gone a different route. 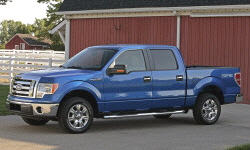 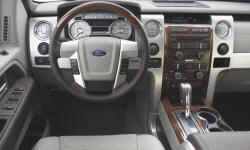