2013 Ford Fusion Pros and Cons at TrueDelta: I've Never Had A Car Fail So Spectacularly. by davidjenkins

I talked my wife into getting out of imports and getting this car from Ford. We bought it brand new in the first year of production, 2013, which was a mistake. Ford obviously hadn't gotten all of the bugs worked out yet, and unlike the import brands, was satisfied to let it's customers pay to be beta testers for their new design.

The exterior styling is great. Looks like an Aston from the front. Proportions are good, especially for a front drive car. Rides well, drives well, smooth, and the Ecoboost 1.6 had ample, if not impressive, power. It was also very well equipped for the price. That's the good. The bad? 1) The wiper motor failed during a snowstorm. Had to be replaced under warranty. 2) Airbag sensor failed. Had to be replaced via recall. 3) Steering box bolts bad, had to be replaced via recall. 4) Overheating problem. Happened just outside the bumper-to-bumper warranty period. Amazingly enough, the "engine" is not considered part of the powertrain, so the powertrain warranty didn't cover it either. $230 coolant bypass sensor replaced at my cost. Ford went halvsies on the repair, but the car still overheated once after that. 5) Left rear shock absorber went bad. Replaced at my own cost, $100. 6) Right rear shock absorber went bad. Replaced at my own cost, $100. 7) Infuriating, impossible to find rattle coming from rear-end. Dealership tried to fix and was unsuccessful, but charged us anyway. Then, dealership tried to blame it on a rear impact, but no paint was damaged and no dents to the outside of the car. Rattle was never isolated before we traded it. And that's all before 63,000 miles. Contrast that with my Nissan Xterra, which is now at almost 8 years and 92,000 miles. It had some coolant evaporate, which I fixed by topping off the overflow tank. Oh, and the TPMS sensors are going bad, which will happen in all cars eventually, because they work by battery power, and the batteries are not replaceable.

We decided to take a chance after many years of buying imports. And, well, we feel Ford kinda blew it with this one. My wife likes to keep her cars until they are very high on mileage, but the Ford is gone after four years and a mere 63,000 miles. It just became so frustrating to drive...the rattles, the wallowy suspension (I suspect the shocks were going bad again, which suggests that the rear springs must have been very soft from the factory), the feel that you might have trouble every time you take the car out. It was to the point where we felt more comfortable driving my old Xterra than our newer Fusion, and it should never have been that way. Ford, for their part, did feebly try to help, but it stings paying hundreds of dollars for a repair when you're also making a payment on the car. We were still on the hook to repair a car that simply wasn't right when it came out of the factory. Lesson learned. Wife recently traded in the Fusion and got another car. Yes, it's an import, straight from Japan. And I still have the Xterra (almost 8 years and 92K miles).

My inlaws have a 2014 or 2015 Fusion and really enjoy the car. They are on their second lease of an Escape.

I have a '15 Fusion SE Hybrid and just love it. Sorry your experience has been 180 degrees away from mine. 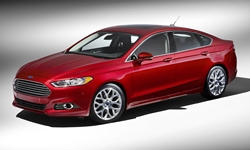 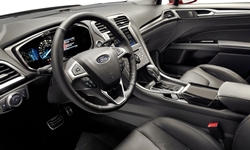