Terrific engine. Docile at low rpm, but comes up on the cam nicely around 4k. Great noise too. Lots of bad reports on 6spd manual trans, but I seem to have a good one. Refinement of drivetrain surprisingly good overall.

All kinds of grip. Easy to rotate the rear slightly on throttle, and not too much understeer at other times. Live rear axle only noticeable on the throttle in a bumpy corner, and even then it's reasonably well controlled.

Great shape. Could do without the chrome horse in the grill and fake gas cap on the rear is too big. Otherwise very clean, especially without a spoiler. 19in wheels on perf pkg look good, but gunmetal gray may be better than the black current wheels.

Surprisingly smooth and refined ride. Much better than a live rear axle, 19in wheeled car w/ a performance suspension has any right to be. Most pleasant surprise of the car.

Less than $25k out the door w/ all taxes & other BS ain't bad for a 300hp car that drives this well and this fast.

The styling inside overall is just fine. But I HATE the gauges. Too retro and not readable enough. Maybe would be better if it had an auxiliary digital speedo like the Camaro. Also, the cheap rubbery steering wheel is not very nice to handle.

I was hoping for a bit better than the 24 I'm getting in commuting duty. Car still has less than 2000 miles, so it may improve w/ summer blend gas and a more broken in engine. If I could get 26 I'd be much happier, but I'm not counting on it

I bought the standard V6, not the premium, so even though my stereo has a SIRIUS button, SIRIUS does not work and cannot be turned on. I'll have to install an auxiliary unit if I want satellite radio. That's a little ghetto in 2012.

My dad's 2010 Camaro has much more legroom than my Mustang. 2 more inches would help a lot, though I have to admit even at 6-3, I'm still pretty comfy in the Mustang. The room would be nice to have on trips.

I don't like how Ford forces one to step up to the premium to get SIRIUS, or a leather wrapped steering wheel. I'd prefer to see a more a la carte approach to options on the base version.

Are you still happy with the car? Thanks.

Yes, but not completely. I've dealt with a couple issues over the last few months. Firs tI had a brake pad come apart (not wear out, it actually came apart where the friction material pulled away from the backing plate). I've never even heard of that happening.That required new pads up front andhaving the rotors turned. Now I have a creaking or squeaking sound coming from the rear suspension. I'll have it looked at under warranty next week. It's probably a bushing going south. Some other issues since I first submitted the review 3 years ago include a new steering rack and rear anti-roll bar being replaced under warranty. That's probably more an indictment of the crappy Illinois road conditions than the car itself. Shortly before the basic warranty expired, I bought a Ford factory extended warranty that basically doubled the coverage period for about $900. I'm not sure I'd want to have this car without warranty coverage. Performance is decent. I still get a kick out of attacking the corners. I put an SCT tuner on it while I don't notice big power gains (I only use an 87 octane tune), it does seem to help mileage a bit. Another bonus: I took the governor off and put on an aftermarket driveshaft since the stock unit is a known weak point. I've done a track day at Putnam Park with the car and I've seen 150mph come up on the speedo on a deserted backroad. Not bad for a V6. The gearbox is still working as good as new, but the recent cold weather reminded me it shifts very stiffly and isn't happy until it's been driven a couple miles and gets warmed up. I had a Focus that did the same thing, so I wonder if it's more of an issue with Ford's manual transmission lube than the gearbox itself. On the plus side, the engine is still 100%. No oil burning. Runs great. The paint looks good and the interior is wearing well. Would I buy it again? Probably not. Am I in a hurry to unload it? No. I'll probably keep the car at least another 2 years. I still have fun driving it and it hasn't left me stranded. That's good enough for me to keep it around a while longer.

Thanks very much for your response. I am thinking about getting a 2015 v6.

I think a '15 would be a nice choice. I haven't driven one, but I have sat in one and can tell the interior is much nicer and there's more legroom in the new car. The only drawback is the '15's backseat may be even smaller than the old car. When it's time for this car to go, I'll definitely check out a new Mustang, but probably the 2.3 Ecoboost in my case.

More About the Mustang 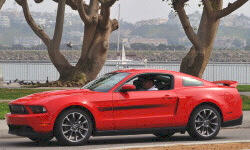 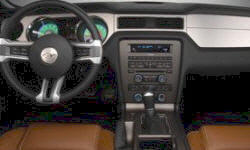