I have owned Mustang GT's, I traded a Mustang 6cyl, for the SI, taking it over buying another GT. It is far more livable, just as much fun. Satisfying is the word to use. I thought I would regret not having the street cred, awesome power and orchestra of the GT, but I don't. The GT sucks gas, with my driving style (hoonish) I was getting 13mpg in the GT and 23 in the 6Cyl. Plus with both cars I felt that a long journey I had just had a work out, it drains you. With the SI I arrive at work refreshed and have a lot fun on the way. Plus the trade in value on the SI is amazing.

I sold a late model Mustang (6 cyl) Convertible and instead of buying a GT as I intended to I purchased the Civic SI. Despite knowing that the 2015 Mustang was just around the corner. So I have tough criteria to meet. The SI has more than adequate power for my needs. I put around 20-25,000 miles on a car each year and most of this is freeway. The power lets me merge with confidence, pass with ease and get out of tough situations easily. It also has a fun factor to it. It is NOT a street racer, a GT Mustang will beat you off a a stop light every time, and spank you on the way. However if your at 50mph plus and you see a WRX or GT trying to pass you, stomp on the pedal, drop a gear, watch the VTEC light up and they will not catch you. Been there tried it. Kind of satisfying, you can see the other driver looking close at your car, what the hell is that? Having usable torque at all levels is great. Also the gear spacing means that you will be changing gears a lot, it is a drivers car, not a cruiser. Now if you want all torque get the Focus ST/Mazda Speed3/new GTI. But after a year of these you will get tired of twitchy freeway driving and constantly battling torque steer. I would mention that you do not see many opportunities to stop light these, none so far, but know it would be close, with the Focus having the edge with the right driver. I say right driver, because I am a trained professional driver (ex London Traffic Police) and the slick gearbox and perfect clutch means you are more likely to nail that shift before the other driver does, so that although on paper the Focus may beat you, they are handicapped by an inferior clutch/gearbox/torque steer.

This one is odd. I travel down to Florida a lot, on a 300-400 mile trip I am between 35-40. Mixed driving I have never gone below 32.4. City driving I once saw it go down to 29.1. I am sure if I drive it like I stole it these figures would drop, but then few drive like this. I will say if you if you light up the four lights on the VTEC you will knock a couple of miles a gallon off your mileage instantly and it will take a while to get back.

A joy to handle, a canyon carver. Now if I lived in the mountains I would probably choose a Mazda MX5, but I don't, I live in the flat area of South Carolina, and roads here are straight as a die.

As I take long trips, I am slightly over 6ft tall, I can tell you, the seats are comfortable. My back does not tire, there are no aches and pains. Coming from a Mustang which does not have a telescoping steering wheel, I appreciate this feature. Great visibility, no real blind spots worth the mention, much better feel of your surroundings than the ST or GTI.

Not quiet! Better than the 2012, but you hear the road, the engine. It is not obtrusive at all, the road is more in the background, but rev the engine and it will give you that Honda Engine sound. On the old SI's when you hit the VTEC you could really hear it kick in. With the 9th Gen it is much more subtle. Now if you want muscle car rumble, do not look hear. This is a Formula One sound, not a NASCAR sound. After having both a Mustang GT in the past and VTEC 6cyl Accord 6MT I have no personal preference.

The SI is in a peculiar spot. If you want a hot hatch go for the ST, if you want power go for the Mustang GT or WRX. However if you want livibility, fuel economy, reliability (those turbo 4's will go on you after the 100k) and you also want a drivers car, then this is for you. I have had this car for almost three months, I have seen precisely one on the road (yesterday as it happens). Unlike the Mustang which I see many of.

I'm scheduled to review a 2014 Civic Si in a few weeks, down in the mountains of North Carolina, and am really looking forward to it. As you note, these are quite fun to drive.

More About the Civic 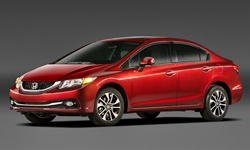 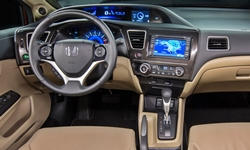