2011 Hyundai Sonata Pros and Cons at TrueDelta: Terrific value, not the Hyundai of the past. by sporky

While looks are always subjective, there is none better in this regard for the price. When ithe Sonata was still relatively unknown vehicle, people would think it was a Lexus or a Mercedes. Paint finish and build quality is superb. Has to have the 18" wheels to look its best though. Have had more positive comments on the looks that almost any car I've ever driven.

Average 24 mpg in town and typically get 38 mpg on trips. All in a large family sedan. Uses regular gas.

Have taken several long trips with family of five and luggage. Huge trunk without shrinking rear seat leg room. Replaced a large SUV and rarely miss it. Certainly don't miss half the MPG that got compared to the Sonata!

Huge number of features often options on other brands. Long warranty. Real world prices are best value out there.

Bluetooth, traction control, side airbags, stability control, satellite radio, all standard. Other makers gouge on a lot of these features. Like the way Hyundai makes things simple by offering just a few option pacakages. Makes finding a car to buy easy and you don't end up paying a lot of things you don't want.

Interior is nice but not great. Scratches way too easily. Interior not up to the exterior build quality. But probably comparable to others at the same price.

Hyundai still has a way to go in regards to understanding handling and steering feedback. The car handles very flat and responsively. But the steering is a little numb. Its no BMW but then it costs half as much. Still not a hard car to drive fast in, just that it doesn't feel as natural as it could.

Stock tires are a bit noisy.

People seem to be living in the past in regards to this. Hyundai is probably more reliable than the average brand but people who have never owned one only want to remember the days when they were considered a joke. Most problems I have heard of are only minor in nature. The pulling issue is the only legit one I've read about often and they seem to have fixed that. I've had no issues other than a dead battery which is irritating but not really Hyundai's fault. Really impressive considering this was a completely new design in its first model year. Great warranty makes this a non issue in my opinion.

Side mirrors still leave blind spots. Could be a little larger.

My Sonata is a beautiful black on black four door. But, there are design flaws. This is my second one.My 2010 was a better car. When I would put the car in park, drive or whatever greer, the car would make a hard jump every time. Both cars did that. Now the 2011 is having problems with the suspension and eating up new tires on the inside of the tire. I drive the same way and places as I did in the 2010 (I don't go anywhere but work and church)but the wheels are not holding up. They are warping without hitting anything, curbs included. I've already had one wheel repaired. I took it back to where I bought my tires and they told me for whatever reason, there's a weakness in the design.
Dealer says it's the tires.

Sorry to hear you are having problems. We are still relatively problem free at over 3 years. Went to new Michelin tires and the car is a little quieter and rides smoother. My wife HAS hit curbs with her car, hard enough to ruin three tires, but the wheels have held up well, with no wear issues. Sounds like there is a worn suspension part or alignment issue causing your wear issue. Maybe give another dealer a shot at diagnosing the problem? 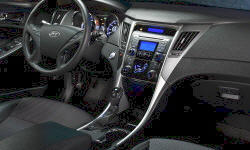