I drove this car from California to Georgia, up to Washington DC, then around the Great Lakes to Minnesota, then back to California.

I did a lot of start and stop driving this summer at a camp, constantly reving up the engine to slowly drive over terrible speed bumps in the road.  When I left Georgia, my average MPG was 31.3.  When I arrived back in CA, after going 63 MPH (give or take 2) the whole way, my average MPG was up to 32.7.

Even with the front seats slid all the way back, this car still has more room than almost any other car -- almost as much room as a BMW 780IL.

This car is light enough that it stops on a dime.  Seriously, I can be driving along at a really fast pace and if I need to slam on the brakes, it just "whoomp" stops.

I bought the version with manual windows.  If I want to go to the store and the other people in the car want to wait, I don't need to leave them the keys to let them roll down the window.

The two back seats don't fold down, so I can't carry anything longer than about 8 feet or so.

When I bought the car, I laid the seat down all the way to make sure it would be comfortable enough to nap on.  It is, but it's slightly more comfortable if the car is parked on an incline because the seat doesn't quite go down completely flat... although come to think of it I haven't tried raising the seat height with the lever then setting the seat back.  Anyway, the passenger side doesn't have a seat height adjustment lever and it doesn't quite make a 180% flat angle either.

Nissan will send you all sorts of emails to bring your car in for its scheduled maintenance.

I love this car. Â Manual transmission, so instant responsiveness to exactly how I want to drive, whether that's normal or under/overshifted to get more oomph or better gas mileage. Â The trunk is roomy enough, although I wish there was a latch to put the back two seats down. Â The back two speakers aren't hooked up for some reason. Â I drove this car from California to Georgia in 2.5 days (pulling off the freeway, rolling over into the passenger seat and sleeping until I wasn't tired, then driving until I was tired, rinse and repeat). Â I drove it all around Georgia over the summer, then took it up to DC, over to Minnesota, then back to CA with a pitstop in the middle of Iowa.

Oh, I had it all last winter in the snow too and it drove just fine.

More About the Versa 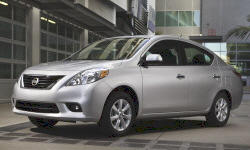