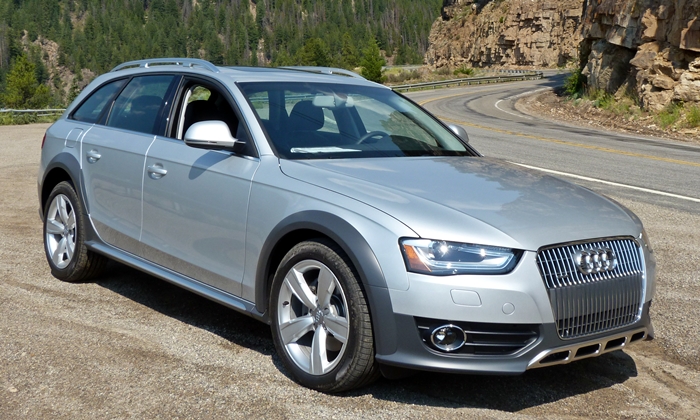 Fans of wagons have fewer and fewer to choose from, as the great majority of buyers prefer crossovers. For 2013, Audi has raised the A4 Avant an inch and a half, added some cladding, and relabeled it the "allroad." Might people who would have otherwise bought a crossover be won over? Will those who prefer wagons still want this one? 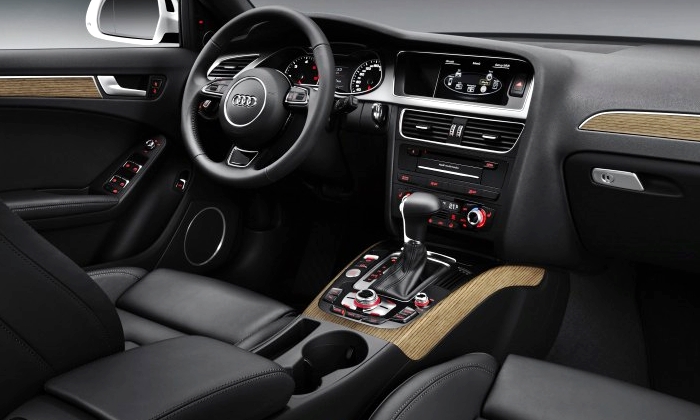 Unlike with the original allroad, offered from 2001 through 2005 in the U.S. and based on the midsized A6, the new allroad's interior is virtually identical to the A4's. So it's not special, but it's still a very nice place to be. Nothing showy (unless you count the optional layered wood trim, shown in the photo), but thoroughly tasteful and composed of quality materials.

I had feared that the 1.5-inch suspension lift would seriously degrade the allroad's handling. A drive through Colorado disproved these fears. The new allroad steers and handles much like the A4. It's too heavy and mature to qualify as tossable, but it managed mountain roads with a solid structure, no slop, less roll than in the related Q5 crossover, and good balance. The quattro all-wheel-drive system’s default rearward bias contributes to the last. Ride quality is also very good, despite the omission of the expensive and troublesome air suspension standard on the original allroad. As in all of Audi’s compact cars for 2013, the new allroad's steering gets its assist from an electric motor rather than a hydraulic pump. The new system feels similar to the old one, with moderate heft and good weighting but minimal feedback. Add it all up, and while the allroad isn't terribly exciting to drive, it is quietly satisfying and, on curvy roads, confidence-inspiring. 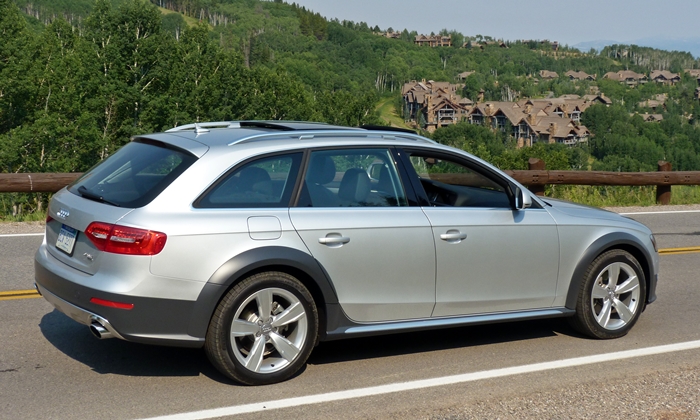 Less boxy rear end than with a Volvo contributes to middling cargo volume. 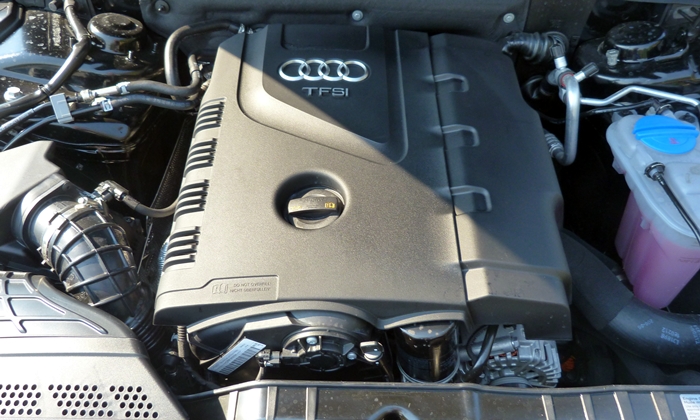 The turbo four's 211 horsepower isn't much by current standards, but a strong midrange compe

Tasteful styling isn't limited to the interior of the car. To distinguish it from the A4, the allroad gets a unique chrome grille and fascia-mounted stainless steel skid plates. Audi claims that that latter provide “the right kind of armor to help battle even the toughest backcountry roads.” But their primary purpose is cosmetic. Don't care for the SUV-inspired dark gray cladding? Audi will paint it body color for another $1,000. By providing this option, Audi hopes to appeal to both camps, crossover and wagon. (Personally, I'd prefer body color, but would find it hard to spend the $1,000.)

The original allroad was powered by a 250-horsepower turbocharged V6 shared with the enthusiast-oriented S4. The new allroad, in contrast, makes do with the same 211-horsepower turbocharged four-cylinder engine as the A4. Though this engine won't throw you back in your seat, it only feels a little winded when passing uphill at high altitude. In typical driving it should prove more than sufficient. Boost lag is not an issue. The EPA ratings aren't quite as good as those of last year's A4 Avant, 20 city, 27 highway vs. 21/29. But these numbers are still good for a nearly two-ton all-wheel-drive car. Much of the credit for both performance and fuel economy is due the only available transmission, a manually-shiftable eight-speed automatic. Two engines are offered in the competing Volvo XC70. The base 240-horsepower inline six is merely adequate, but the available 300-horsepower turbocharged engine feels much stronger and adds only $200 to the price of a well-equipped car.

Audi's compact cars get the firm's latest infotainment system for 2013. The new system includes satellite images from Google, so on the nav screen you actually see where you are, and Internet connectivity. A Bang & Olufsen audio system is an $850 option.

Audi suggests that, despite the platform downgrade, the new allroad is pretty close in size to the old one because its cars have been growing with each redesign. Yet while the original allroad felt like a midsize car inside, the new one feels like a compact, especially in the back seat, where both shoulder room and legroom are down by a couple of inches. The average adult will fit, but without much room to spare. This said, the "midsize" Volvo XC70 provides a couple inches more shoulder room but no more leg room.

Compared to the original allroad, cargo volume with the second row folded suffers the most dramatic cut, from 73.2 cubic feet to 50.5. Not bad for a compact wagon, but well short of the 72.0 cubic feet offered by the Volvo XC70. 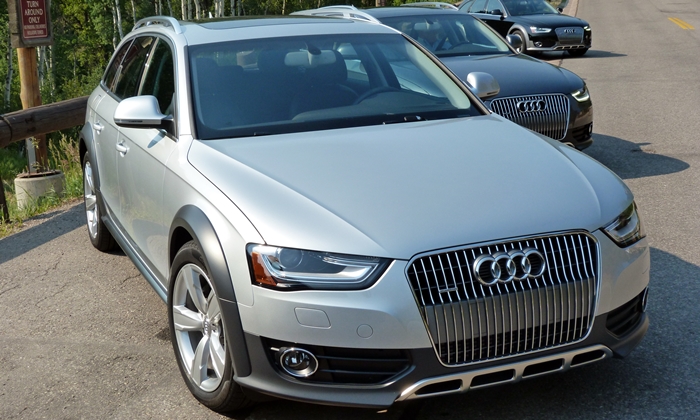 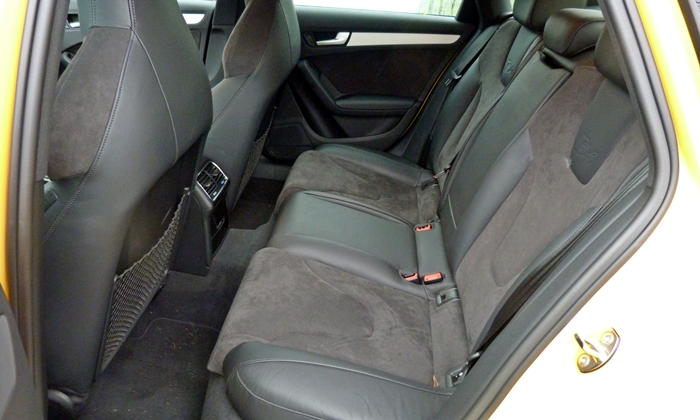 No photos of the allroad's rear seat. One for the related S4 sedan.

The days when an Audi cost significantly less than a BMW or Mercedes have been relegated to history. The 2012 A4 Avant started at $37,275. The 2013 allroad starts at $40,495. Adjusting for additional standard equipment leaves a difference of just under $2,000. (In case you were still wondering why Audi has abandoned conventional wagons for the allroad, this is why--you can charge more for a quasi-crossover.) Tick off all the boxes, and the MSRP climbs to $56,695. The larger, more powerful Volvo XC70 T6 lists for $2,500 to $3,000 less, the higher amount when both cars are loaded up.

The new allroad won't inspire a cult following like the original did. It's too similar to the related A4 for that. But while not a special car, it is a good one. Not thrilling, but thoroughly satisfying. The Volvo XC70 T6 is quicker and can carry more, but handles more clumsily and is less fuel efficient. Crossovers also provide more room, but their additional height colors their handling. I doubt the allroad will win many buyers from crossovers. But fans of compact wagons will like it. 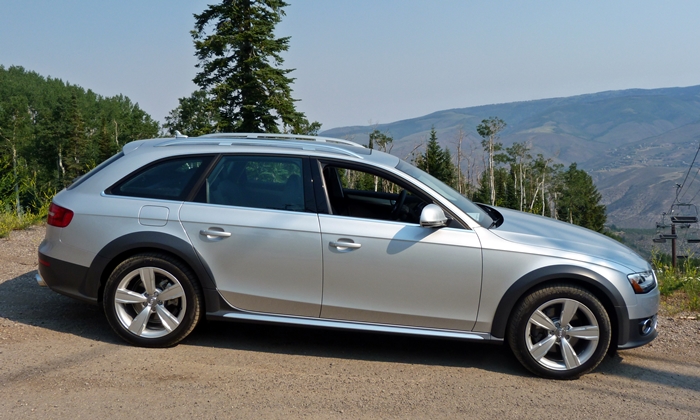 Don't care for the gray cladding? Audi will paint it body color for $1,000. 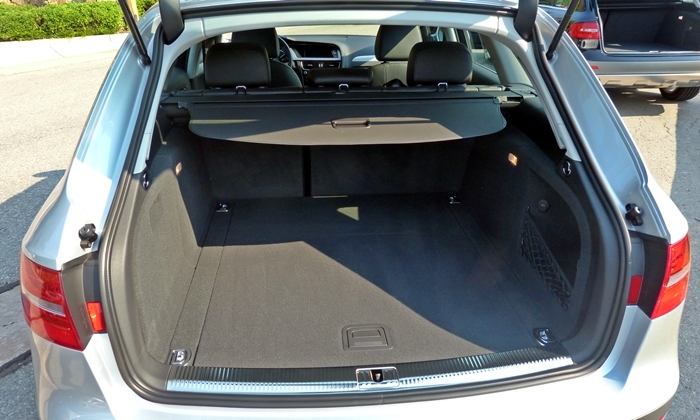 Considerably less cargo space than in a Volvo XC70, but plenty for most needs.

Preview drive. Audi provided insured and fueled cars, airfare, deluxe accommodations and food, and an iPad containing the press kit (given away in a contest).

More About the allroad 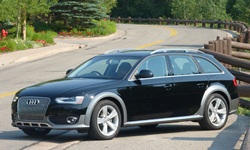 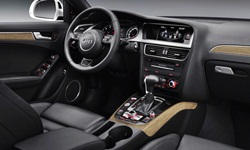