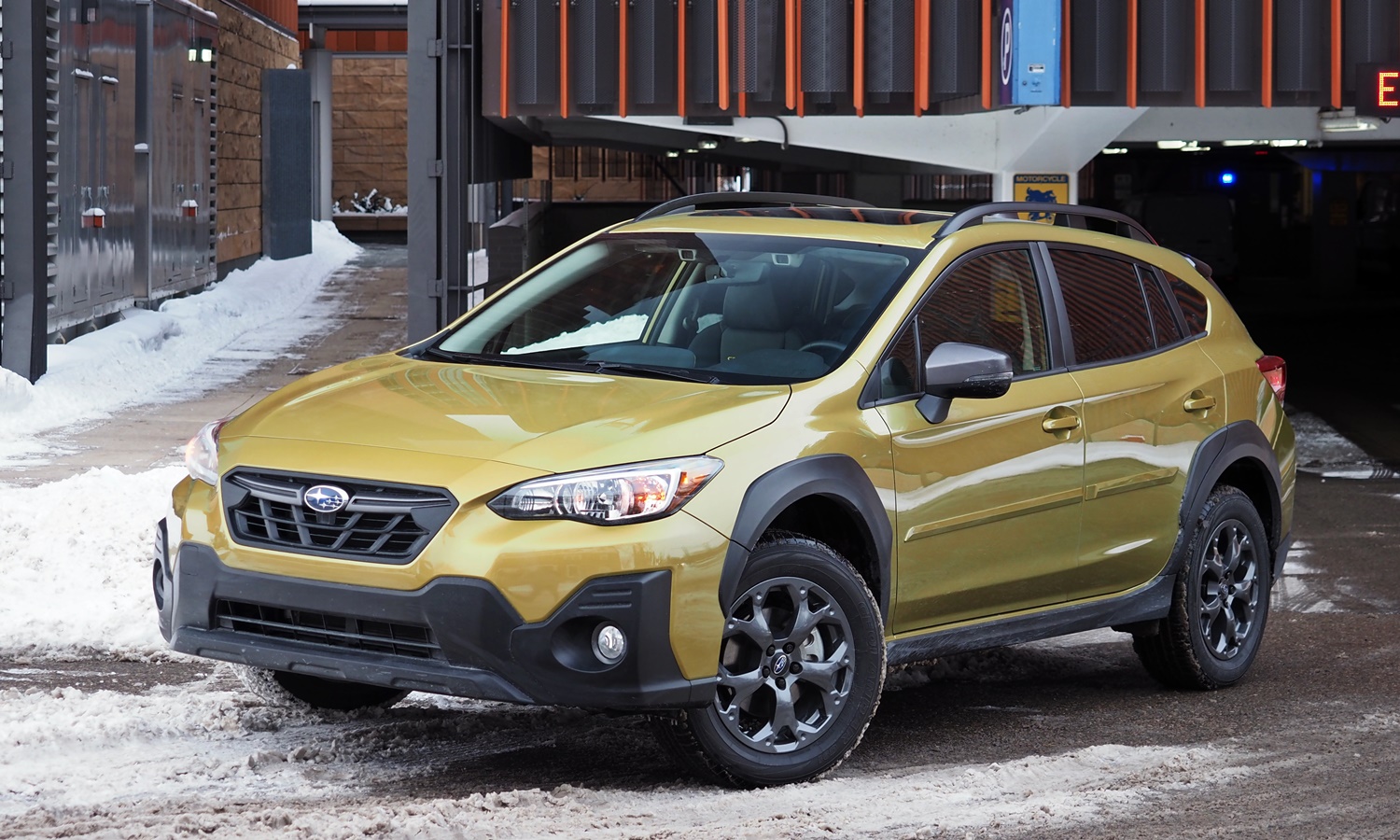 In the mid-1990s, Subaru introduced lifted versions of its cars because it hadn't yet developed SUVs. But even after the introduction of the Forester and (more recently) the Ascent, the Legacy-based Outback and Impreza-based Outback Sport continued to sell well, so Subaru has continued to develop them. With a 2013 redesign the Outback Sport became the XV Crosstrek, which with a 2016 refresh became simply the Crosstrek. A 2018 redesign included an upgraded interior. Most recently, a 2021 refresh included the Outback's larger, 2.5-liter engine in the Limited and a new Sport trim. Through it all, the primary question remains the same: why buy a lifted hatchback rather than a straight-up crossover? Among the current small crossovers, the Kia Seltos might be the best. How does the Subaru Crosstrek Sport compare?

So, what do you see, a hatchback on stilts or a crossover? more Crosstrek photos 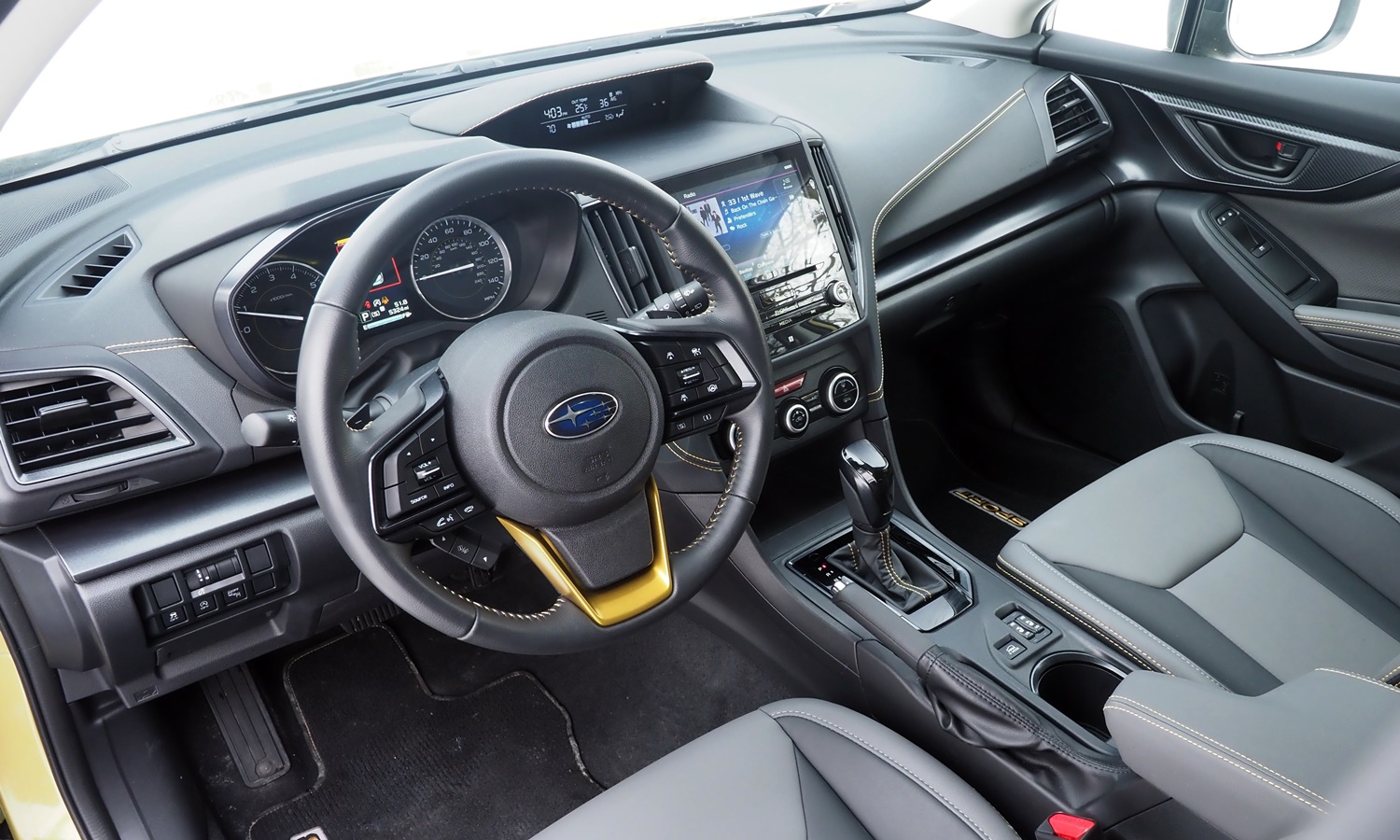 My initial impression of the Subaru Crosstrek wasn't great. It wasn't bad, either. Just "meh."

The thing was, I'd just spent a week in a $75,000 395-horsepower Land Rover Defender. To regain some perspective, I had to recall that the Crosstrek competes with the smallest, least expensive crossovers--the other end of the market from the Defender.

The least expensive Subaru Crosstrek lists for $23,295, about $3,000 more than the Impreza hatchback on which it is based. Replacing the standard six-speed manual with a CVT also adds Subaru's full suite of collision avoidance tech and adaptive cruise control with lane centering, and bumps the price to $24,645.

Where else can you get a vehicle with all-wheel-drive (standard on all Subarus except the BRZ sports car) and adaptive cruise for less than $25,000? Nowhere I'm aware of. The next lowest might be the $27,540 Honda HR-V EX AWD. Well, unless you include other Subarus. Then the Legacy sedan undercuts the Crosstrek by $825. But if you're reading this review you're probably not willing to consider a sedan. Moving just a bit in the other direction, the considerably roomier Subaru Forester is $1,200 more than a base Crosstrek with CVT, so it also undercuts the Honda. Kudos to Subaru offering these driver assistance technologies even on its base trims. To get adaptive cruise on a Kia Seltos, you must get the top-of-the-line SX.

Pricing for the more powerful and more heavily equipped Subaru Crosstrek Sport starts at $27,545. An option package with moonroof and blind spot warning adds $1,600, for a total of $29,145. The accessory spoiler on the tested Crosstrek lists for $397. Does it adds enough to the look to be worth this much?

At over $29,000, the tested Crosstrek Sport might no longer seem like a bargain, but it is priced competitively. The Kia Seltos SX lists for $29,140. Adding $700 for a sunroof brings the total to $29840. But the Seltos has some additional features, most notably nav, a premium audio system, and a longer basic warranty (five years vs. three), and it is significantly quicker, so some people might find it a better value. Overall, the pricing of the two models when comparably equipped and adjusted for remaining feature differences is close enough that neither has a clear advantage in this area. But both have an advantage over other competitors. The Chevrolet TrailBlazer and Mazda CX-30 cost much more.

The Subaru Crosstrek is also relatively inexpensive to operate. Compared to other small crossovers with all-wheel-drive, the Subaru Crosstrek Sport scores among the highest on the EPA's tests: 27 mpg city and 34 mpg highway. With its turbocharged engine, the Seltos SX checks in quite a bit lower: 25 city, 30 highway. Even a Seltos with Kia's 2.0-liter non-turbo engine can only match the Crosstrek Sport with a 2.5-liter engine in the city test; in the highway test it manages only 31 mpg. A Honda HR-V with AWD ties that Seltos: 27/31.

Crosstreks with Subaur's 2.0-liter engine score one mpg better in the city test but one mpg worse in the highway test. So the larger engine in the Sport and Limited entail little if any fuel economy penalty.

During my winter driving the trip computer reported 28.5 mpg in town and 31.5 mph on the highway.

For better city fuel economy, a Crosstrek Hybrid with EPA ratings of 36/34 and about 17 miles of electric-only range is offered in ten zero-emission vehicle mandate states. 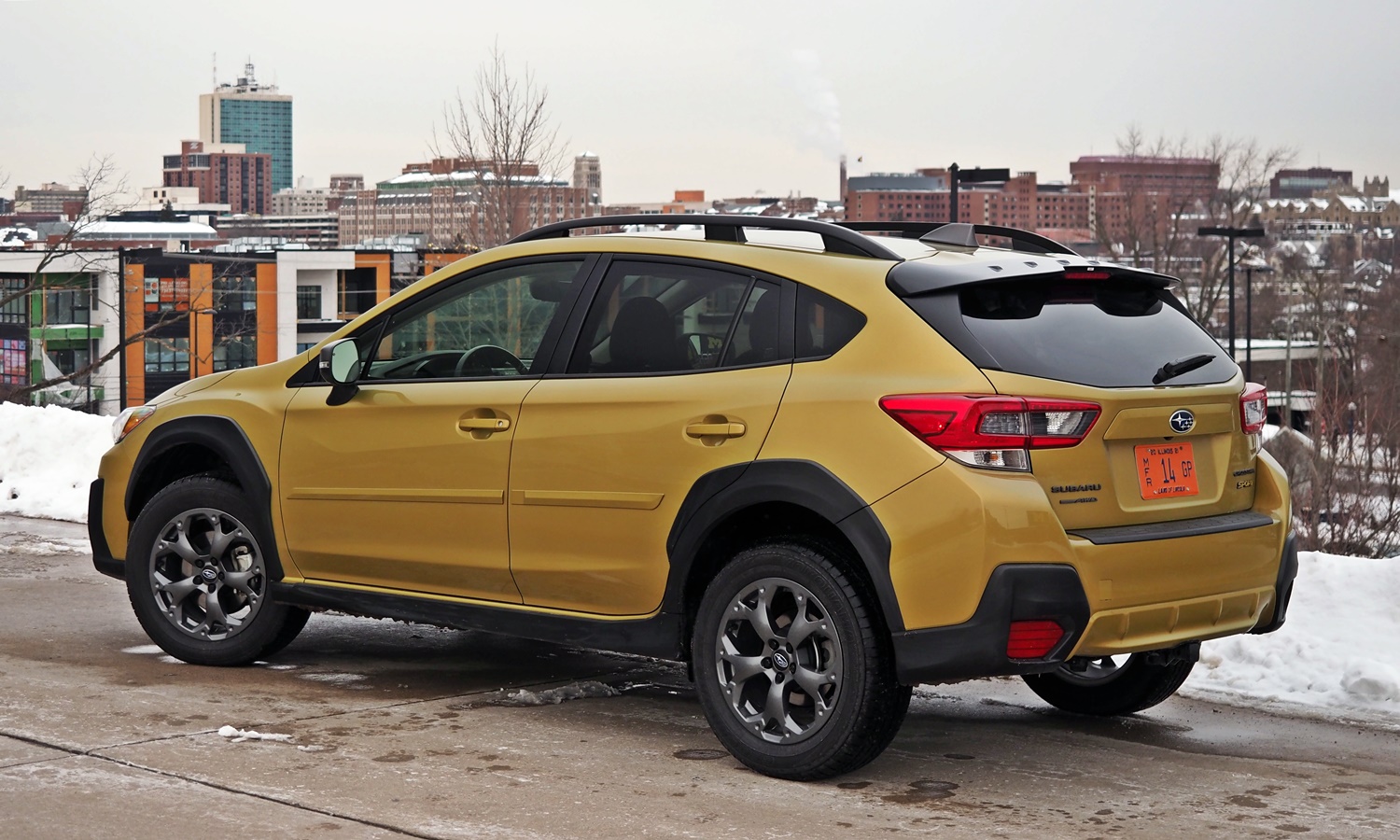 Note how Sport cladding parallels some of the car's other lines. Nicely done as cladding goes. 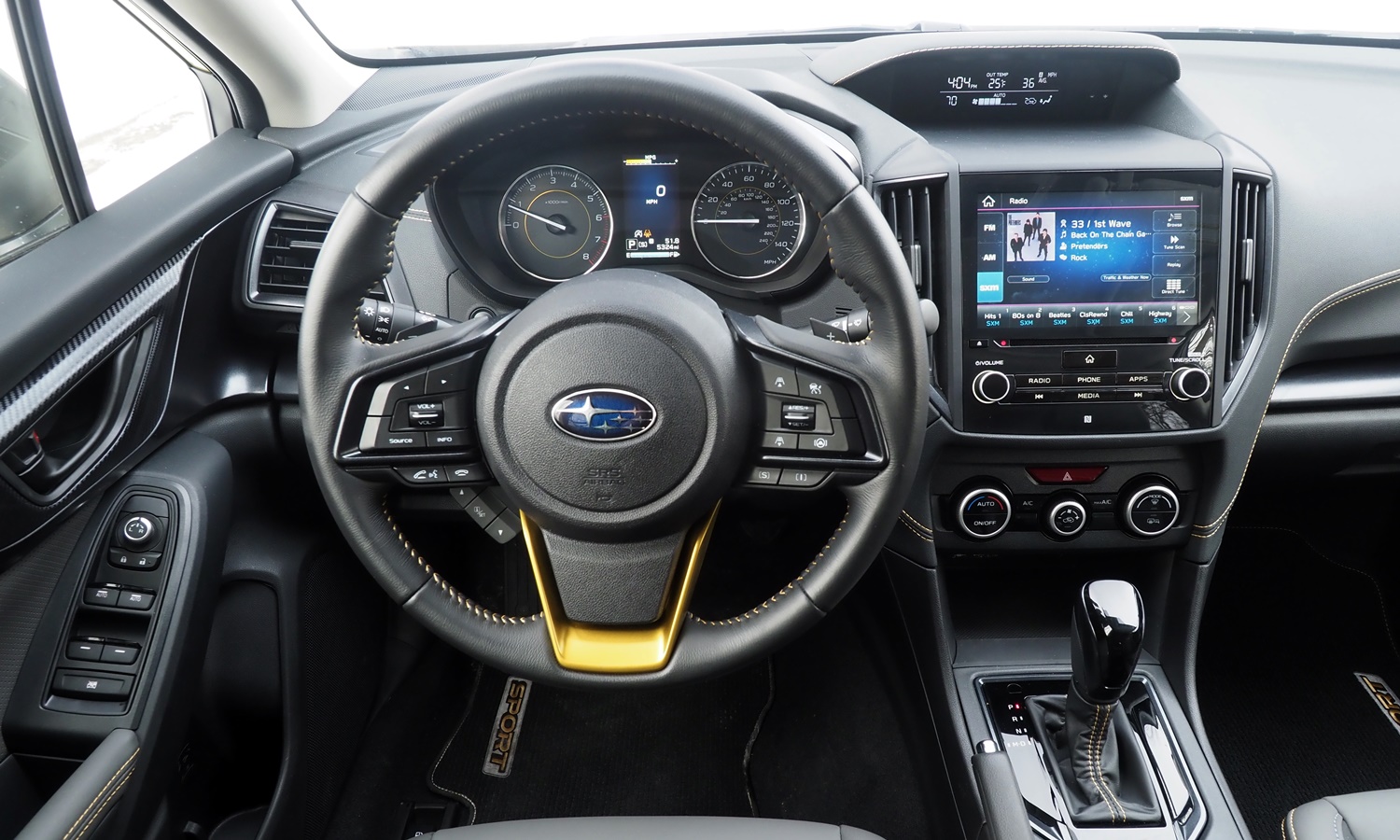 Back in the 2000s Subarus were prone to head gasket failures, and for this and other reasons could be somewhat expensive to maintain. For the past decade, though, their reliability has been much better despite a switch to CVT transmissions, which can be troublesome and expensive to replace in some other makes.

The generation of Impreza on which the Crosstrek is based has been in production since the 2017 model year, and so far has been very reliable. In our reliability survey only one in ten 2018 Crosstreks or Imprezzas required a repair in the year ending June 30, 2018.

We don't have reliability data for the Kia Seltos, which was introduced only a year ago. The turbo engine and dual-clutch automated manual transmission could be less reliable than the Subaru's larger, less-stressed non-turbo engine and CVT far down the road. But if you buy the Seltos new a warranty covers these for the first ten years or 100,000 miles. For second and later owners, the Kia's powertrain warranty is the same as the Subaru's: 5/60.

Subarus tend to ride well on even poorly surfaced roads, and the relatively small Crosstrek is no exception. The Kia Seltos has a bumpier ride, especially at low speeds.

The Subaru Impreza has a roomier and more comfortable rear seat than most compact hatchbacks. But in Crosstrek form the competition becomes small crossovers, and the rear seat in the Kia Seltos and some others is about equally roomy. A couple of adults should be comfortable back there.

The Seltos's cargo floor is less of a lift than the Crosstrek's, 29 inches vs. 31.5 inches. The Kia's cargo floor is also more versatile. You can raise it so the rear floor is even with the folded seats and has a storage compartment beneath it. Or you can lower it for maximum volume.

I strongly disliked one thing about the Subaru's audio system: it automatically turns on each time you start the car even if you turned it off during the previous drive. The only way I found to avoid this nuisance is to turn the volume all the way down rather than turning the system off.

Like most trim levels of the Kia Seltos, the Crosstrek Sport comes with a fairly basic 6-speaker system. A premium Harmon Kardon system is optional on the Limited and Hybrid. The Seltos SX includes a Bose system. 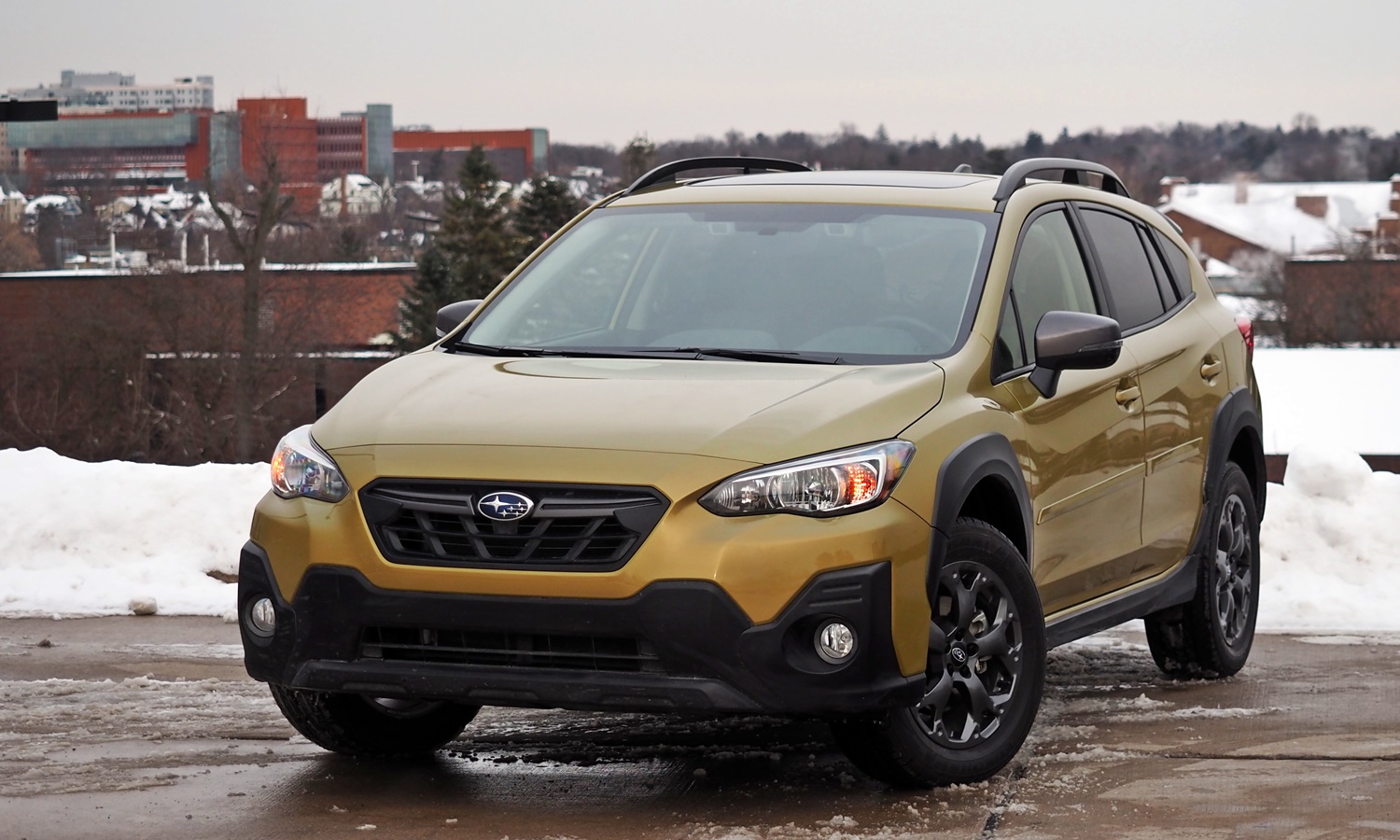 Subaru hasn't jumped on the big-grille bandwagon yet. Sport adds cladding around the fog lights. 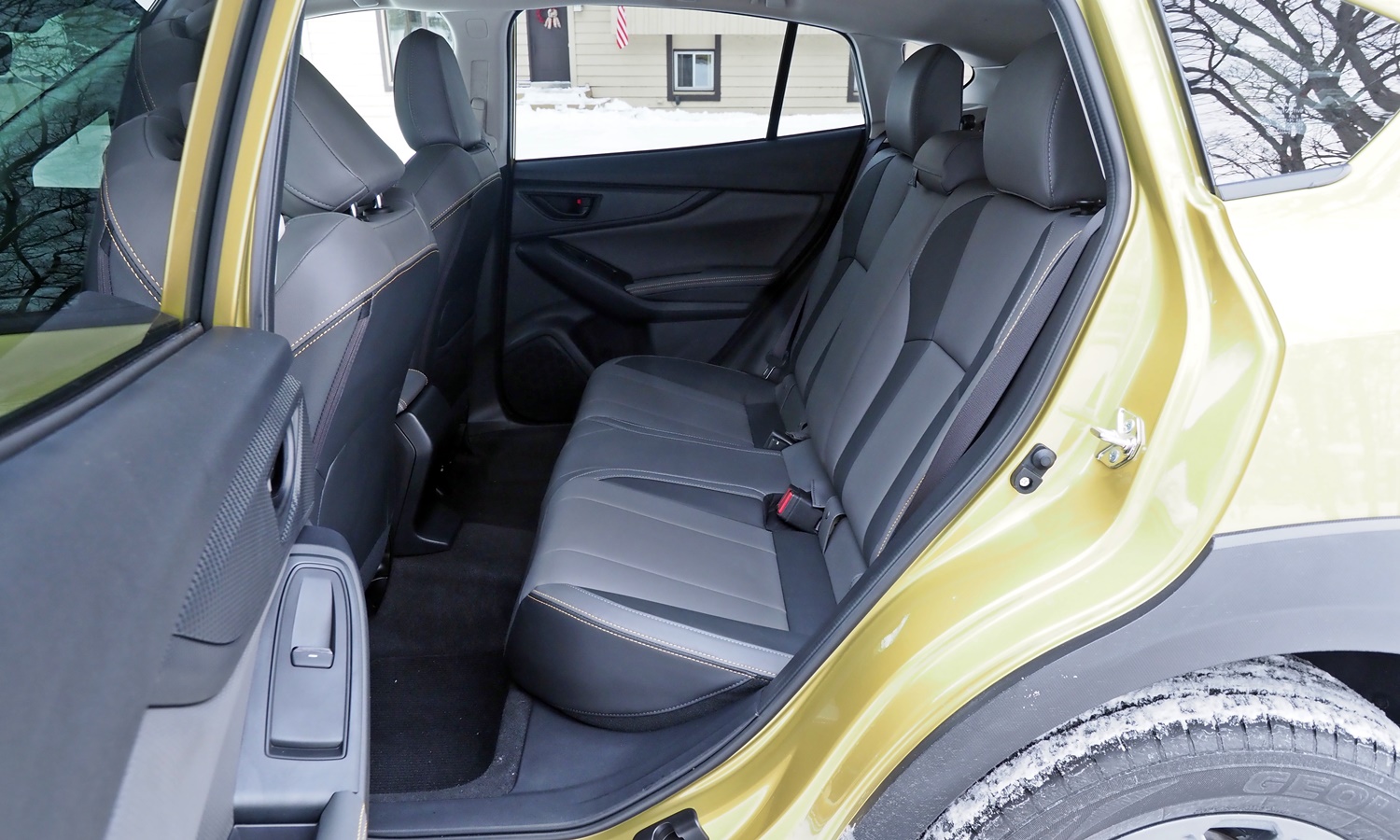 Roomy and comfortable rear seat for a vehicle this size.

With the 182-horsepower 2.5-liter engine, the Subaru Crosstrek Sport (along with the Limited) is significantly quicker than lesser trims, which continue on with a 152-horsepower 2.0-liter. But it still doesn't feel all that quick. Though the Kia Seltos SX has a lower power rating, 175 horsepower, it can get from a stop to 60 mph more quickly (figure about seven seconds flat vs. low eights) and feels stronger in even typical daily driving.

At highway speeds, the Subaru engine drones loudly enough that it could get tiresome. Wind noise is also above average.

The transmission is a CVT, which some people will mind. I was generally okay with it. The 2.5-liter engine's extra torque likely helped, as the CVT didn't have to spin the engine to high rpm and hold it there for decent performance.

My criticism here might be unfair. Before I tested the Crosstrek I had spent a week in a $75,000 Land Rover Defender, and this might have influenced my initial impression that the Subaru's interior looked and felt somewhat cheap and insubstantial. My impressions of the Kia Seltos's interior were more positive. Still, Subaru interiors used to look and feel very cheap. Those in their latest cars, including the Crosstrek, are a big improvement.

The Sport includes "Star Tex water-repellant upholstery." Lesser trims have cloth seats, while the Limited and Hybrid have leather. The "Star Tex" polyurethane fabric feels so soft that I wondered about its durability, but imagine Subaru thoroughly tested it. Subaru claims it should be much more durable than leather. It should also be much easier to keep clean than cloth. Subaru also claims that this fabric, unlike some synthetics, breathes, so it shouldn't become unbearable in hot weather.

The Crosstrek Sport has yellow interior accents, including quite a bit of yellow stitching. I much prefer the contrast these provide to all-black interiors like that in the Seltos SX.

I prefer knobs to buttons, and the Subaru Crosstrek's center stack features five large knobs. The Kia Seltos, though its controls are better than most, has only three smaller knobs.

Because of its hatchback basis, the Subaru Crosstrek has different proportions than pure crossovers. Notably, while it appears lower than the Seltos, it's actually the same height (63.6 inches). A few inches more length (176.5 vs. 172.0) plus a lower front end and hatchback proportions just make the Subaru appear smaller and lower.

Especially in Sport trim, which has chunkier cladding around the wheel openings, the latest Crosstrek has a sporty yet rugged look you don't get with a boxier crossover like the Seltos. At this point whenever Subaru designs an Impreza they know they'll be offering a lifted variant, so the crossover cues no longer appear tacked on. The Hyundai Kona, which is related to the Kia Seltos, has a shape more like the Crosstrek's. Don't care for the cladding or the lifted look? Then you'll prefer the Impreza, which costs a few thousand less (but doesn't offer the 2.5-liter engine or adaptive cruise).

Both the Subaru and the Kia are offered in a goldish yellow. It suits both of them well. On the Subaru I'm personally even more of a fan of the "cool-gray khaki," a pastel blue. But if you want the exterior to match the Sport's interior accents, get the "plasma yellow."

Compared to the Kia Seltos and other compact crossovers with upright styling, the Subaru Crosstrek has a more steeply raked windshield and a deeper instrument panel. I personally prefer when an instrument panel isn't so deep, as this makes me feel more detached from the driving experience. But I also like how the Crosstrek feels more like a car than a crossover.

The Subaru Crosstrek handles with much competence, a moderate amount of lean, and decent feedback through the steering wheel, but little sportiness. I found the lifted hatchback very pleasant around town. On the highway, though, the light steering can feel overly quick and twitchy. For real fun in a Subaru you'll want a WRX.

The Subaru Crosstrek Sport somewhat underwhelmed me with its performance and interior materials, but it's quite possible my expectations were unrealistic. Those seeking a compact vehicle with all-wheel-drive and a full suite of driver assistance tech (including adaptive cruise) won't find any less expensive alternatives. Compared to other non-hybrid AWD vehicles, the Crosstrek is also more fuel-efficient. The Sport includes a more powerful engine (for thoroughly adequate if not thrilling performance), more rugged exterior styling, yellow interior accents, and water-repellant upholstery. For performance, style, and functionality, it's the Crosstrek to get.

A Kia Seltos is quicker and can hold more cargo. But the Crosstrek is more fuel-efficient, rides more smoothly, and could prove more durable down the road. Both are among the best values in small crossovers. Which between them is best will come down to personal priorities and subjective styling preferences. 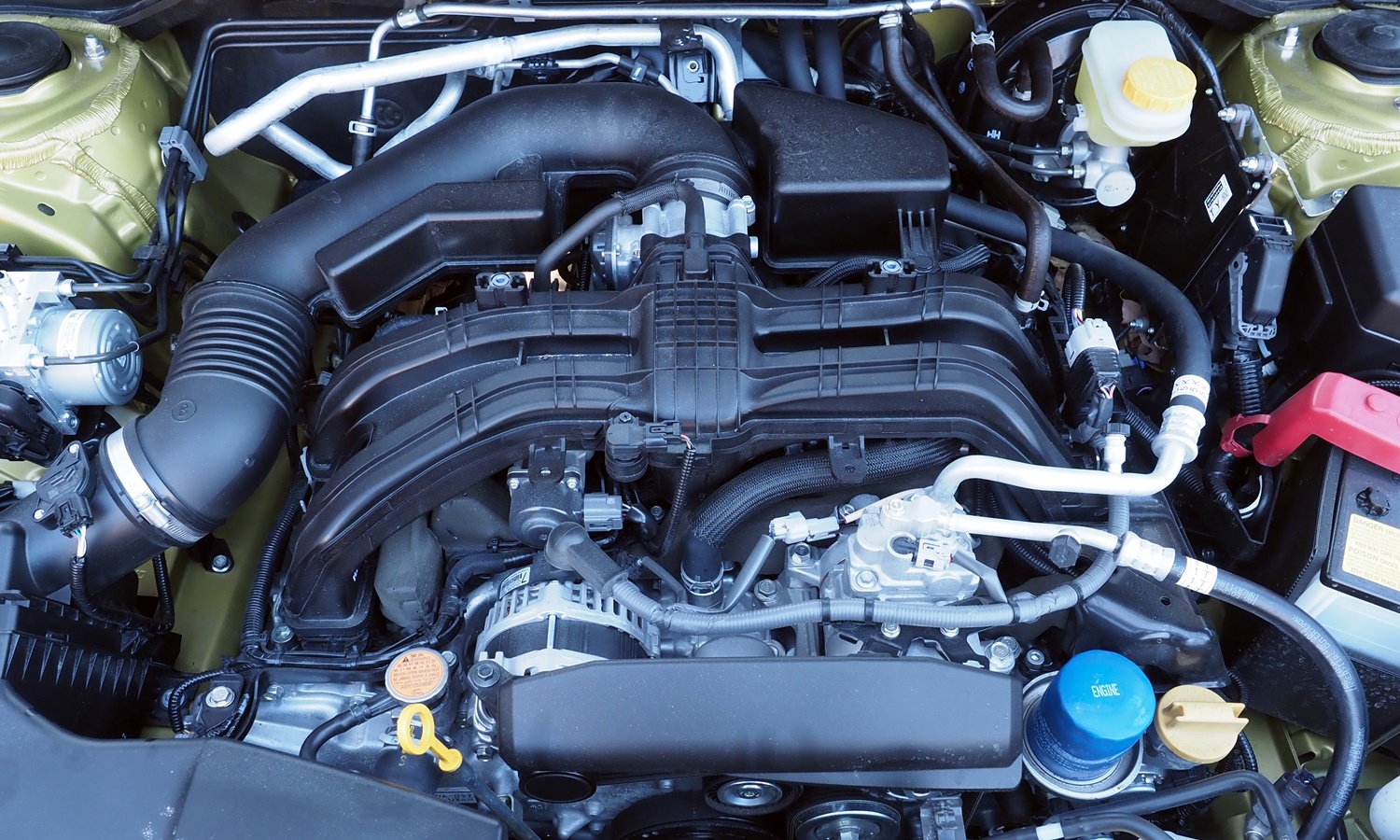 Subaru doesn't dress up the engine, and I'll fine with that. Agricultural noises. 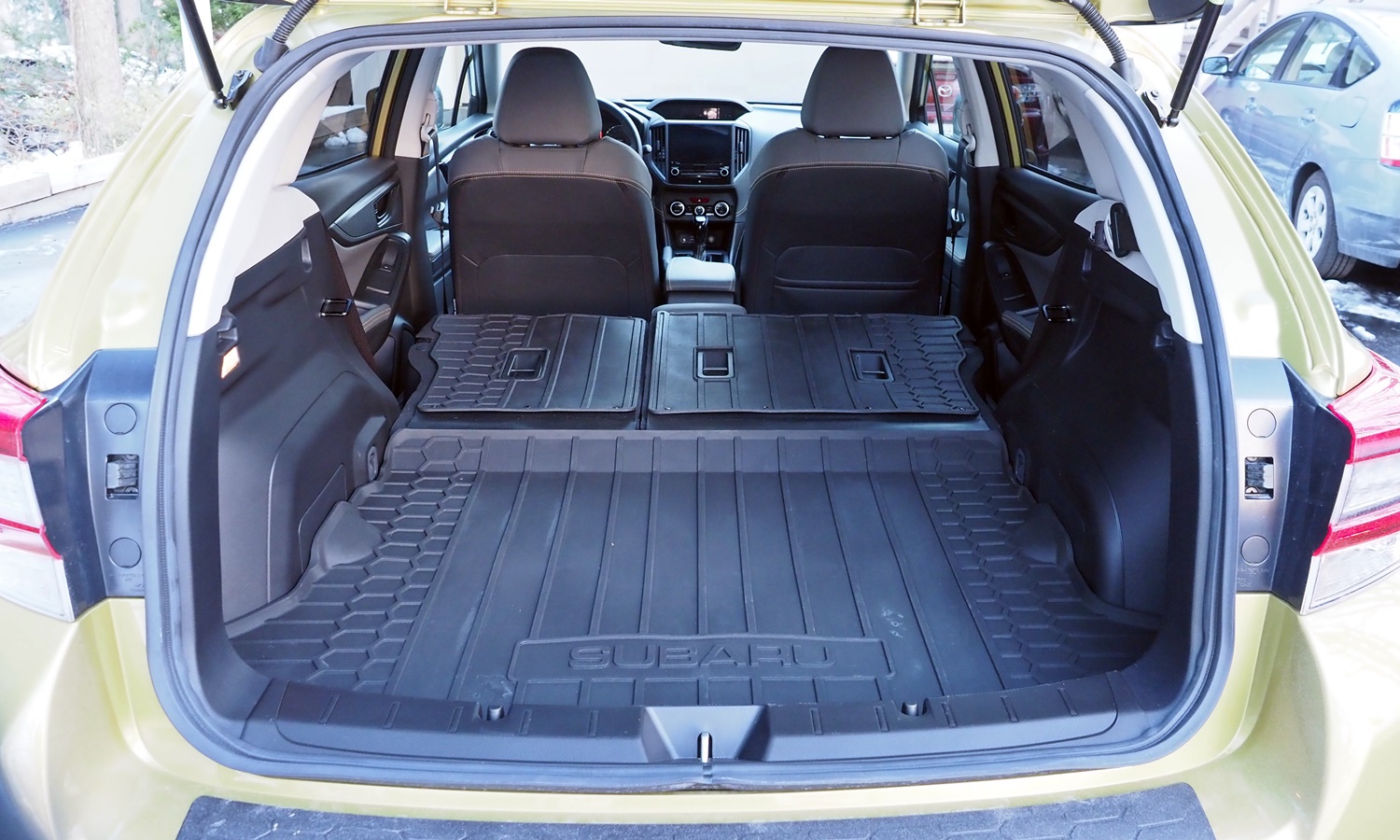 Subaru and Kia each provided an insured car for a week with a tank of gas.

More About the Crosstrek 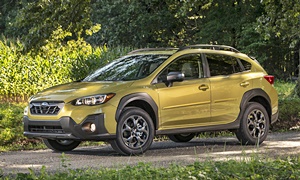 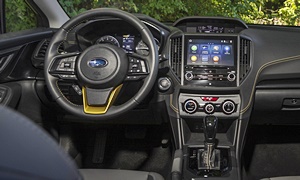