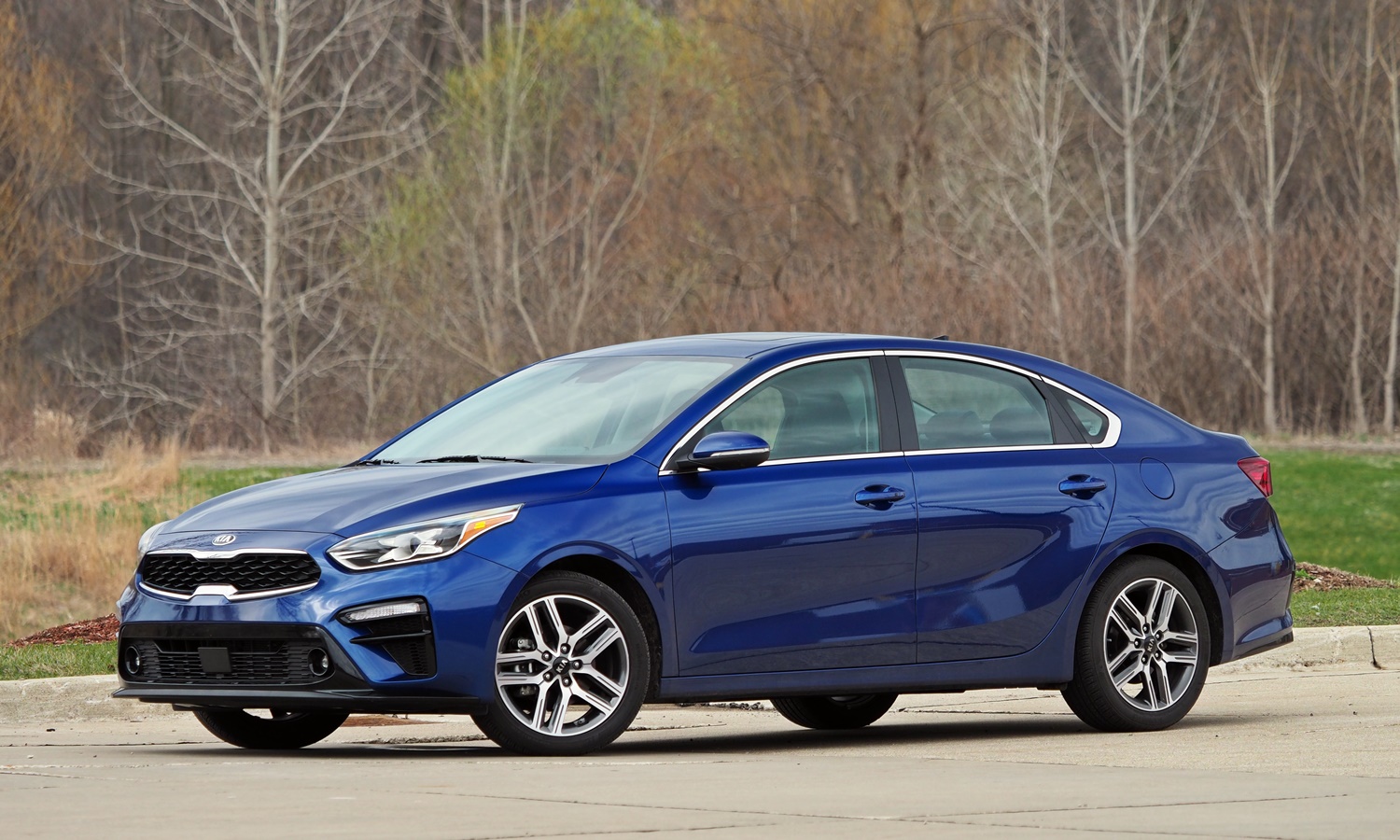 All three Detroit-based automakers have abandoned the compact sedan segment in favor of more profitable compact crossovers. Kia, on the other hand, redesigned its Civic-competitor, the Forte, for 2019. While the Forte was previously offered in three bodystyles, the coupe and hatchback did not make the jump. I hadn't planned to review the Forte, as it struck me as just another compact sedan in a world infatuated with crossovers, and thus destined for rental fleets. But then I was told it's quite good.

So, how good is it? And why might someone buy one instead of a Honda Civic? 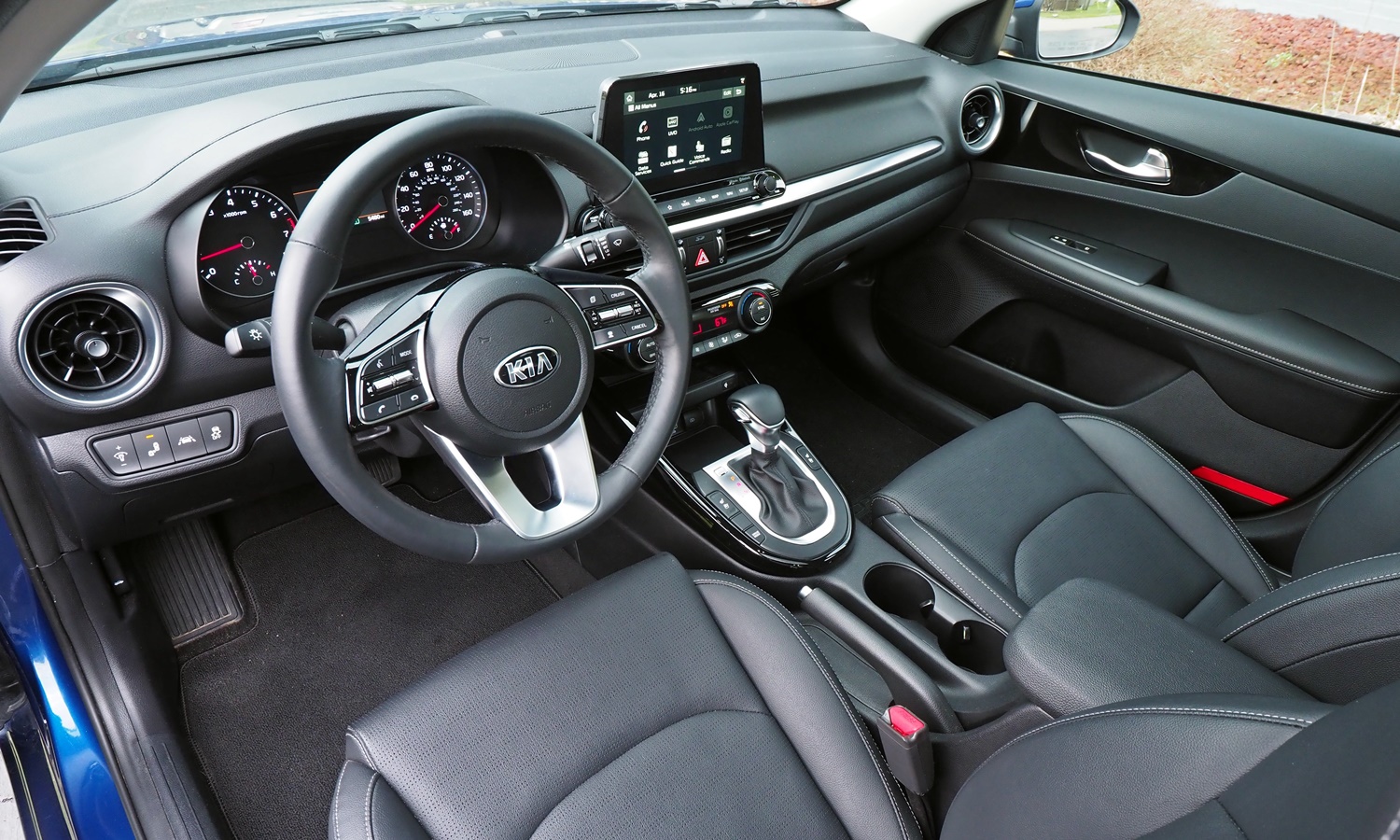 Restrained styling inside as well.

The list of reasons to buy a Forte begins with a traditional Kia forte: more features than you'll find on competitors at a given price point. Want ventilated as well as heated front seats in a compact car? You cannot get this formerly high-end feature in a Honda Civic or Toyota Corolla. It's standard on the Forte EX, the top trim with the 147-horsepower 2.0-liter base engine, and optional on the new-for-2020, more performance-oriented Forte GT, which has a 201-horsepower turbocharged 1.6-liter engine.

You cannot get cow-sourced leather seating surfaces in a Forte. Instead, Kia offers synthetic leather (standard on the EX, optional on the GT) that (unlike some) doesn't come close to passing as the real thing. Honda still offers real leather but Toyota, like Kia, only offers synthetic. Of the three, only the Honda offers heated rear seats.

The Forte isn't quite the class leader in comfort features. A VW Jetta SEL Premium has all of the above, plus a heated steering wheel. But the Jetta is also considerably more expensive.

As is becoming increasingly common, forward collision warning, automatic emergency braking, lane departure warning, and lane keep assist are standard even on the least expensive Forte. Blind spot warning is standard on the GT-Line (sport-look but 147 horsepower), EX, and GT. But if you want adaptive cruise control for 2020 you'll have to spring for a fully optioned Forte GT--this feature is no longer offered on the EX.

Nav is offered, but only on the EX in a "Special Edition" package that also includes a sunroof and a 360-watt Harman Kardon audio system. This package might only be offered for a limited time, as it's not currently shown on Kia's consumer site. The sunroof and audio system are also offered on the GT-Line and GT.

Ultimately, we return to the ventilated front seats. If you want them in a new sedan that lists for less than that Jetta SEL Premium's $28,590, I believe the $22,915 Forte EX is your only option.

Kia has been designing, engineering, and building much better cars, such that they have to lean much less on bargain pricing than in the past. But the compact sedan class as a whole has gotten so good that the Forte still must rely on a lower price. Even with the $1,500 Special Edition package, a Forte EX lists for just $24,415. A Honda Civic EX, which lacks ventilated seats, blind spot warning, nav, and premium audio, but which has adaptive cruise, lists for a little more, $24,630. Don't want (or at least don't want to pay for) a sunroof, nav, or premium audio? Then the unoptioned $22,915 Forte EX undercuts the Honda by $1,715.

The Forte has a roughly $2,000 price advantage over the redesigned-for-2020 Toyota Corolla. in XLE trim, the Corolla lists for $25,005 without a premium audio and nav package (but with a standard sunroof) and for $26,720 with it.

Consider total cost of ownership, and the Kia's advantage shrinks and could disappear entirely, as the Honda and Toyota will almost certainly retain more of their value when sold or traded...

...unless you get an especially good deal on the Kia, which is possible. 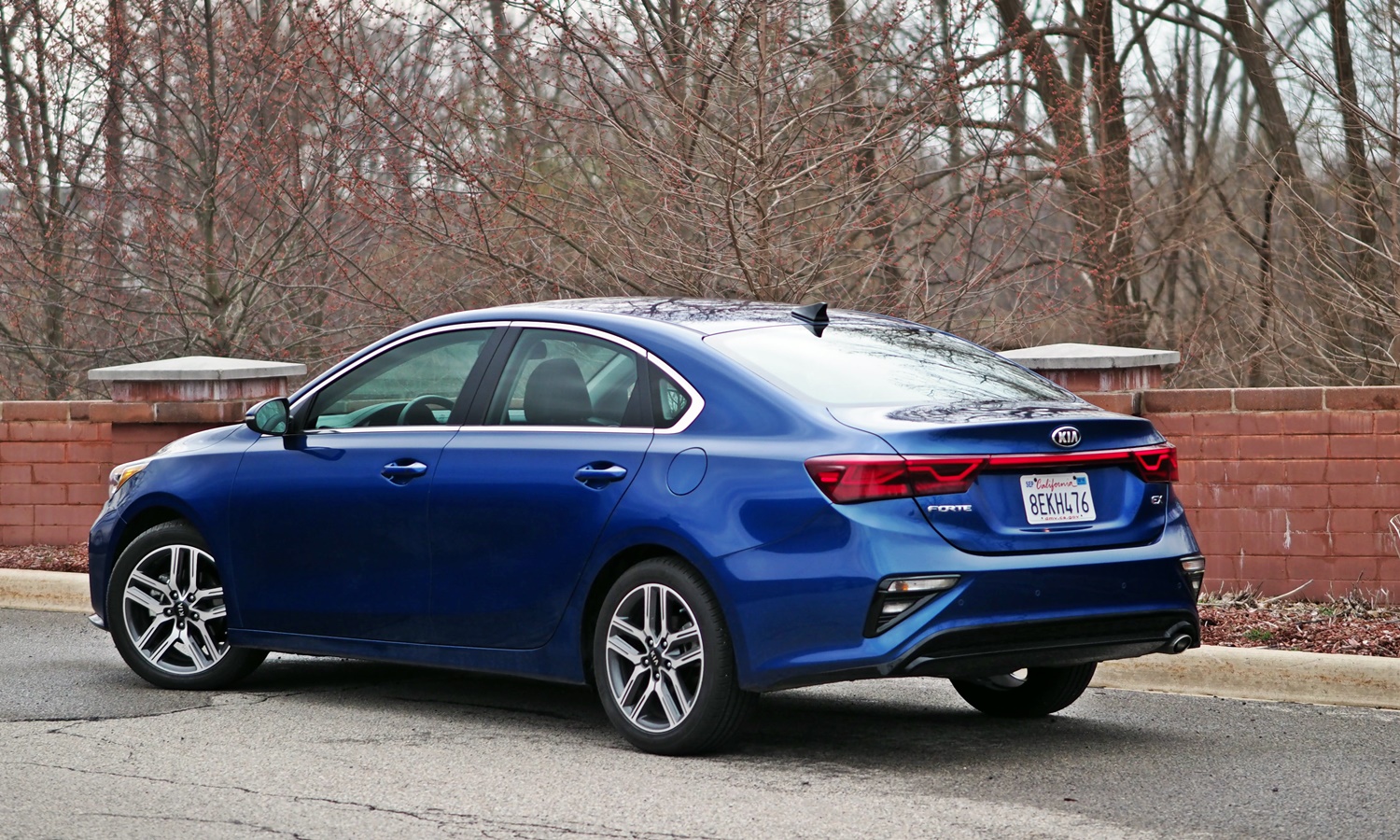 Few extraneous details. They didn't even cheat the side window opening. 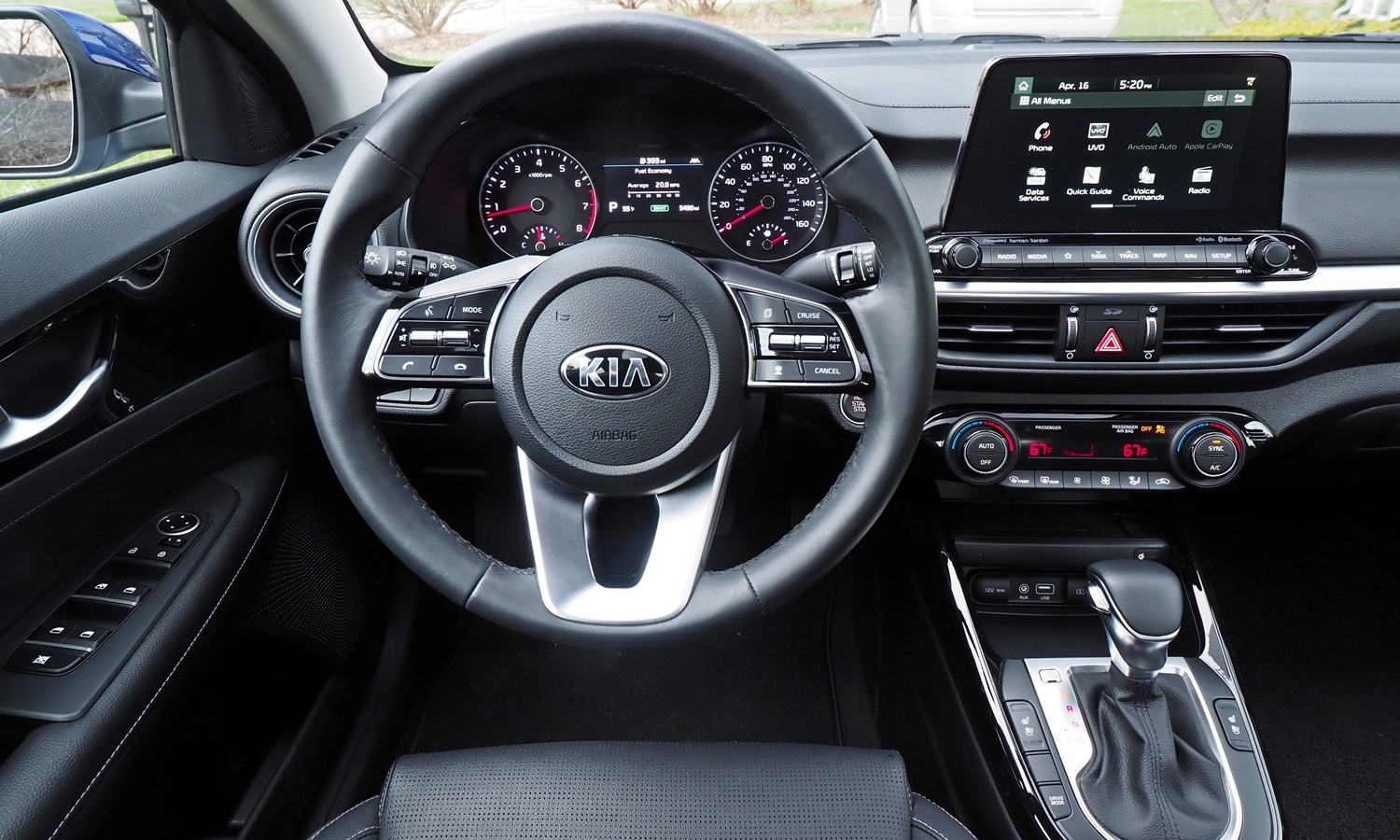 Kias tend to have well-designed controls. Their steering wheel hubs look cheap, though.

The Kia Forte's EPA fuel economy ratings of 30 mpg city and 40 mpg highway aren't quite best in class, but they're close. Unless you include the 55/49 Honda Insight and the 53/52 Toyota Corolla Hybrid in the class--then they're not so close.

In my real-world suburban driving I observed trip computer averages in the low 40s in the Forte, similar to a 2016 Civic LX with a similarly sized, similarly non-turbo engine. A Civic EX, with a turbocharged 1.5-liter engine, should do a few mpg better.

In the hybrid Honda Insight, I observed suburban trip computer averages in the 60s, but "only" 40 mpg on the highway, not even as good as the non-hybrids.

I found both rows of seats comfortable in the Kia. Outward visibility from the driver seat is pretty good, though the windshield is raked a bit much for my taste. Rear seat passengers enjoy a cushion comfortably high off the floor (unlike the Civic's) and a relatively open view forward.

I personally have issues with the shape of the front seats in compact Hondas. Both their lumbar bulges and their headrests just too far forward. Try thoroughly before buying.

The list of reasons not to buy a Kia Forte is shorter, and might only apply to the non-GT.

Kia, Honda, and Toyota all employ CVTs (continuously variable transmissions) in their compact cars. Historically, driving enthusiasts have disliked the sound and feel of powertrains with CVTs. But Kia programmed its CVT to fairly convincingly feel like a conventional automatic. The Forte's engine buzzes less than the Honda's at high RPM, rendering the residual CVT behavior less obnoxious.

The Forte GT uses a seven-speed dual-clutch transmission (DCT) rather than a CVT. Or a six-speed manual. I'd get the manual.

Much like Toyota's latest compact cars (such as the tested Corolla Hatchback), the new Kia Forte in non-GT form handles with commendable stability and precision, but does not feel sporty. A Honda Civic feels somewhat sportier and is more fun to drive. The Forte GT should address this deficit. I enjoyed driving a Hyundai Elantra Sport with the same turbocharged 1.6-liter engine and a related chassis. A manual transmission, also offered in the Forte GT, helped.

Toggling the Forte's drive mode to "sport" firms up the steering a bit, but also makes the CVT more frenetic. You cannot separately toggle the steering and powertrain modes. 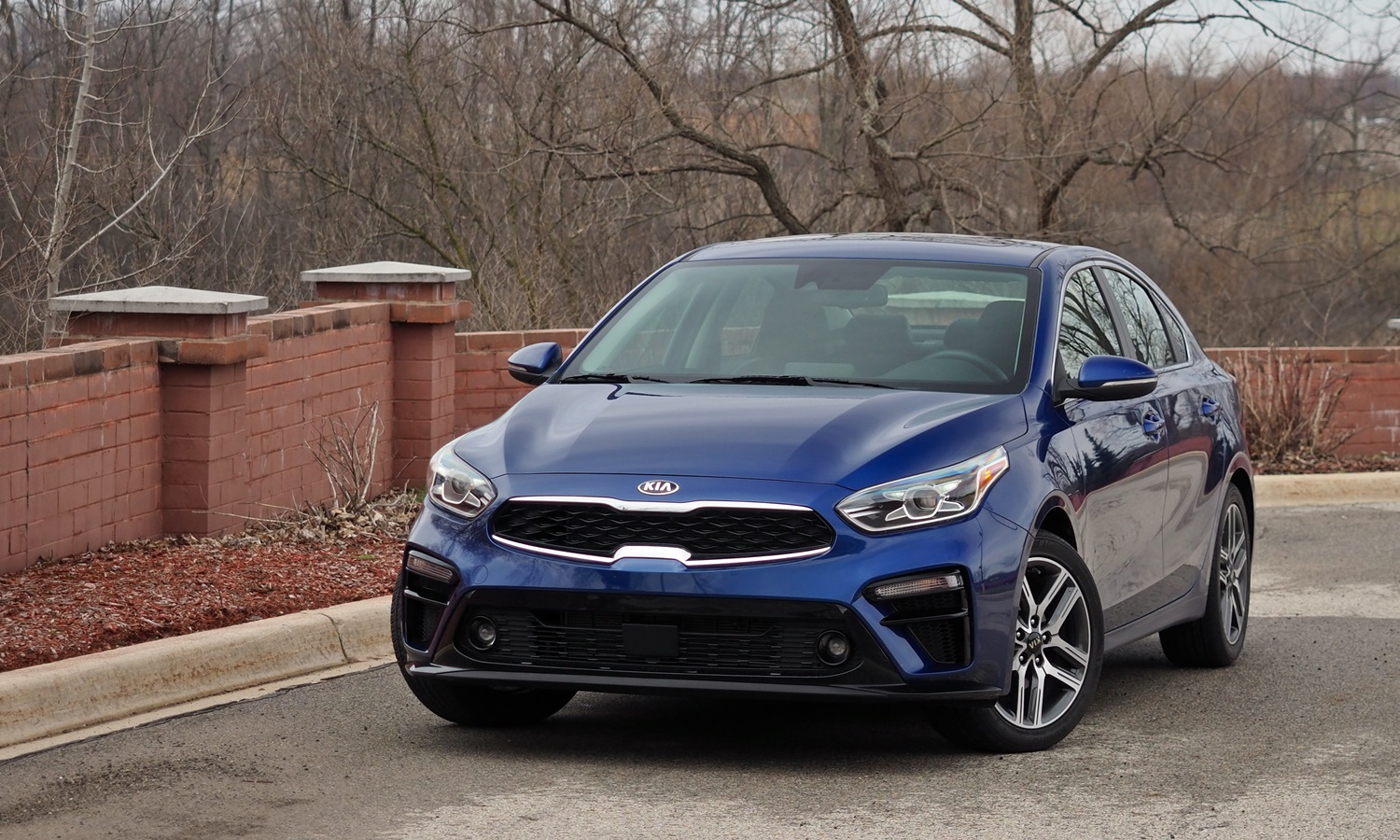 Upscale headlights, modest grille. If only the luxury makes still exercised this level of restraint. 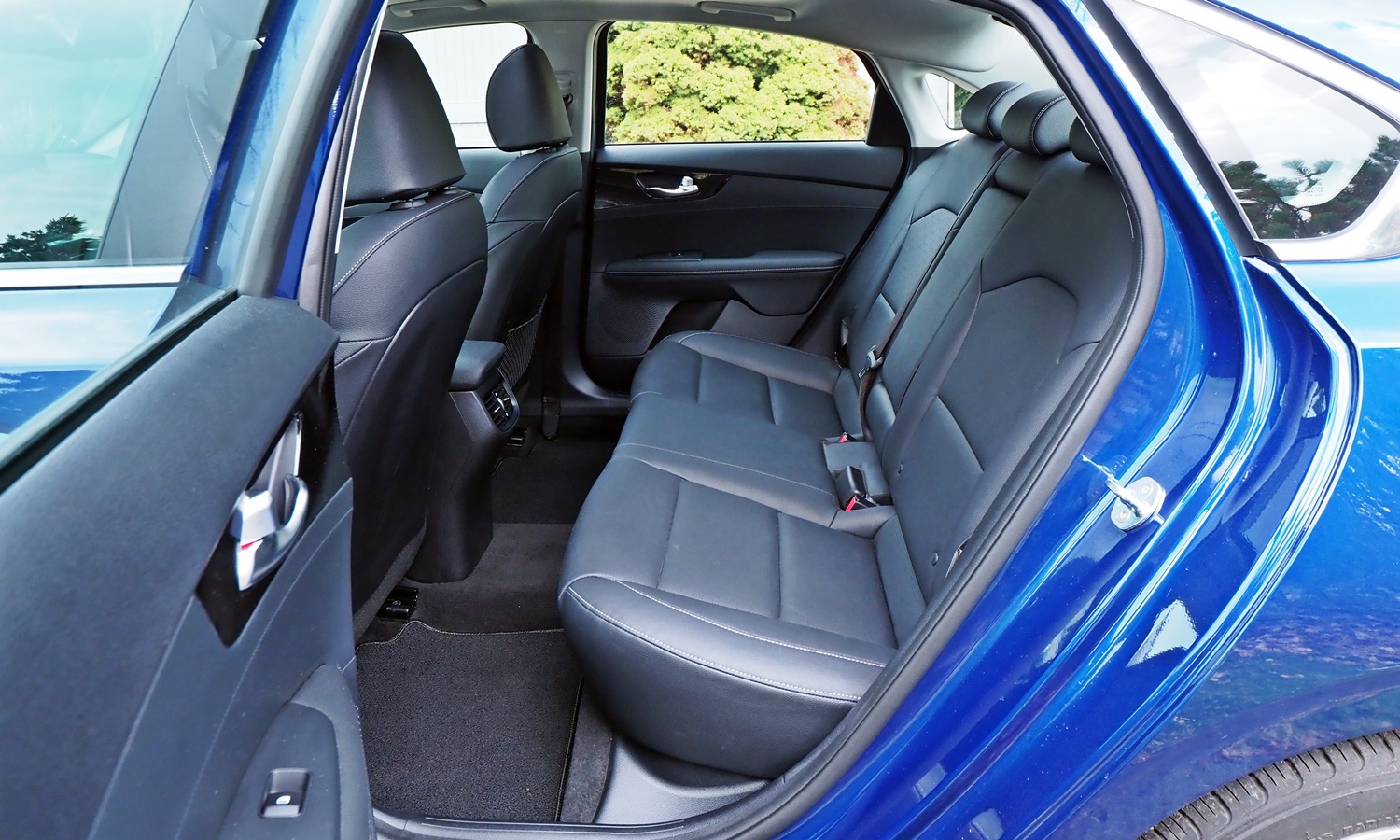 The Kia Forte's exterior styling is handsome and more upscale than the Corolla's, but it is derivative of VW's and is not distinctive or memorable. The Honda Civic, though it has some questionable details, makes more of an impression. This is of course a matter of taste. You might find the new Forte strikingly attractive. The blue of the tested car makes this more likely.

The Kia Forte's interior styling is similarly tasteful but unremarkable. A Honda Civic interior is more distinctive and sportier. A Mazda3 interior looks and feels much more upscale. The Toyota Corolla and VW Jetta, though, at best match the Kia in this area.

The main problem with the latest Kia Forte is that most competitors are about equally good. Across the entire class, performance-oriented variants excepted, few cars stand out as especially good or especially bad in any particular area. If you're seeking comfortable, dependable, easy-on-the-eyes transportation, you should be satisfied with any of them. The Kia's main advantages come down to a longer standard warranty and a somewhat lower price, especially up front. Plus, if you desire them, I don't think you'll find another car with ventilated front seats anywhere near $23,000. 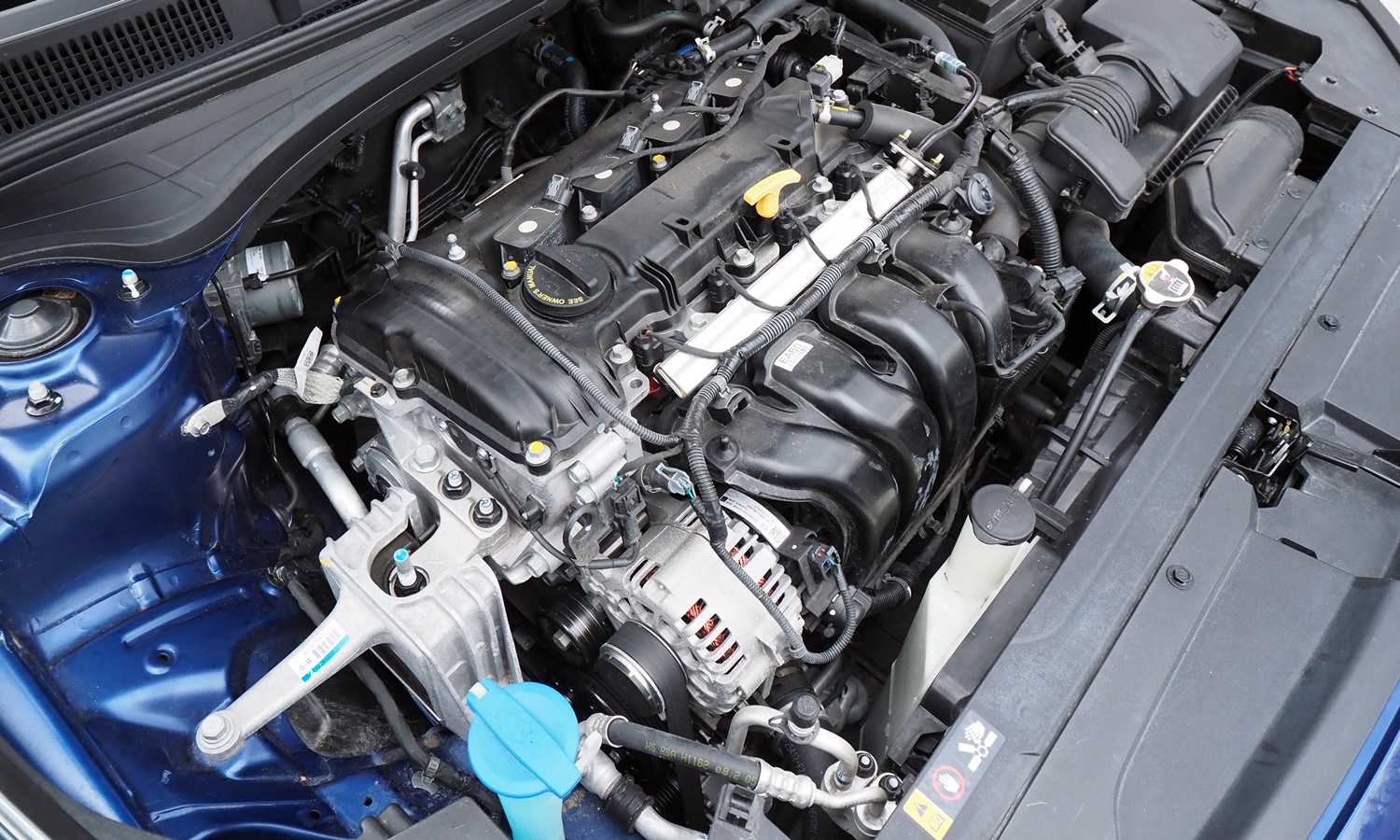 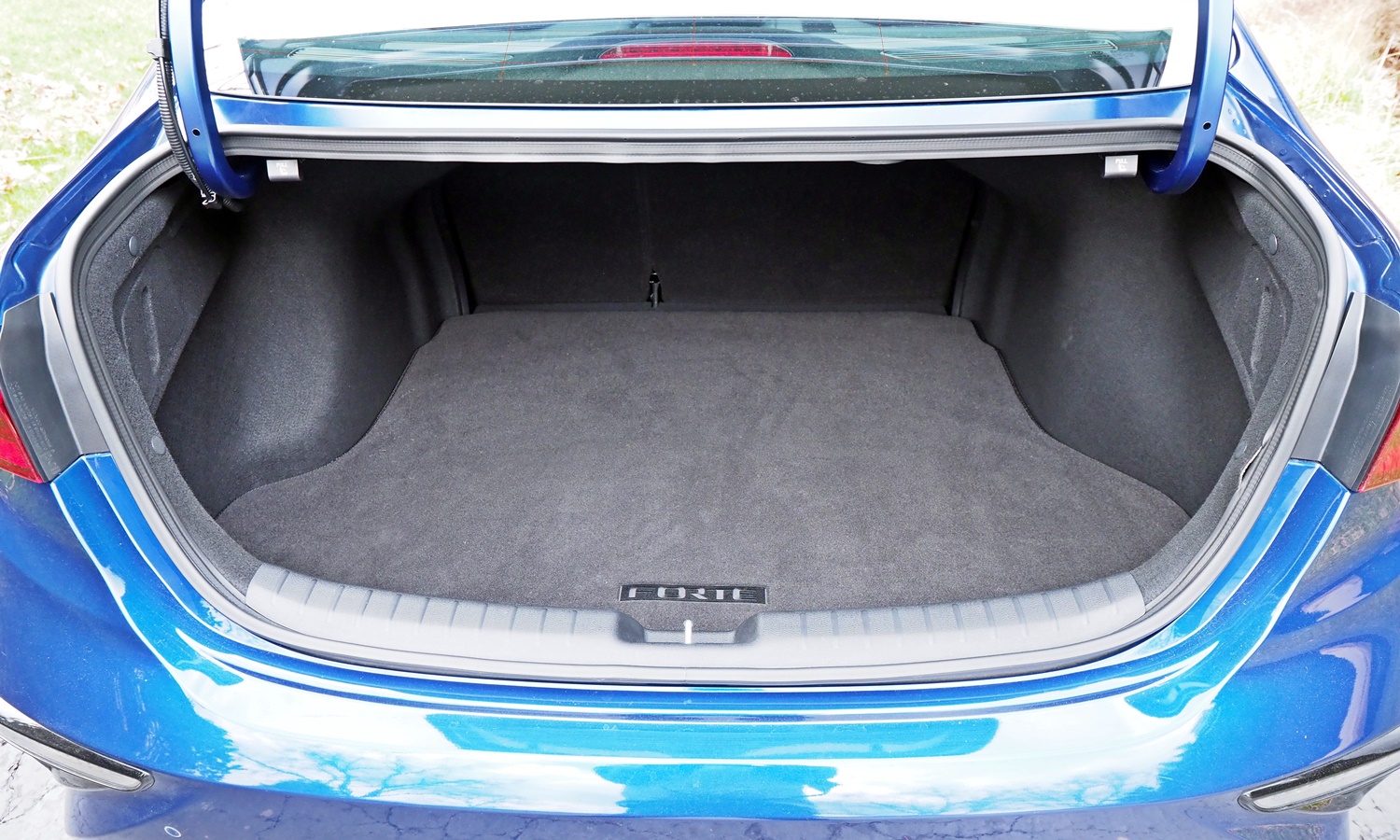 Trunk typical of the class.

Kia and Honda each provided insured cars for a week with a tank of gas.

More About the Forte 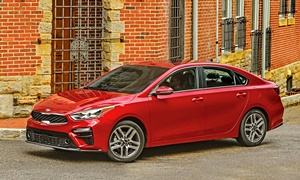 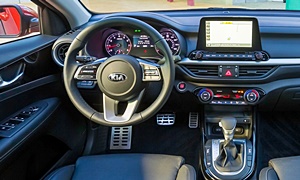