2021 Toyota Highlander Pros and Cons: Why (Not) This Car? 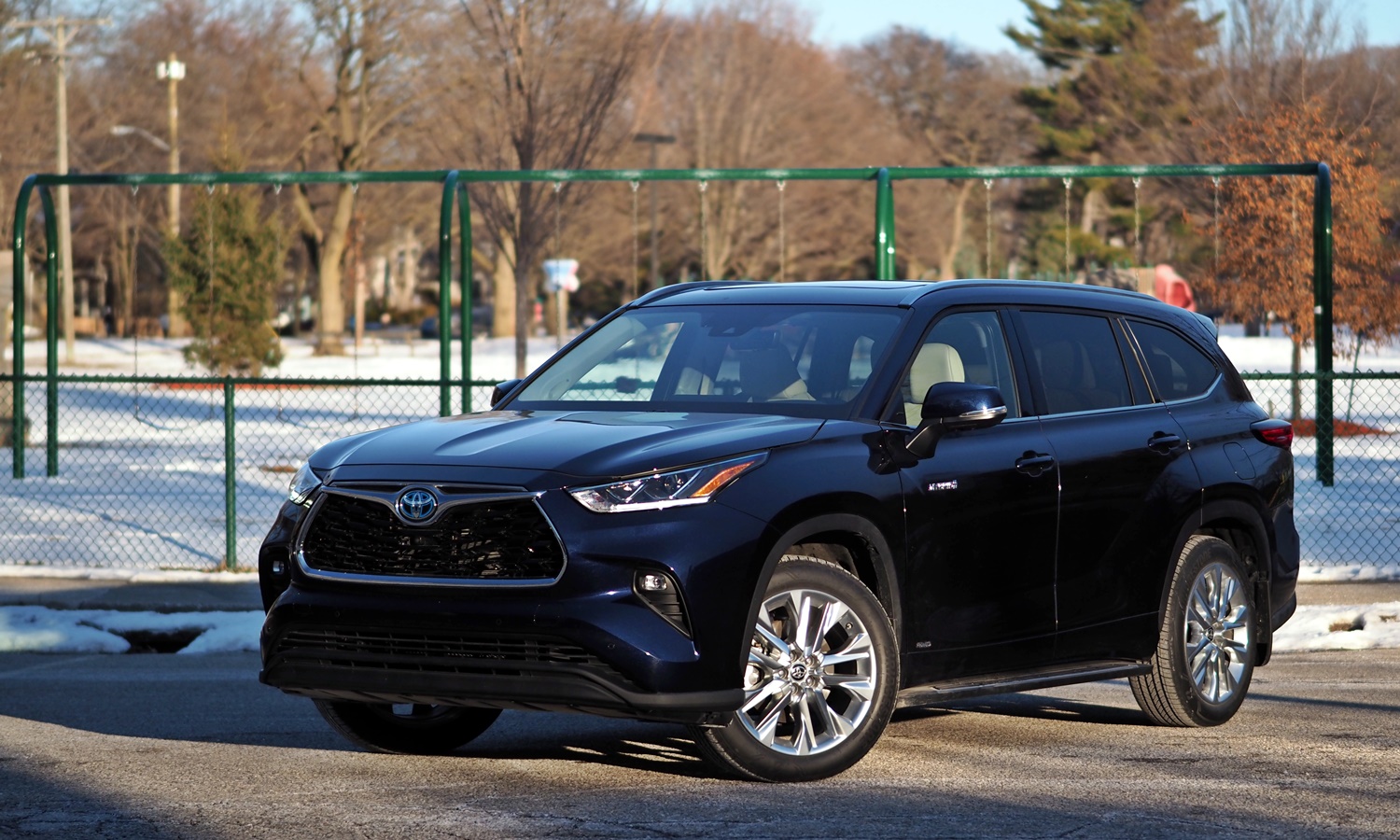 The Toyota Highlander was the first three-row vehicle offered in hybrid form, and for a decade after its 2006 model year intro it faced no serious competition. But in the past few years an increasing number of alternatives have emerged, including some plug-in hybrids and the much more expensive but fully electric Tesla Model X. In response, when Toyota fully redesigned the Highlander Hybrid for the 2020 model year it...replaced the V6 used through 2019 with a four-cylinder related to that in the Camry sedan. Was this enough, or is the Highlander Hybrid no longer a compelling choice for people seeking a fuel-efficient three-row vehicle? Note: I haven't yet driven a Ford Explorer Hybrid or Kia Sorento Hybrid, so for now I've selected a GMC Acadia as the comparison vehicle because it's the last vehicle I reviewed that was similar in size. I'll update this review when I drive a closer competitor. 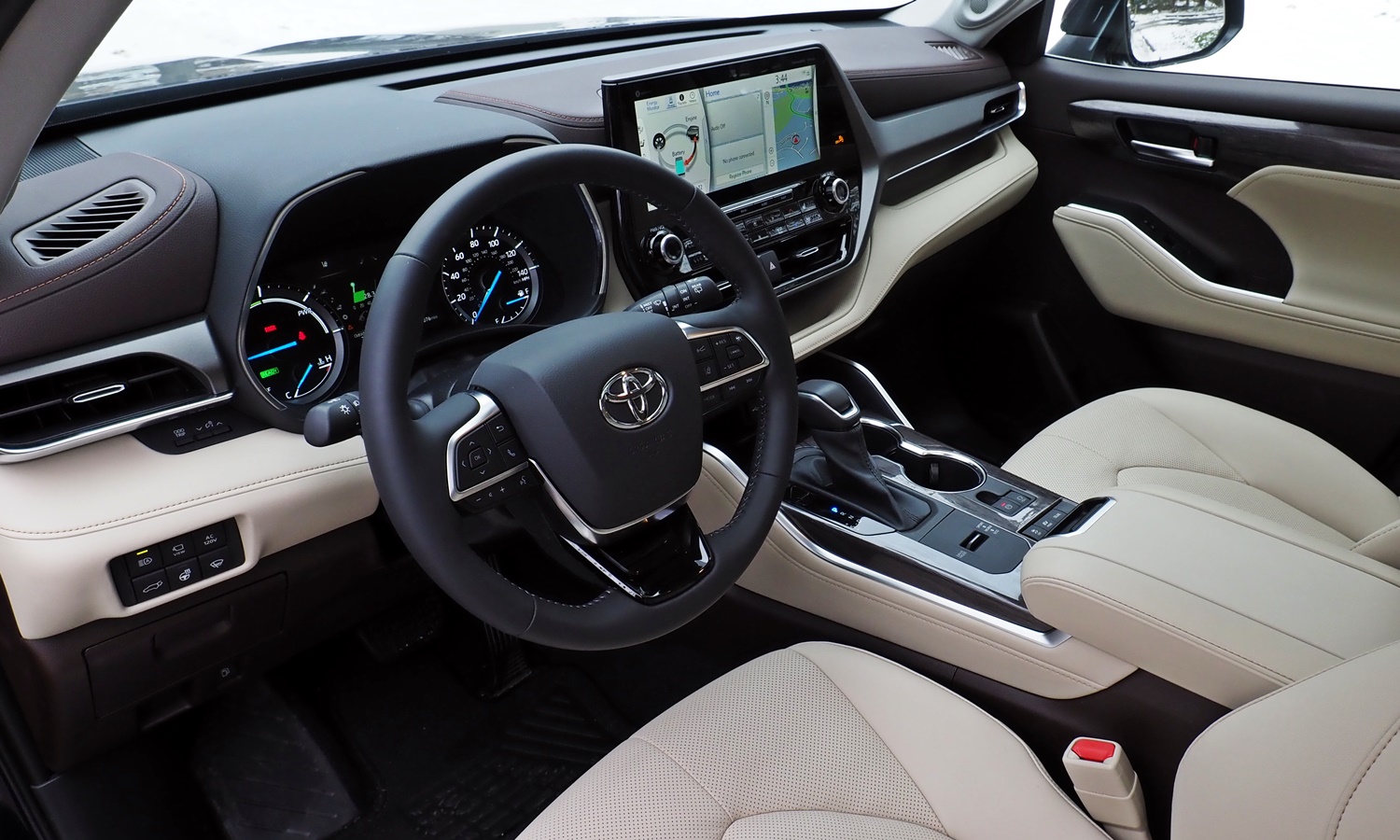 Most upscale Highlander interior yet. Plenty of soft stitched surfaces to go with the chunky trim.

Given the lack of a plug and its small battery pack, the Highlander Hybrid cannot be driven on electricity alone for a significant distance. If you want a plug-in hybrid (PHEV) three-row vehicle, your choices are limited to the Chrysler Pacifica minivan, Lincoln Aviator, and Volvo XC90 Recharge, though Kia will soon offer a plug-in Sorento. The Pacifica isn't offered with AWD, while the Lincoln and Volvo are much more expensive than the Toyota. Okay with a regular hybrid? Then your options also include the Ford Explorer Hybrid and the Kia Sorento Hybrid. Unlike the upcoming PHEV, the latter is not offered with AWD.

Thanks to its four-cylinder engine, the latest Highlander Hybrid is significantly more fuel-efficient than previous V6-powered generations and than all of the above except the Kia. Specifically, the 2021 HiHy with FWD managed 36 mpg city and 35 mpg highway in the EPA's tests. AWD costs a single mpg in the city and none on the highway unless you get the Limited (tested) or the Platinum, which are rated 35/34. The 2019 (offered only with AWD) managed just 30/28 or (in the upper trim levels) 29/27. The larger and heavier Explorer can't even match those numbers: 27/29 with RWD and 23/26 with AWD (the latter not much better than the conventional Explorer's 20/27). The Sorento Hybrid bests the HiHy in the city with 39/35, but can fit only six people (vs. the Toyota's seven or eight) and is FWD-only. So, if you need to carry seven or either people or want AWD, the HiHy is your most fuel-efficient option.

Well, almost. The Toyota Sienna minivan, now offered only as a hybrid, rates 36/36 with FWD and 35/36 with AWD, so it's slightly more fuel-efficient than the HiHy. But many people refuse to buy the minivan despite its significantly roomier interior.

In my winter driving the Highlander Hybrid Limited AWD's trip computer reported averages around 36 mpg in the suburbs and 30 mpg on the highway.

For long-term reliability, Toyota's hybrid powertrains and the Highlander have proven class-leading track records. The hybrid's small battery pack is much less of a long-term concern than the considerably larger battery packs in PHEVs. Though the transmission is a CVT, as in other Toyota hybrids it's the planetary gear-based sort, not the belt-and-pulleys type that has been relatively short-lived in many applications. 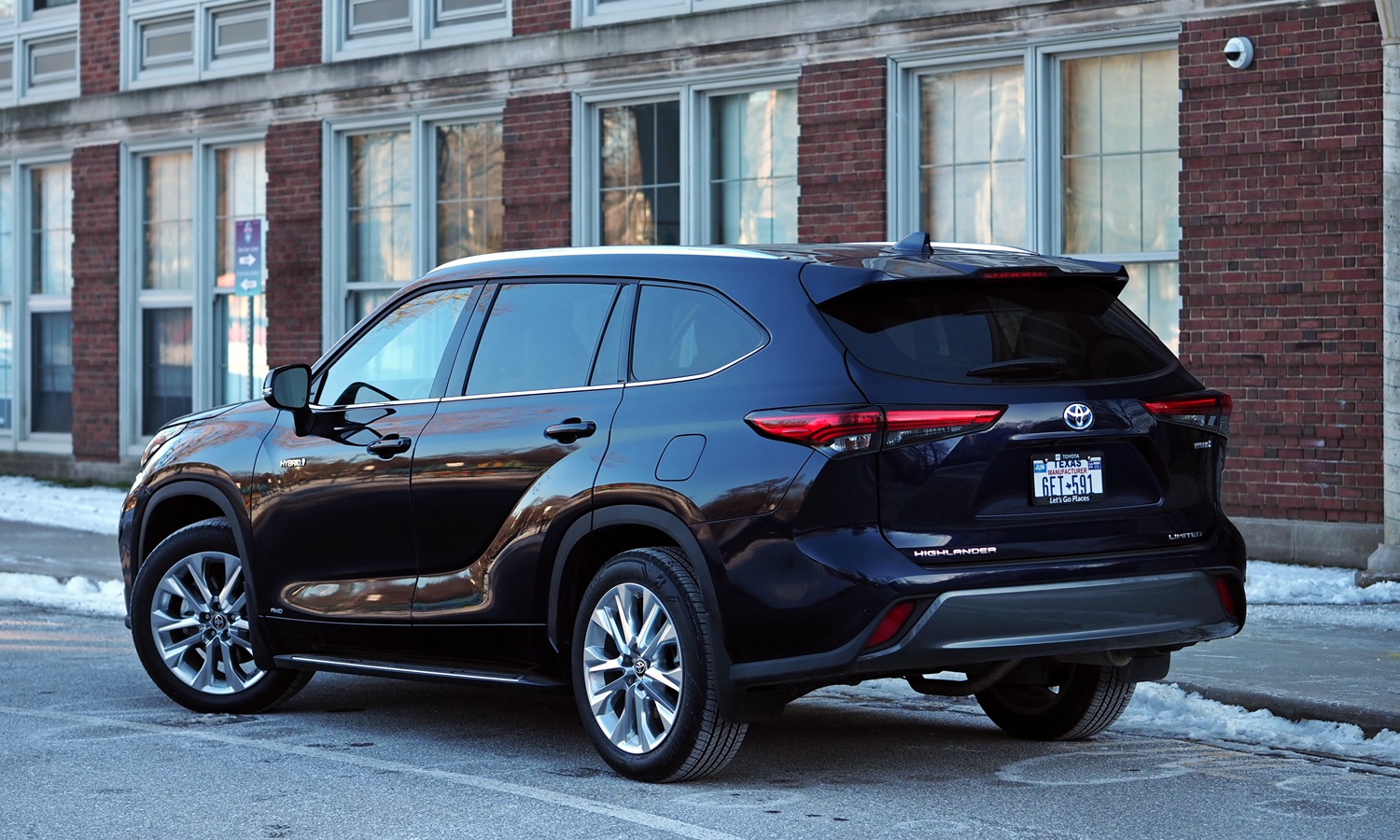 Body side S-Curve resembles those on the new Supra and the Sienna minivan. 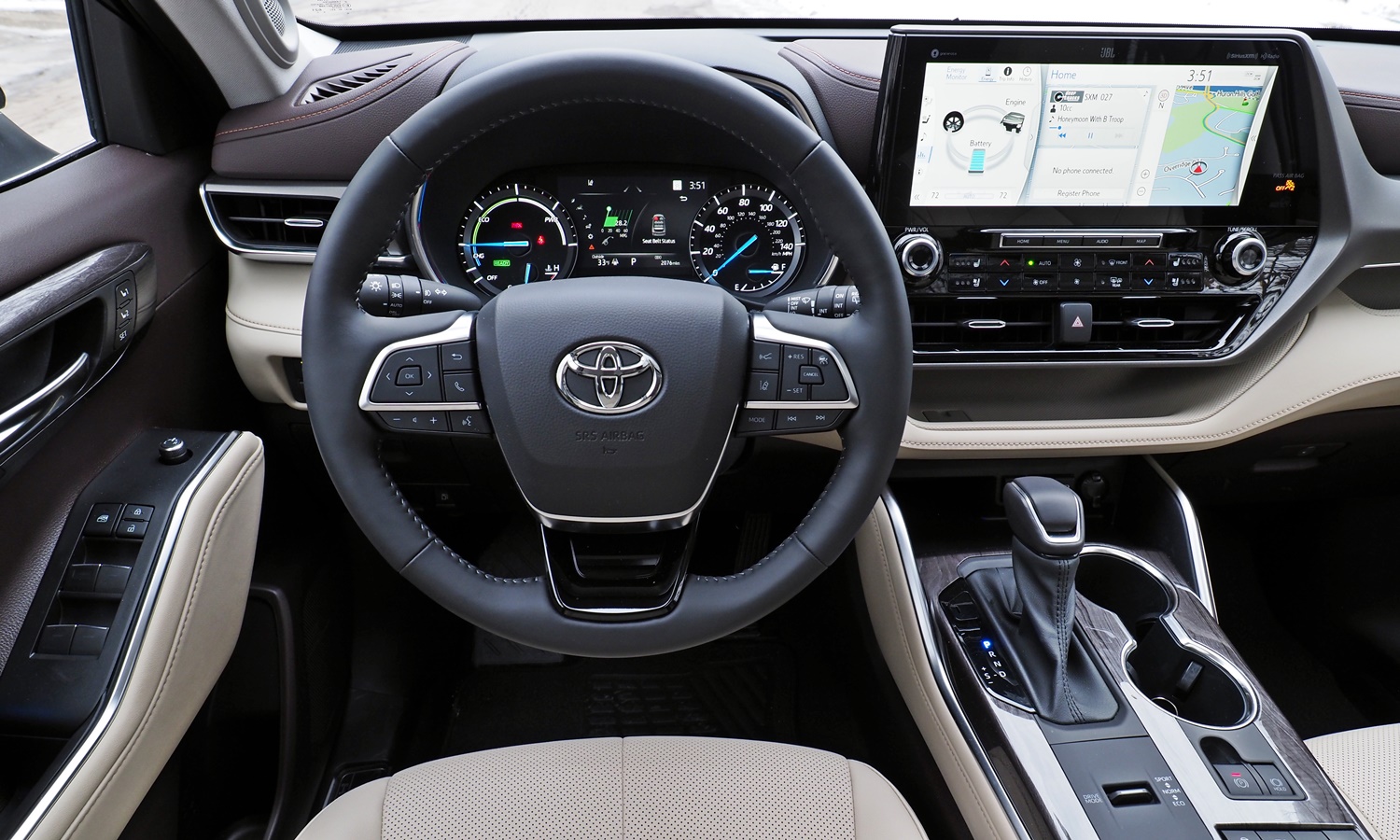 Controls mostly laid out well and easy to use. Two knobs for infotainment.

The Toyota Highlander's interior abounds with useful storage comparements, including a couple of shelves built into the instrument panel.

For a vehicle its size, the Highlander's cargo capacity with at least one row folded impresses thanks to compact packaging of its rear suspension. The larger Ford Explorer can hold only a few more cubic feet, while the Kia Sorento falls well short (75.5 vs. 84.3 cubic feet). In any of these three-row crossovers you won't find much cargo space behind the third-row seat. If you need that, you need either a large SUV or a minivan.

Since the lessons learned while developing the 1990 advent of Lexus, Toyota vehicles have often been among the smoothest and quietest vehicles in their classes, and the latest Highlander is no exception. You feel well-insulated from the outside world--except when accelerating vigorously; then four-cylinder buzzes intrude. The body structure feels solid.

The current Toyota Highlander has a cushy ride yet better control over body motions than previous generations.

With each redesign (for 2008, 2014, and 2020) Toyota has enlarged the Highlander, yet the crossover's third-row seat remains uncomforably low and tight. For adults to be even passably comfortable in the way-back the second row must be slid forward, rendering legroom there also marginal. Some three-row crossovers have much roomier and more comfortable third-row seats.

But if you want to be able to squeeze in eight people, Highlanders with a second-row bench can do this. Because they have significantly narrower third-row seats, the Ford Explorer and Kia Sorento cannot fit three people back there even in a pinch, so in hybrid form the former has a maximum capacity of seven people and the latter only six. (The Sorento PHEV will be able to seat seven.) This noted, if you want your adult passengers to have plenty of room, the practical capacity of each is four people.

With the 2020 redesign, the Highlander Hybrid traded a 3.5-liter V6-based powertrain with 306 combined horsepower for a 2.5-liter four-cylinder-based powertrain with 243 combined horsepower. Acceleration sounds and feels considerably less effortless than before, with the non-linear sensations typical of powertrains with CVTs. The Highlander Hybrid isn't downright slow. If you must get from a stop to 60 mph in less than eight seconds, it can do it. It just sounds buzzy and feels strained in the process. Driven more casually with the typical flow of traffic this isn't an issue.

The Explorer and Sorento hybrids use conventional stepped automatic transmissions (a ten-speed in the Ford and a six-speed in the Kia), so they likely sound and feel better in vigorous driving. With 318 combined horsepower, the Ford should also be significantly quicker despite a curb weight near 5,000 pounds. 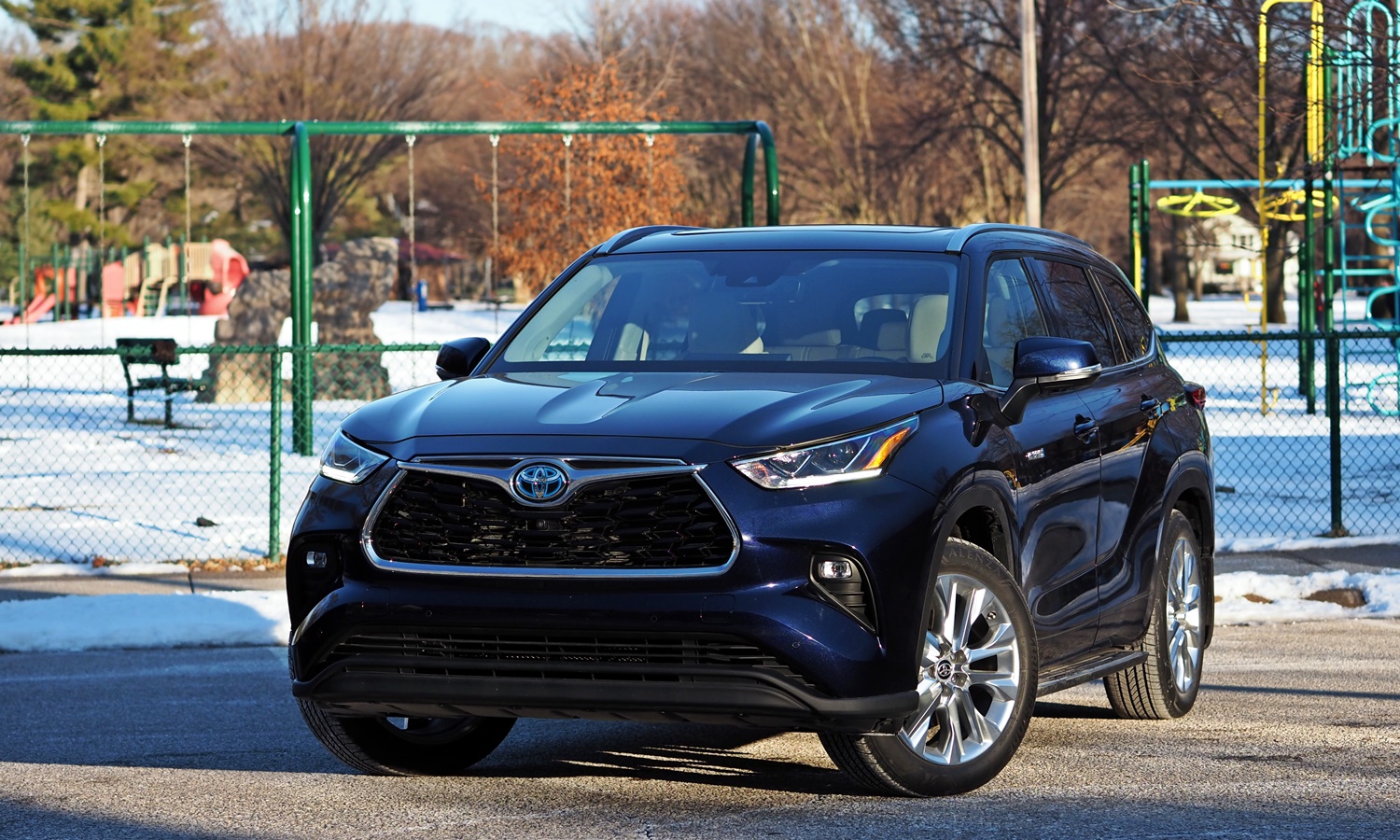 Somewhat menacing face. Complex surfacing of the body side. 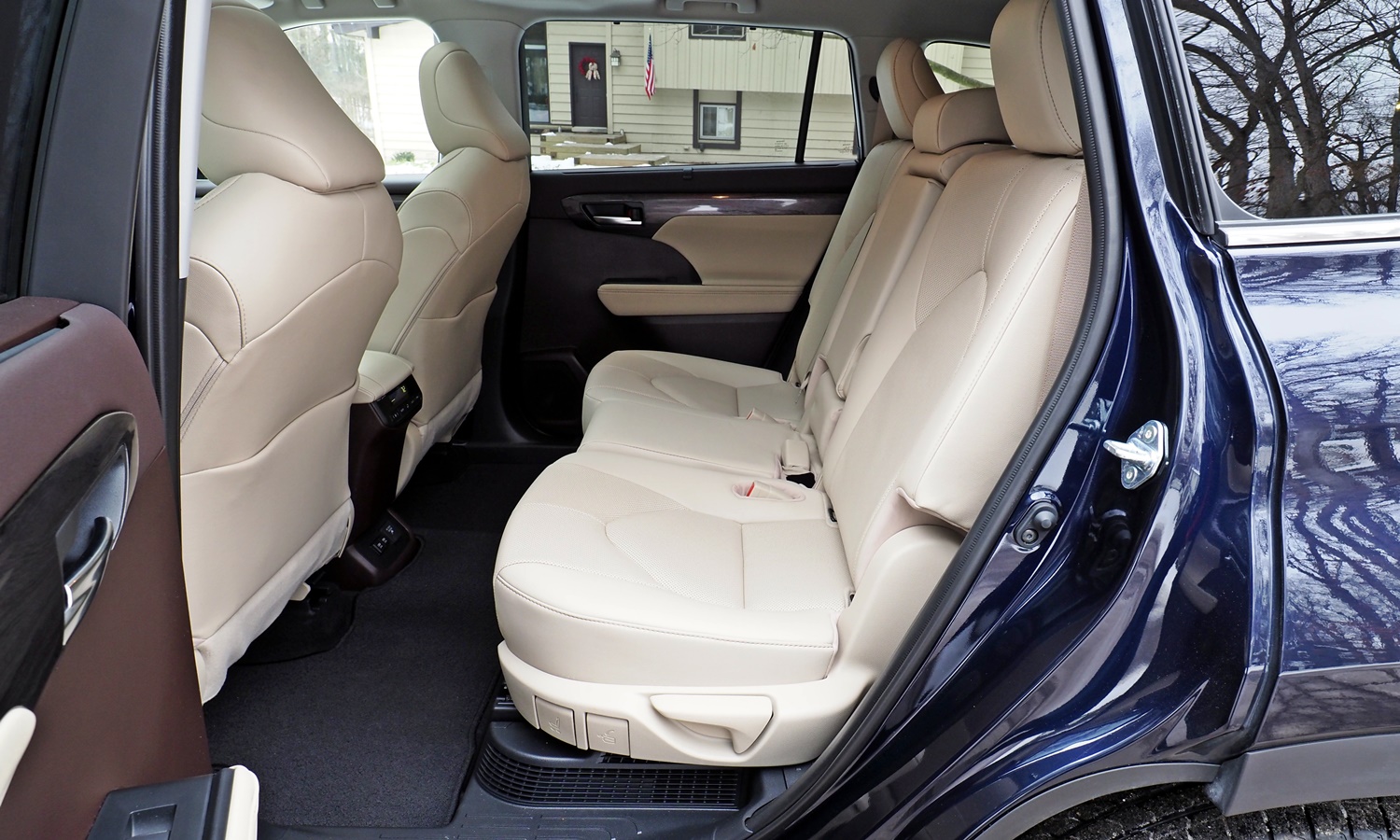 Second row comfortable if back far enough to stretch legs, but must slide forward for third row.

To provide the Highlander Hybrid with AWD, Toyota adds an electric motor to the rear axle. While such a system is fine for traction in snow, and a trail mode recalibrates it and other systems for better control on loose surfaces, the HiHy isn't intended for even moderately serious off-roading. Here the Ford Explorer should have an edge.

Little road feel makes its way through the Highlander Hybrid's well-insulated steering system, and even in "sport mode" the Toyota never feels sporty. But it maintains its composure better than past Highlanders. For a 195-inch-long, 76-inch-wide, 68-inch-tall, 4,595-pound crossover the Highlander feels fairly responsive.

Despite its rear-wheel-drive platform, the latest Explorer feels even more ponderous. The Kia Sorento, with somewhat smaller dimensions and a much lower curb weight (3,856 pounds in FWD EX form), should feel more agile.

Toyota vehicles often have weird styling, and the latest Highlander continues this tradition. Bulging rear fenders reference those on the Supra, but they look even more odd on a largish crossover than they do on a sports car. Perhaps some people will find the Highlander's overall appearance interesting. It's not ugly, but I'd be surprised if anyone thinks it beautiful.

The latest Toyota Highlander's interior styling could be more questionable than its exterior appearance. As in some GM crossovers and pickups, chunky plastic forms dominate. But fewer surfaces are hard plastic than in the past, and in general the interior looks and feels more luxurious and solid. Much real stitching on the instrument panel and doors is a nice touch.

The Toyota Highlander Hybrid starts just below $40,000, but in Limited AWD form (as tested) pushes $50,000. The Platinum is a little more still. The Kia Sorento is less expensive, while the Ford Explorer is more expensive.

With the 2020 switch from a 3.5-liter V6 to a 2.5-liter four-cylinder engine, the Toyota Highlander Hybrid's performance has taken a hit. Acceleration remains better than adequate, but the subjective experience when driven with a heavy right foot leaves much to be desired. This isn't a vehicle anyone's going to buy for driving thrills.

If, on the other hand, you drive a three-row crossover no more vigorously than the typical flow of traffic, you'll find the Highlander Hybrid smooth, quiet, comfortable, and generally pleasant. What's more, the hybridized four-cylinder engine enables much better fuel economy than the V6 did. Since "the most fuel-efficient seven-or-eight-passenger gasoline-powered crossover" is the model's raison d'etre, this seems a worthwhile tradeoff.

Sure, hybrids haven't been the hot new thing in a while. If you want the leading edge of technology you'll want an EV, or at least a hybrid you can plug in. But as a conventional hybrid, the HiHy it has a lower purchase price and no extremely expensive battery pack replacement even in the far future. For long-term reliability in a fuel-efficient three-row crossover, this Toyota remains your best bet.

Need enough space for adults to ride in comfort in all three rows or for an entire family's luggage behind the third row? Then get over whatever resistance you might have to minivans and get the Toyota Sienna with the same powertrain and much more interior space. The Ford Explorer Hybrid is somewhat roomier than the Highlander, and has stronger performance, but isn't nearly as fuel efficient and has cheaper interior materials.

Add it all up, and the new Toyota Highlander Hybrid remains a compelling choice for those who want an efficient, reliable three-row vehicle, but who don't want a minivan and who are concerned about the long-term reliability of plug-in hybrids. 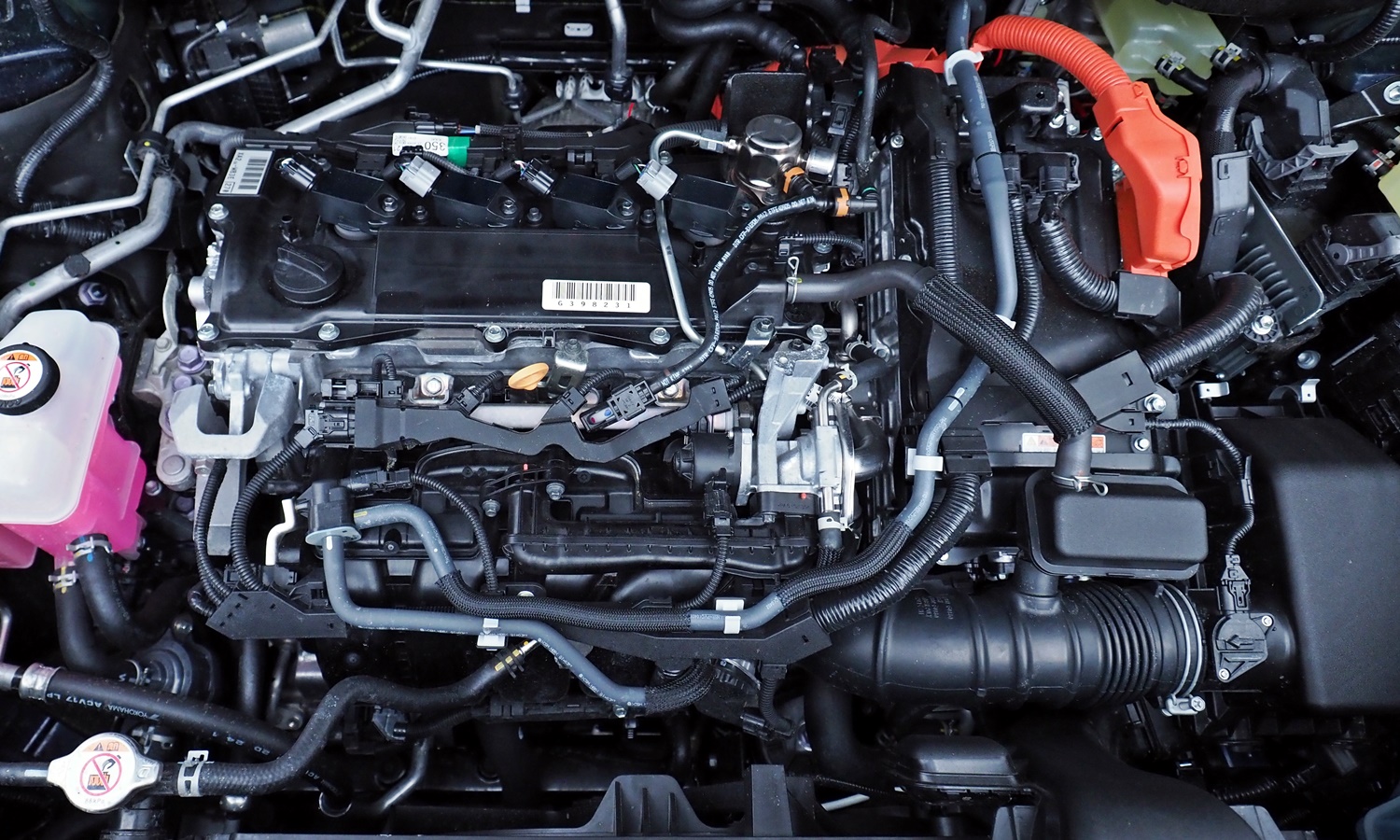 Four-cylinder engine from Camry yields excellent mpg for a three-row crossover. Not sluggish. 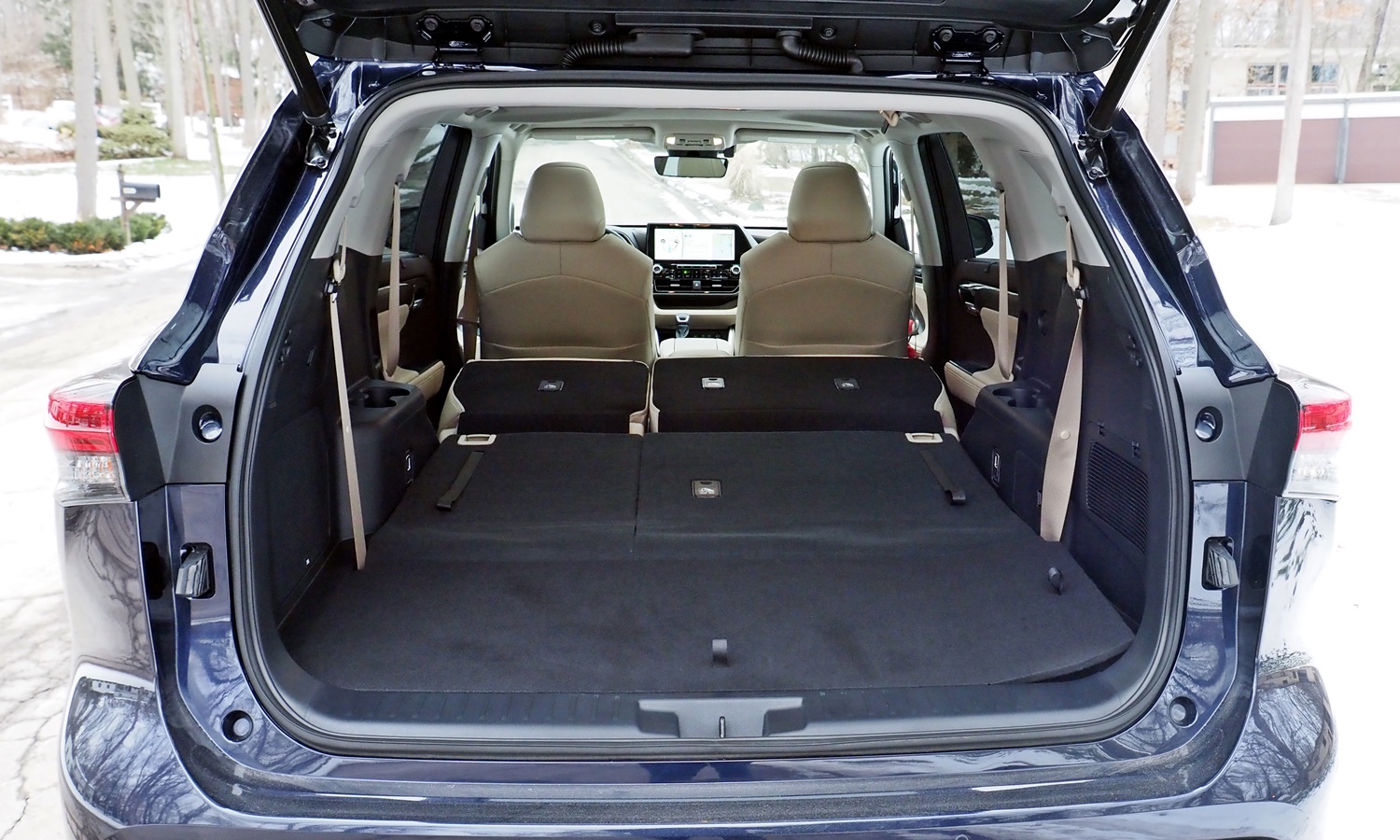 Toyota provided an insured car for a week with a tank of gas.

More About the Highlander 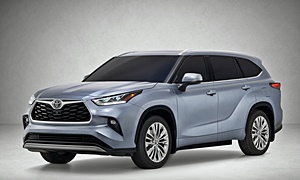 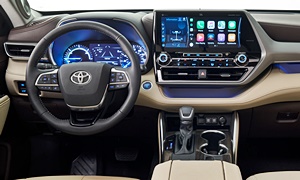