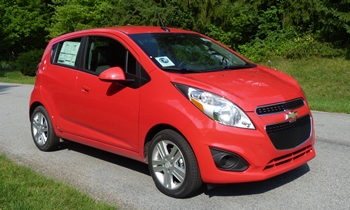 For decades, Detroit put little effort into its small cars, claiming that American car buyers didn't want them--or at least wouldn't pay enough for them to make them profitable. My, how times have changed. The smallest four-door car you can buy in the United States is now a Chevrolet. But is the Spark a car many Americans are likely to want? Or was old Detroit right?

Not beautiful or even cute, but not boring, either. more Spark photos 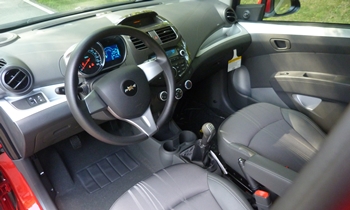 A lot of hard plastic, but solid and avoids seeming cheap (if barely).

The first "why" for the Chevrolet Spark is a gimme. The $12,995 price might not seem crazy cheap, as Hyundai and Nissan have offered $9,995 specials in the recent past. But that price didn't include destination, air conditioning, or power windows. The Spark's base price includes all three, along with alloy wheels and ten airbags. Add $925 for an automatic transmission. Adjust for content differences using TrueDelta's car price comparison tool, and the 2013 Nissan Versa's $225 price advantage becomes a $2,600 value disadvantage. Other subcompacts, including Chevrolet's own Sonic, are similarly well over $2,000 more than the Spark once feature differences are adjusted for. Among cars available in the United States, the Spark is easily the least expensive with a livable level of content, and without seeming cheap or flimsy.

Small, light cars can be very fun to drive. The Spark isn't. Instead, like many previous small cars from GM it drives like a larger car, with less tippy handling and a smoother ride than other tall cars with short wheelbases. Those who'd rather have a large car will appreciate this. But why don't these people simply get a larger car? Well, aside from its low price the Spark's small size should make it a good fit for urban driving. At 144.7 x 62.9 x 61.0 inches the smallest Chevy is 14 inches shorter and five inches narrower than a Sonic, but a little taller. Parking spaces and holes in dense traffic too tight for nearly every other car will work for this one. 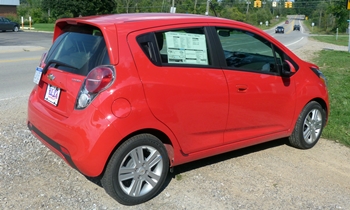 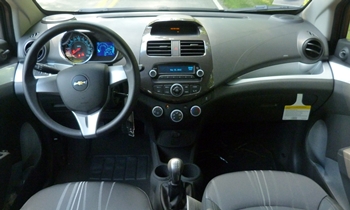 The Spark's designers didn't attempt beautiful or even cute. But they did pretty well given the car's ungainly proportions, and avoided creating an utterly forgettable appliance. There's some visual fun, but only thanks to color choices that include a lime green and "techno pink."

The Spark's EPA highway rating of 38 mpg isn't bad, but many much heavier, much more powerful cars do as well. An EPA city rating of 32 mpg is more impressive.

The Spark only weighs 2,300 pounds, but its engine, an 84 horsepower 1.2-liter four-cylinder, is among the least powerful in a U.S.-market car. With the five-speed manual transmission (I haven't driven one with the four-speed automatic) it gets around okay at sub-highway speeds, and usually avoids feeling strained or sluggish. But it never feels energetic, either. As with the chassis, GM's engineers seem to have focused on providing adequate performance, not anything resembling fun.

The Spark's beltline dips dramatically as it approaches the mirrors, and there wasn’t enough space for designers to get swoopy with the A-pillars, so visibility to the front quarters is good. But as in the Toyota Yaris the base of the windshield is considerably higher than that of the front windows. To provide a greater sense of safety? I felt the need to raise the seat to see over the instrument panel, at which point the windshield header intruded. 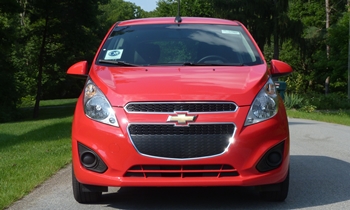 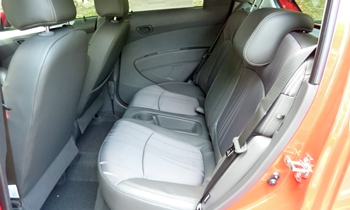 More space than in some much larger cars.

Around town, the Spark is peppy enough, smooth enough, and quiet enough. But at highway speeds the "enoughs" go away. Engine, road, and wind noise all get considerably louder, and the ride gets bouncier.

Given the compact exterior and adult-worthy rear seat, it should come as no surprise that there's scant space for cargo inside the Spark--11.4 cubic feet, to be precise. If you have more than one suitcase or a few grocery bags, it's time to fold the rear seat.

The Spark isn't the best car for the Great American Road Trip. But for urbanites who don't use a car often and who have trouble finding a parking space when they do, or for others seeking occasional basic transportation (college students, retirees), it could make a lot of sense, with better build quality, room, and performance than its price and size suggest. Apparently, GM can make a viable tiny car. All they needed was a Korean branch to develop and manufacture it! 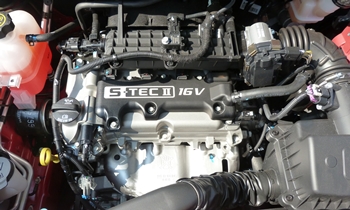 84 horsepower to move 2,300 pounds. Does the job better than the specs suggest, but not much better. 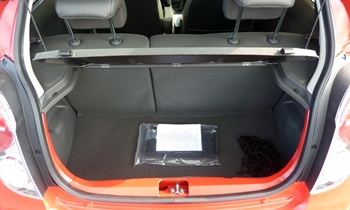 More About the Spark 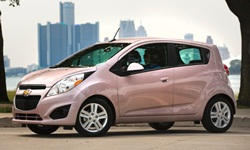 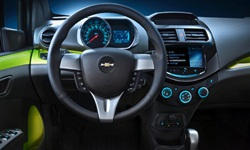