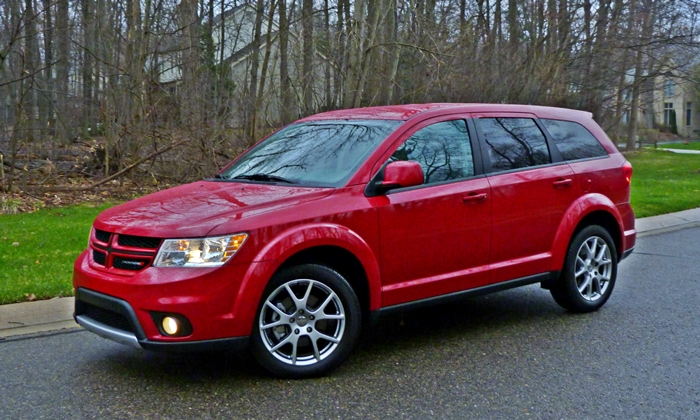 The 2009 Dodge Journey was developed during a period when Chrysler did little right. Later, heading into and then emerging from bankruptcy, the company rushed to change what it could. Some major weaknesses could not be rectified. To compensate, Chrysler sought to out-do competitors in other areas. For 2013, these other areas include handling, via more aggressive suspension tuning for the enthusiast-oriented Journey R/T. Always on the lookout for a family hauler that’s fun to drive, I checked one out for a week. 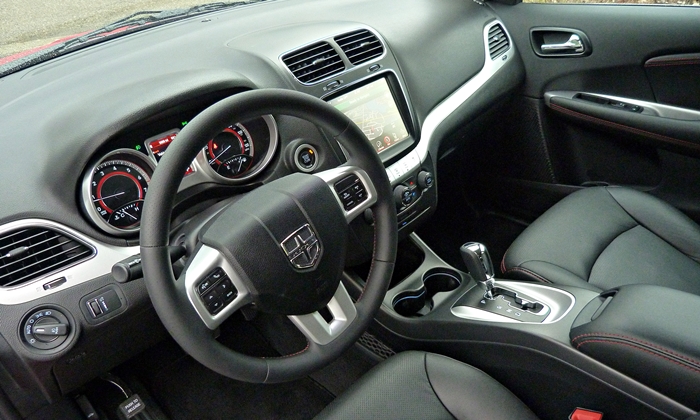 Some good materials, others not so good. Red stitching a nice touch.

When all else fails, cut the price. The Journey has some strengths, but reflecting the vehicle’s fundamental weaknesses you cannot buy any other crossover this size (113.8-inch wheelbase, 192.4-inch length, 72.2-inch width, 66.6-inch height) for the Dodge’s price. With V6 engine, all-wheel-drive (AWD), heated leather, nav, and sunroof, the Dodge Journey R/T lists for $33,070. (The Crew is even less, $32,215. Adjust for the roof rack not on the R/T, and you’re paying $855 for the sporty bits.) A similarly equipped GMC Terrain SLT lists for $1,000 more than the R/T and the Hyundai Santa Fe Sport 2.0T lists for $2,000 more. Adjust for feature differences, and the Dodge’s advantage grows to $1,600 in the former case but shrinks to nothing in the latter (the Hyundai includes quite a few more bells and whistles).

And these vehicles aren’t really the Journey’s size, at least not on the outside (we’ll get to the inside). The Dodge is considerably longer than it appears, specifically five inches longer than the Terrain and eight inches longer than the Hyundai. They don’t offer a third-row seat. One is optional on the Journey. Add this seat and compare the Dodge Journey R/T to the Hyundai Santa Fe (sans-Sport) Limited, and it lists for $3,865 less ($34,730 vs. $38,595). Adjusting for feature differences reduces the gap to about $1,600.

Scratch the "capacity and towing," and substitute "versatility." For a 192.4-inch-long vehicle, the Dodge Journey cannot hold much stuff, 67.6 cubic feet with the rear seats folded vs. 71.5 in the Santa Fe Sport and 80.0 in the Santa Fe. Part of the problem is a somewhat narrow body (the Hyundai is a couple inches wider), but mostly the Dodge just wasn’t packaged efficiently. Opt for the third-row seat, and only ten cubes will fit behind it (e.g. a single row of grocery bags).

Versatility is another matter. Quite a few manufacturers experimented with folding front passenger seats back in the 2000s. Most have since dropped the feature. The Journey still has it. As if this weren’t enough, a storage compartment is hidden beneath a flip-up passenger seat cushion, and a couple more storage compartments reside beneath the second-row floor mats. Add in good-sized cubbies in the conventional locations, and if you cannot properly stow all of your knickknacks inside the Journey…well, you’re a candidate for Hoarders. 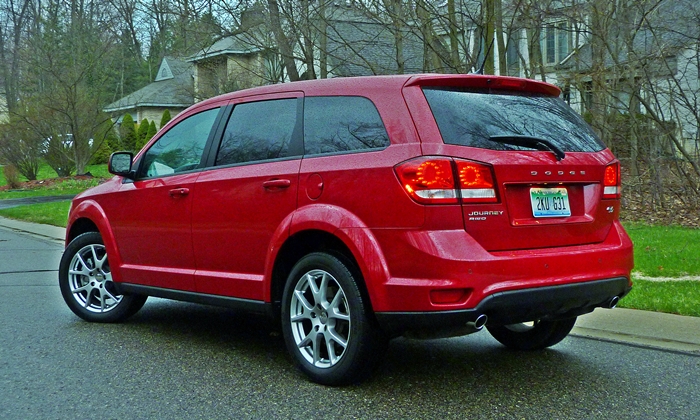 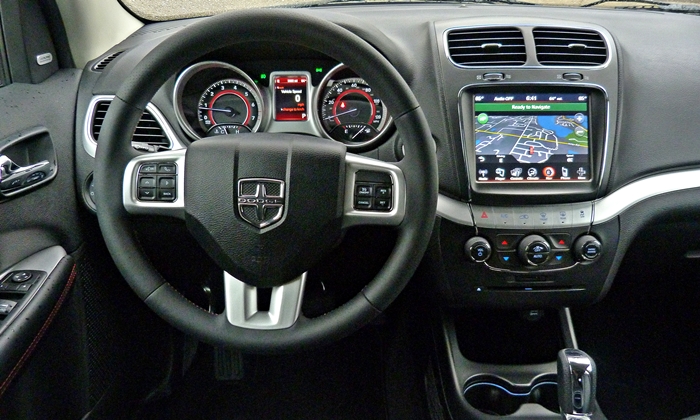 Exemplary controls. But the buttons feel cheap and the shifter feels clunky.

Overly firm, insufficiently contoured front seats seem to be popping up everywhere lately, even in the formerly fluffy Toyota Avalon. (Blame the influence of the Germans.) The Dodge Journey’s front buckets provide a refreshing alternative, with a rare combination of cushiness and support. The armrests and door pulls are also well-padded. The driver-side lumbar powers up and down as well as in and out. The headrests even adjust fore-aft, a rarity among sub-luxury cars these days. If only the driver seat also included power recline...

You might have noticed that handling didn’t lead the reasons to buy a Dodge Journey R/T. Well, despite the new, firmer tuning, I wavered on whether to include handling in the list at all. Lean is down and composure is up. Both are about as good as you’ll find in this sort of vehicle, quite an achievement given the Journey’s Dodge Avenger / Chrysler 200 basis.

But is the Journey fun to drive? Even with a plenty quick 283-horsepower V6, not really. Though it’s fairly narrow, the Journey doesn’t feel agile. The Santa Fe feels less hefty, partly because it is (4,098 vs. 4,195 lbs.). And that’s the three-row Hyundai. The two-row Sport is nearly a quarter-ton lighter than the Dodge.

Beyond this mass, the Journey’s steering isn’t as solidly weighted or as communicative as the rack in the company’s minivans. Instead, it feels somewhat slow and vague, especially on center. Perhaps Chrysler had people like my wife in its focus groups. Gayla really liked how the Journey drove, and she tends to dislike crossovers. Credit easy steering, the compact width, and a driving position considerably more car-like than the average crossover’s (though the instrument panel is deep and the forward pillars are thick).

The R/T’s firmer suspension doesn’t ride as smoothly as the regular Journey’s. It’s still plenty comfortable for my taste, and quiet. But if you’re willing to trade handling for a more plush ride, get the Crew (and save $600).

With large, well-organized virtual buttons, intuitive navigation, and quick responses, the Dodge’s uconnect touchscreen control interface is often acknowledged to be the best of the bunch. Plus you don’t have to use it for key functions if you don’t want to. Large, well-organized, easy-to-reach actual buttons occupy the space below the screen.

As mentioned earlier, Chrysler really dropped the ball when it packaged the Journey. The second-row seat is a comfortable height off the floor, yet headroom is plentiful even by crossover standards. But that’s the beginning and end of the back seat’s virtues. The optional third-row seat is kids-only (unless the adults in question aren’t much larger than kids). Though less than an inch longer, and riding on a wheelbase that’s 3.6 inches shorter, the new 2013 Hyundai Santa Fe has eight more inches of legroom in each of the rear rows—a huge difference. Adults can fit in the Journey’s second row if it’s slide back at least half way along its travel, but they can’t stretch out like they can in the Santa Fe. Or in many compact crossovers, for that matter.
Poor packaging also makes for a fairly high load floor and (as mentioned above) less cargo volume than in other similarly-dimensioned crossovers.

The 2011 quick-fix refresh vastly upgraded the Dodge Journey’s interior. The materials used on the instrument panel, doors, and seats are among the best in the segment. The R/T includes red stitching to kick the visuals up another notch. Sadly, the buttons and switches weren’t similarly upgraded, and now rank among the cheapest-feeling in the class (though the Terrain's aren't much better). 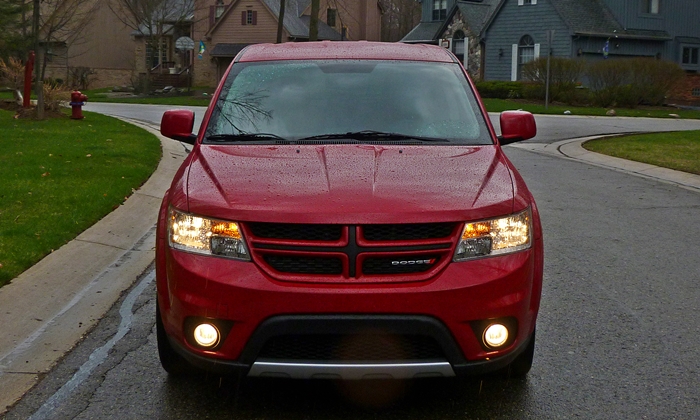 Aggressive face, especially in red, yet restrained by current standards. 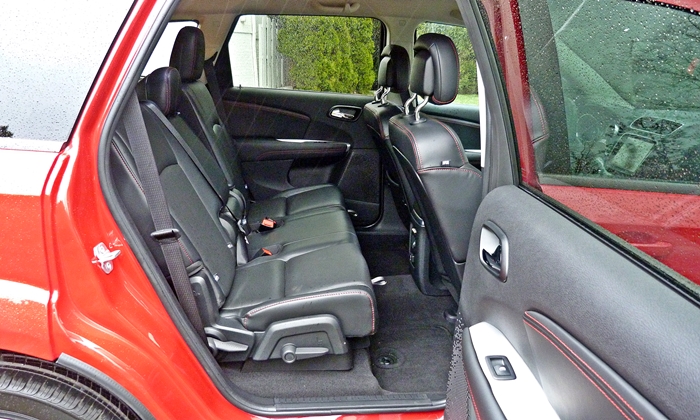 Rear seat a good height off the floor, but surprisingly little legroom.

I’ve already noted the lack of a power recliner for the driver seat. You can get a standard sunroof, but not a panoramic one as in the Hyundai. The front passenger seat can perform two tricks, but these preclude any power adjustments. Second-row passengers only get A/C vents with the optional third row. Those seeking the latest safety nannies will also be disappointed. A rearview camera and rear obstacle detection are included with the nav, but that’s all you can get. Blind spot, land departure, and forward collision warnings won’t be available prior to a FIAT-based replacement. Finally, you'll have to open and close the liftgate manually (which I personally prefer anyway). Power isn't an option.

With a quick, cheap fix, the sheet metal isn’t changing. So the 2013 Journey retains the 2009’s boxy, somewhat wagon-like shape. But they have dressed it up nicely in R/T trim, with a tastefully aggressive front fascia and 19-inch alloy wheels that wouldn’t look out of place on an Audi. I love these wheels. Despite their generous size there’s quite a bit of air around them in the wheel openings. Did they consider lowering the R/T an inch (or more) when they crafted the new suspension?

The Dodge Journey R/T includes a number of thoughtful details, including sexy rims, cushy front seats, intelligently designed controls, and an abundance of storage compartments. It’s not quite fun, but it comes as close as any vehicle in its class. Unfortunately, Chrysler couldn’t alter the Journey’s fundamentally flawed packaging without spending real money (which it didn’t have at the time), so rear seat legroom is in short supply and cargo volume is marginal. Do the pros outweigh this big con? Judging by sales, for most people, no. For me, the handling and especially the steering would have to be better. As it is, there’s not enough fun to be had to compensate for the lack of space (my three kids are growing). But if you don’t need more space and like the nifty features, then perhaps the competitive price can tip a Journey into your garage. 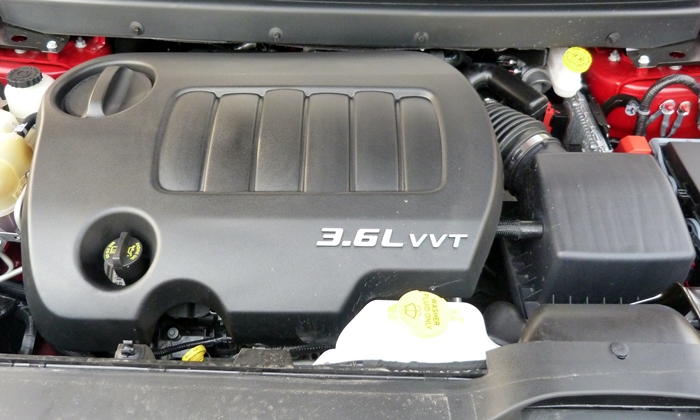 At 283 horsepower, the 3.6-liter DOHC V6 is strong but no longer the strongest in the class. 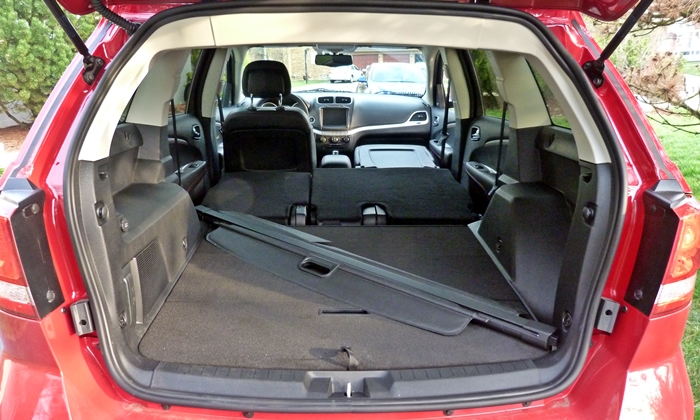 High floor, but can extend the cargo area all the way forward on the passenger side.

Dodge provided an insured vehicle with a tank of gas for a week.

More About the Journey 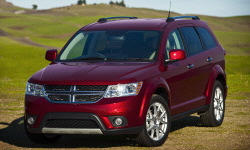 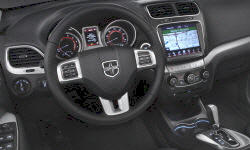