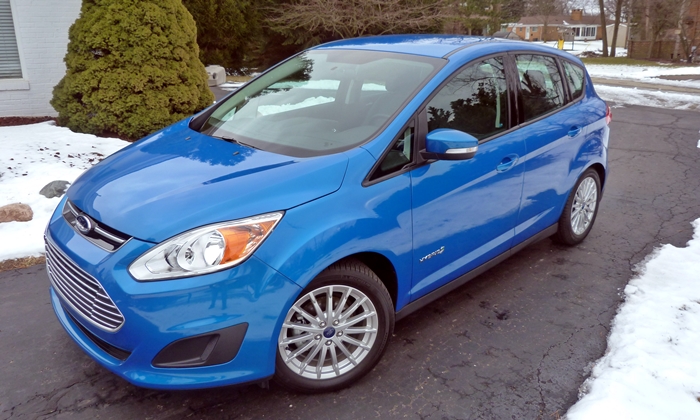 Sorry, I dropped the ball. With three kids, I wanted to see the seven-seat Ford C-MAX here. But at the last minute Ford decided to offer the Focus-based MPV only as a less functional, less attractive five-seater, and only as a hybrid (replacing the Escape Hybrid). This didn't sound like a recipe for success, so I didn't bother borrowing one from a dealer when they arrived months ago. But Ford finally sent one to review, and I belatedly discovered that the C-MAX greatly exceeds my expectations.

Looks good to you? Then don't mind my opinion. more C-MAX photos 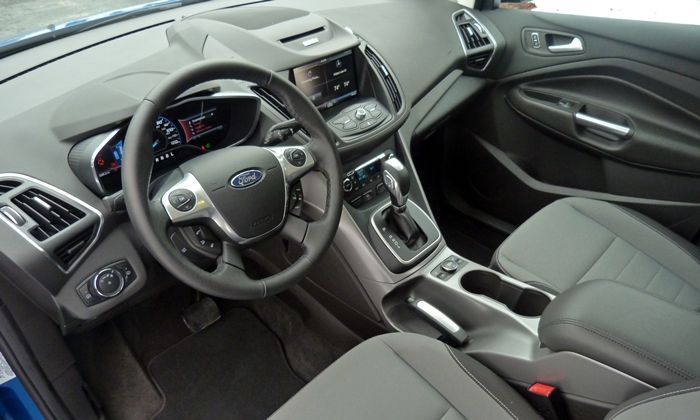 Very similar to that in the new Ford Escape. Available only in this color combo.

The Ford C-MAX's fuel economy is at once the #1 reason most people will buy a C-MAX, but also the model's greatest shortfall. The EPA ratings are an impressive 47 mpg city, 47 highway. In real suburban driving we (and many owners) observed trip computer averages of 33 to 40, with an overall average of 35.8. Go easy on the gas and initiate braking early enough to fully recoup kinetic energy, and low to mid 40s can happen. But 47 is a stretch.

There are two ways to look at this. On the one hand, the C-MAX isn't coming close to its EPA ratings. Odds are Ford will have to make an adjustment and credit past buyers for the difference, Hyundai-Kia style. (Which actually might be a reason to buy one before this happens.) On the other hand, even 36 mpg is about 8-12 miles-per-gallon better than similarly functional non-hybrid vehicles, including the related Ford Escape.

Efficiency is supported by excellent, highly configurable instrumentation. I personally opted to view a tach (rare in a hybrid), driving style ratings, and average mpg. A "brake coach" lets you know after each stop what percentage of kinetic energy was regenerated. In hybrids, this has a large impact on mpg than how hard you accelerate (more on this below).

The C-MAX is also offered as an "Energi" Plug-in Hybrid rated to cruise 21 miles on electricity alone.

We drove a Ford Fusion with a 240-horsepower turbocharged engine the week before we tested the C-MAX. A big surprise: I enjoyed driving the C-MAX much more than I enjoyed driving the Fusion. Push the hybrid MPV hard, and it has more roll and lower limits than the sedan. But in typical suburban driving the C-MAX feels solid, precise, and highly responsive. Apparently, the chassis of the Focus is so good that even adding 700 pounds (for a portly total over 3,600) and six inches of height (for a nearly SUV-like 63.9) can't kill the joy. It probably helps that the C-MAX isn't quite as tall as the typical compact crossover. A Prius isn't nearly as fun to drive. I don't often miss driving the cars I test. I miss the C-MAX. 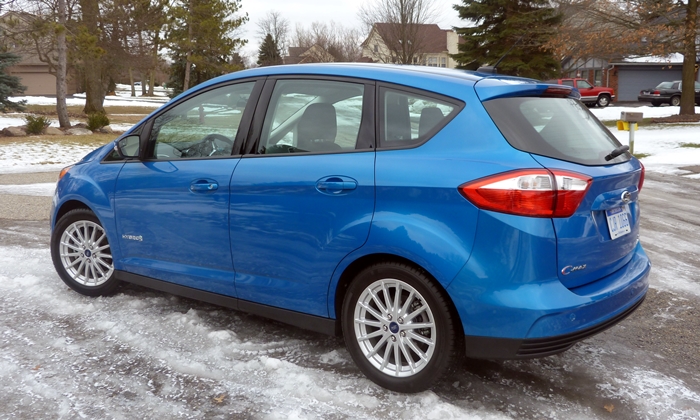 Okay, maybe it's not ugly. But form certainly doesn't deviate much from function. 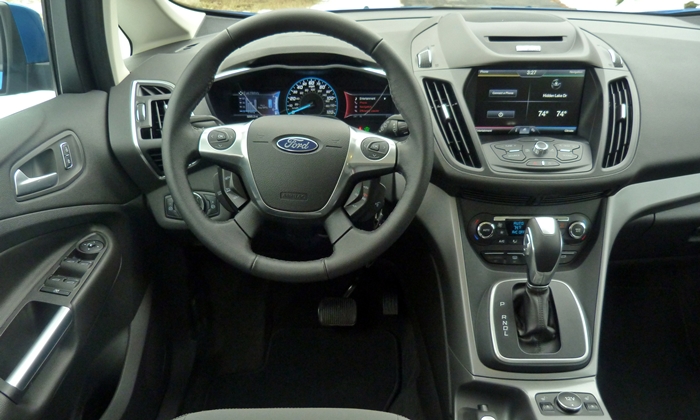 A little busy, but I like the look. Many padded surfaces, quality ambiance.

The C-MAX's driving position is part of why it is so fun and easy to drive. You sit much higher than in a typical car, and the view forward is wide open. The instrument panel is about as deep as that of the related Escape compact crossover, but somehow I minded this less. Controls are all within easy reach, and most are easy to understand and use. (Some aspects of MyFord Touch remain a PITA, most notably the need to tap some "buttons" at the bottom, where they're hard to reach because the screen is recessed.) If I could include a sixth "why," it would likely be the supportive, very comfortable front seats.

The C-MAX shares its powertrain with the Fusion Hybrid. Compared to the previous-generation Ford hybrids, the new ones have smaller gasoline engines but more powerful electric motors. A combined output of 188 horsepower isn't much for a 3,640-pound vehicle, but this doesn't consider the instant, low-end torque provided by the relatively large electric motor. In real-world driving, this torque makes the C-MAX feel much more energetic than the specs suggest. Unlike a Prius, it never feels sluggish. The big motor also enables electric-only operation as high as 62 miles-per-hour.

Transitions between the two power sources are nearly seamless. Partly because engine noise is well-suppressed, it's not obvious when the gas engine cuts in and out. It also doesn't hurt that the well-programmed planetary gearset-based CVT is much more responsive than Ford's six-speed automatic transmission.

Unlike in the Prius, you can't choose between multiple power modes in the C-MAX. You're essentially in "power" mode all the time.

The C-MAX also happens to be much nicer inside than a Prius. Though no luxury car, as in the Focus and Escape nearly everything looks and feels solid and of high quality. Even the cargo area shade it over-engineered in a manner typical of German cars but previously rare in domestic ones. This is partly because the C-MAX was developed for the European market, which historically has had much higher standards for compact cars. Though the tires clomp a bit over bumps, in general noise levels are premium car low, and the noise that does get through further suggests a car of high quality.

Considering this premium character and the hybrid powertrain, the Ford C-MAX's $25,995 seems very reasonable. Adjust for feature differences and the C-MAX costs about the same as a regular Prius and about $2,000 less than a Prius v, while splitting the difference between them in interior space. Add heated seats, MyFord Touch with nav, a power liftgate, and a reverse sensing system, as in the tested car, and the price increases to $28,580. A leather-trimmed SEL is also offered, but the cloth is attractive and comfortable.

We now come to the main reason I initially discounted the Ford C-MAX: it's less attractive than the seven-seater we didn't get. Put more bluntly, it's oddly proportioned, fairly plain, and, to my eyes at least, simply unattractive. For this sort of vehicle, why not do something more fun, like the Kia Soul? But, judging from Prius sales vs. those of other hybrids, people expect a hybrid to be oddly proportioned and to look different than conventional cars. Does Ford's strategy of only offering the C-MAX as a hybrid five-seater brilliantly turn an aesthetic lemon into lemonade?

The C-MAX's capable, enjoyable handling doesn't just happen, especially not with such a tall vehicle. The Ford's suspension is Euro-firm. While I personally enjoy a tightly damped suspension, some people might mind that it can feel choppy, even a little jostling over patchy roads. Large bumps are absorbed well. 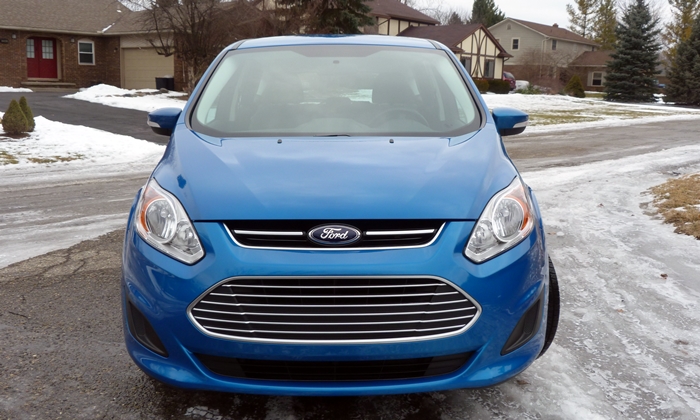 My least favorite angle. Why is the upper grille opening necessary? It doesn't look good. 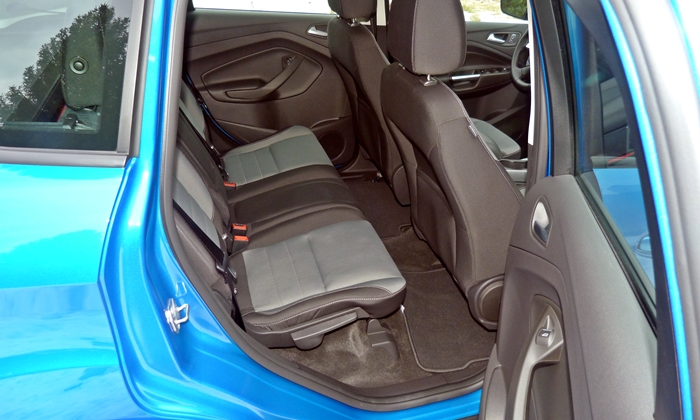 Plenty of room, but too low.

Thanks to the hybrid bits, the C-MAX's cargo floor is a couple inches higher than it would have been with a conventional engine. Cargo volume is 24.5 cubic feet with the rear seat up, and 52.6 with it folded to form a flat floor. The figures for a Prius: 21.6 and 39.6. For a Prius v, which is similar to the average compact crossover: 34.3, 67.3. So the C-MAX has more room for stuff than a Prius or compact hatchback, but isn't quite competitive with a Prius v or compact crossover.

There's plenty of space for adults in the back seat of the C-MAX. But the seat is mounted too low to provide thigh support, and between this and the angle of the floor I could find no comfortable way to position my legs and feet. There's a huge amount of headroom, so this was not the limiting factor. Instead, the seat seems to be so low to enable a flat floor when it is folded without requiring that the seat bottom be folded separately from the seat back. Combine the low seat with a high beltline (bottom of the side windows), and children can't see out well.

I have nothing against the tested car's "blue candy metallic tint" paint. Well, except that it's a $395 option I personally wouldn't spend the money for. The interior, on the other hand, is offered only in the black and gray of the tested car. Not bad if you like this combo. But some people will wish for lighter shades or even some color.

As a hybrid that is functional and surprisingly fun-to-drive, the C-MAX is far more compelling than I initially expected it to be. Real-world fuel economy is well below the EPA ratings and below a Prius, but performance, handling, and build quality compensate. I still wish the C-MAX looked better, but a Prius isn't much prettier, and a Prius v is even less attractive. Maybe if the C-MAX Hybrid sells well Ford will belatedly offer the seven-seater? 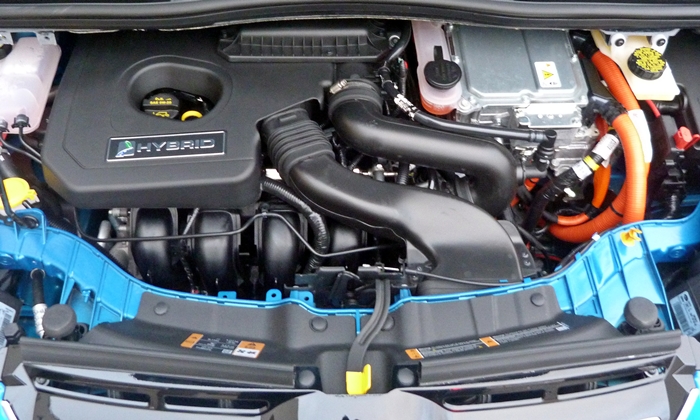 Feels much stronger than the powertrain in a Prius. But mpg well below EPA ratings. 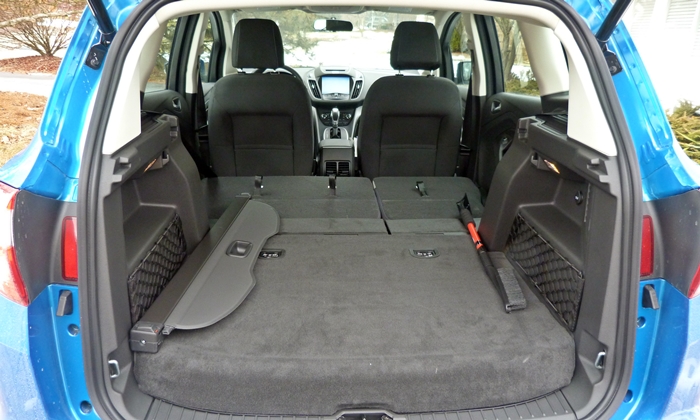 Ford provided an insured car with a tank of gas.

More About the C-MAX 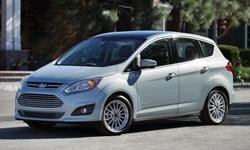 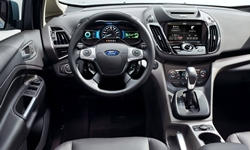