2013 Ford Focus Pros and Cons at TrueDelta: the Focus ST is a real do-it-all American car. by dovecom

In a market segment that has, until now, suffered through value only product lines, the Focus lineup brings upscale features to US economy cars. With the ST, not only does it match other hot-hatches with performance, it matches larger sport sedans with its balanced handling and low-end torque.

Have never managed to achieve the posted fuel economy average for this car (26), even with extremely careful driving,70% highway. Driving it hard nets only a few mpg worse than hypermile type driving.

Slightly better front styling than other Focus models with better grill design and insert. Side skirts add a little sportiness as does slightly larger rear spoiler. Best feature of the ST though is the rear styling. Reminiscent of some Porsche models. Much more aggressive but not over-wrought styling of lower third.

Partial leather seating looks amazing. Sporty color inserts draw attention without out being overly flashy. Leather on major wear areas with cloth for better comfort, especially in hot weather. Cloth also offers better grip, though large seat bolsters take care of that as well. Don't imagine these seats would be comfortable for very large or overweight occupants. Rear seats are 60/40 split folding like other hatchback Focus models, but in the ST, the rear bench also folds to allow even flatter rear cargo area. No ambient lighting in the ST2. Did not think I would miss it, but having had it in a MkIII Focus SEL, I do miss it,especially in the foot wells.

Ford should have offered more metallic paint options. This car in silver looks the worst. Somehow all the styling cues disappear in silver. Tangerine Scream (or as i call it, School Bus Yellow) is the most aggressive color by far. Ford's red lacks punch (needs metallic!). Ford's signature blue looks good on this car as do black and white. The bright green of the Fiesta might have looked cool also. For best presence and safety we chose the yellow, even with the up-charge it was worth it.

It's not the added horsepower over the other Focus models that is most impressive. The immense torque, from quite low rpm (2000) is what sets this hot hatch apart. It makes the car so easy to drive as a daily driver. You don't have to constantly shift to have useful power. It's almost always there. Turbo lag is brief, and full power is decent, but not extraordinary. In fact it feels like it's out of breath by about 6000 rpm. I'm sure some aftermarket tuning will help bump up the top end, but don't alter the car's performance to the detriment of all that torque. It's really the main character in this drive train's story.

It's relatively easy in the other Focus models to average low to mid 30's for economy. This matches the EPA estimates. But the ST struggles to achieve anything close to EPA estimates in the real world. Mileage is more like a minivan than a small sedan. They should have included better engine management (like stop/start) or even separate fuel maps for economy and Sport modes.

Tires are great, but cannot be used below 40F. Dealers need to be more aware of this at point of sale.

Ambient lighting is only available on the highest option package. Same with front HID lights. Both offer additional safety and should have been offered as separate options for all packages. Regardless of options, the lack of light in both the glove compartment and arm-rest console are serious missteps. It's very frustrating to try finding anything in either place at night. The center cup holders are too loose to be much use, but at least they gain lighting with the ambient package. 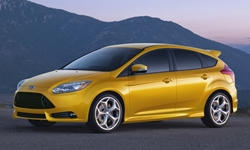 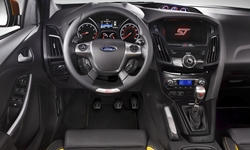