When Ford gets it right, they really get it right. The 1st generation Ford Focus has to be one of the best in it's class, yet it's terribly underrated. I would suggest that if you can find a Focus with the same mileage as a Civic or Corolla to give it some serious thought.
rn
rnI would buy another one if we were looking for a new car.

This is an exit review as we just sold this car. I'm actually sad to see it gone, but it's my wife's car and she wanted a new car after eight years. It was a 2005 ZX5 5-door hatchback, combining best-in-class handling with good looks, a snappy drive-train and good fuel economy. In eight years it had two "major" repairs (hatchback wiring harness and heater fan resistor were both replaced under warranty). We purchased a fully loaded model with every option available except the automatic transmission, and it returned stellar mileage (although my wife never liked taking it over 3000 RPM, which would explain the 27-28 MPG she usually returned in mixed driving). It was loud on the highway until I replaced the factory Pirelli P6's with taller profile Michelin summer tires, which made the cabin much quieter, other than for wind noise, which was acceptable for it's class.

This car was equipped with the 5 speed manual transmission, which contributed to the excellent mileage, and was definitely more fun to drive. It had way more than adequate power to merge at freeway speeds and to pass on single lane highways, yet returned 40 MPG at steady 70 MPH speeds. It still had the original clutch, front pads & rotors and rear drums. We did replace the battery after 5 years though. All fluids were regularly changed (including the coolant and transaxle oil) with Ford recommended synthetics; the engine was still so quiet that you couldn't hear it purring from 10 feet away! Kudos to Ford for one of the best and slickest shifters I've ever used. I actually prefer it to the several performance sticks I've driven, and I would add that the clutch, whilst not BMW level quality, was better than any small import I've ever driven, including a Honda clutch.

There are only three reasons why I would hesitate to recommend a used 2001 - 2007 Focus, and two of them are just picking nits. First reason, the side mirrors are two sizes too small. For what was a $23,000 car in 2005, the side mirrors speak to the decontenting in this class of car. I would have been happy for a trade-off of an extra $100(?) for better and larger mirrors. My other nit to pick was the heater fan - at maximum it sounded like a F4 Phantom was taking off inside the cabin. My only major complaint with the Focus is the appearance of rust. Throughout the model run the Focus ZX3 and ZX5 rusted in the same places - under the trim piece on the hatchback and the rear bottom corner of the rear passenger door frame. I regularly detailed the car, and the interior was absolutely mint, but even after giving up and having the hatchback professionally repaired, the rust had taken root. 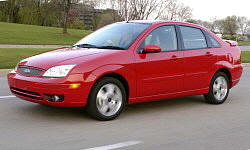 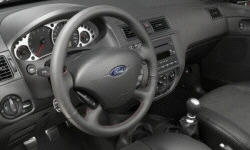