2016 Ford Focus Pros and Cons at TrueDelta: A Near-Perfect Jekyll and Hyde Daily Driver by misternoisy

The current Ford Focus in ST trim may be one of the most entertaining reasonable daily driver cars currently extant. Laser-accurate (if somewhat numb) steering, a near-perfect ride/handling balance and its complete willingness to hang the tail out when you lift off make the ST a near-perfect 'Jekyll and Hyde' car. It's a comfortable commuter when you're just driving home after a long day at the office and a wild animal when you want to play.

Nothing upsets the chassis, even midcorner bumps that used to have my '14 Veloster Turbo skipping and hopping around corners. The only handling negatives are the enormous 40' turning circle (dictated by the upsized rubber and brakes in the ST model relative to its less performance-oriented siblings) and the omnipresent torque steer, though I regard the latter as part of the ST's charm. Yes, the Fiesta ST is sharper and more aggressive, but the FoST feels better suited to day-to-day driving, particularly if you're looking at long road trips. The current GTI is admittedly more mature, but the Focus splits the difference between the 'buttoned-down/grown-up' GTI and 'crazy kid' Fiesta ST just about perfectly for me.

The powertrain is perfectly suited to the ST's 'business or pleasure?' mission. During day to day driving, it's remarkably civilized - the light and forgiving clutch pairs with the fairly slick shifter to make stop-and-go traffic tolerable, while the easy low-RPM torque makes it easy to cut and thrust your way through the daily grind. Getting on it hard once you enter second gear is the gift that keeps on giving, delivering a solid kick in the pants and huge smiles as the steering wheel squirms under load.

Once you get away from traffic, it's easy to find a stretch of road and wind the eager 2.0 out. Torque is everywhere on the dial save for right at the top, and the engine makes all the right noises (even if some of them are piped in).

Materials and construction are top-notch for the class, with black matte-finished plastics accented by the occasional brushed aluminum brightwork dominating the cabin. None of the touch points are uncomfortably hard and the whole car feels very 'of a piece'. Doors close with a very European 'thunk' and there are no squeaks and rattles, even on the worst roads. Seating materials on the ST1/base spec are very rugged-feeling, with a combination of tough-looking woven synthetics in a contrasting black and grey pattern.

Admittedly, I only have about 1000 miles on the car so far, but as-delivered, it feels like a tank.

The Focus is very easy to get comfortable in, with a wide range of seat adjustments and a telescoping wheel teaming up to help you make the car fit you, even in 'base' ST1 form. The Recaros available on higher trim levels are very much a make or break proposition - my dealership had to search high and low for a ST1 car simply because the Recaros were far too uncomfortable for what would be my next daily driver.

The typical driving position in the Focus is somewhat upright for a car with sporting pretensions, though this pays huge dividends when driving for longer distances - it's very easy to drive the tank almost dry without a break.

Visibility out is about average for modern cars, though the Focus has a lower beltline (at least up front) than many of my previous cars. That said, as in most new cars the A-pillars are huge compared to the cars of our youth, the hood drops away from a somewhat high cowl too fast to see its corners from the driver's seat and the B-pillar is right in your way for passing maneuver shoulder checks. A rearview camera and blind-spot mirrors help somewhat, but despite the lowish beltline and large greenhouse, the Focus hatch isn't exactly your greatest ally when it comes to situational awareness.

The only real downer in the SE and ST1 trims is the audio system. SYNC is actually quite adept at handling in-car phone interactions, reading texts and streaming audio/taking calls via Bluetooth without a hitch. That said, the base audio system is somewhat gutless - it's perfectly adequate for listening to podcasts/audiobooks and talk radio (and even most music) with the windows up, but if you're the kind of person that regularly likes to drive with the windows down and the volume up, your options are to upgrade to the ST2/3 trims or add your own components.

The Focus hatch is a handsome car - the 2015 facelift brought the model in line with the rest of the Ford family, and the change is appreciated - the '15/16 STs have much less of the 'gawping catfish face' that the '13/14 STs had and the front fascia is much cleaner overall.

The only downside to the new styling is that the ST is now a little harder to pick out of a crowd - it wears unique badging, wheels, fairly subtle bumpers/skirts and a two-slot wing hanging off of the hatch, but that may not be enough differentiation from non-ST cars for some.

Fuel economy is as expected for a fairly powerful turbo car - my own experience is that you'll better the EPA estimates with conservative driving, but only barely. If you're having fun with the boost, expect that mileage to crater accordingly. That said, the fuel tank is almost hilariously small - 12 gallons limits the Focus ST to right about 360 miles assuming the most favorable highway cruising conditions. 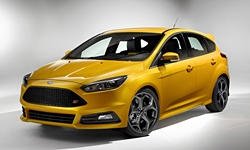 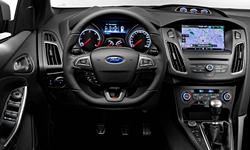