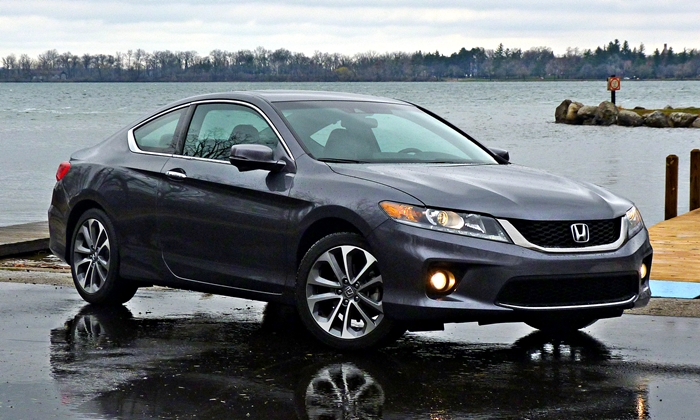 Way back in the twentieth century, many people (especially men) refused to buy a car with more than two doors. Virtually every high volume car model was available in coupe form. Fast forward to 2013, and coupes have largely become specialty models, when they are offered at all. If you happen to want a powerful front-wheel-drive coupe, you have exactly one choice: the Honda Accord EX-L V6.

Being the last of its kind, the Honda Accord Coupe V6 has no direct competitors. The Hyundai Genesis Coupe V6 comes closest. The two cars are similar in price, weight, and performance. But where the Accord's V6 powers its front wheels, the Genesis Coupe's powers the rears. Rear-wheel-drive is right-wheel-drive for many driving enthusiasts. So why buy the "wrong-wheel-drive" Accord Coupe?

Note: I've separately reviewed the Honda Accord EX-L sedan with the four-cylinder engine and CVT here.

No great beauty, but handsome and clearly a coupe. more Accord photos 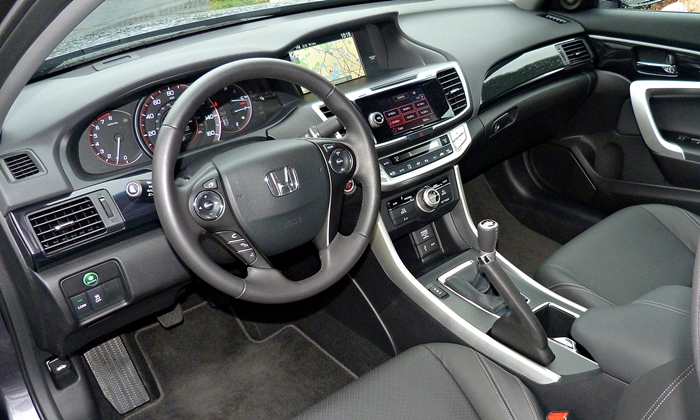 Inside as well the Accord takes few aesthetic risks. If you want different, get a Civic.

Year after year, the Honda Accord has proved a reliable car. Of the 16 model years covered by TrueDelta's Car Reliability Survey, all but one get a "happy face." In contrast, the Genesis Coupe had a rough start back in 2009, and in the past year has required a moderate number of repairs.

On paper, the Honda Accord Coupe's DOHC 3.5-liter V6 engine is down a sizable 70 horsepower, 278 vs. 348, compared to the Genesis Coupe's 3.8. Midrange power doesn't differ as much (peak torque ratings of 252 vs. 295 pound-feet), but the Hyundai's larger, direct-injected engine is clearly stronger. Both cars weigh about 3,400 pounds, and rear-wheel-drive has a low-speed traction advantage, so the Hyundai should be much quicker.

Of course, the same logic would make the Genesis Coupe with its base engine, a 274-horsepower turbocharged four-cylinder, about as quick as the Honda (5.9 seconds to 60, 14.4 for the quarter). But the less pleasurable sound and uneven power delivery of the four disqualify it as a close match.

The Honda Accord V6's performance quality easily compensates for its slight deficit in performance quantity. This V6 is among the best-sounding, smoothest-revving in the entire industry. You'll want to wind it out. The manual transmission, with a tighter, more precise, and simply better-feeling shifter than the Hyundai's, every snick from gear to gear a joy, is the perfect partner for this engine. 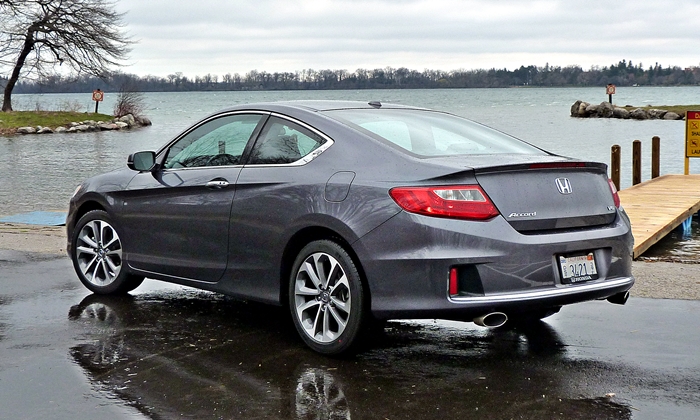 This end differs far more from the sedan. 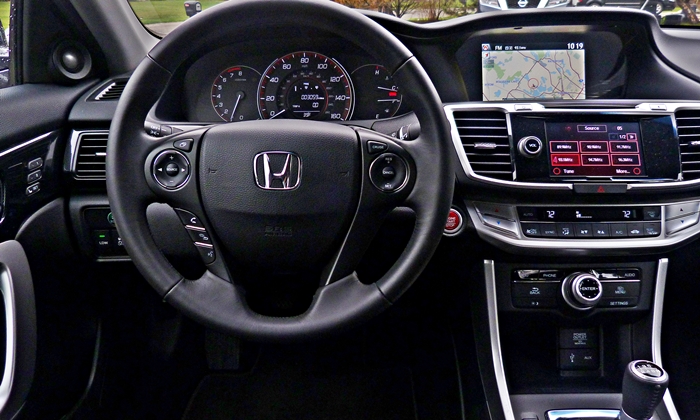 Compared to any midsize sedan, the Accord Coupe's rear seat is tight and difficult to get into and out of. At 5-9 I can sit behind myself, but with only an inch between my scalp and the rear window and about the same between my knees and the front seat back. The rear seat is only in the "whys" here because it's being compared to the rear seats in other coupes, including the Hyundai's, and these are even tighter.

Same story with cargo capacity. The Accord Coupe's 13.7 cubic-foot trunk would be marginally competitive in a midsize sedan, but it compares very well to those in other coupes. The Genesis Coupe checks in at 10.0.

Though not harsh, the Honda Accord Coupe's suspension is firmer than the sedan's and can get a bit jiggly on some roads. With its base suspension, the Genesis Coupe rides about as well. But fit the Genesis Coupe with its sport suspension and lower profile 19-inch performance tires (both mandatory with the V6 manual) and ride motions can become frantic enough to irritate. So, when comparing V6 manuals, the Accord Coupe's ride is more livable.

Coupes tend to suffer from limited rearward visibility, and the new Honda Accord Coupe is no exception. More and more cars (but not yet the Genesis Coupe) offer blind spot monitors. For the redesigned 2013 Accord, Honda developed an alternative: a camera that displays the view rearward along the right side of the car. Unlike most camera-based monitors, this one operates at any speed.

I found this feature especially helpful driving down a narrow road that leads to my house. In other cars I'm always worried about scraping a wheel or two on the curb (or the entire side of the car on a stone wall in front of one house). In the Accord I could easily check the distance to the curb and wall as I drove. This feature also helps when changing lanes on the highway.

The Accord Coupe EX-L also comes with lane departure warning and forward collision alert. While the former is, in my experience, of limited value, the latter can provide a helpful warning when traffic suddenly stops ahead of you. Neither feature is offered on the Genesis Coupe. On the other hand, the Genesis Coupe has xenon headlamps, which aren't offered on the Accord Coupe.

A final notable feature shouldn't be so notable. The Genesis Coupe should offer a power recline for its drivers seat, or at least a manual adjuster that's continually adjustable rather than ratcheting in steps. It does not. But the Accord has a power recliner, so you can fine tune the angle.

The driver seat in the Accord Coupe provides very good support. So I was especially disappointed that it was impossible for me to optimally position it. No matter how I adjusted the seat and steering wheel, I was either too low behind a fairly tall instrument panel, my elbow had nowhere good to rest, or the ginormous speedometer was partially obstructed.

More on that elbow rest: when I did position the seat low enough that my left elbow could reach the arm rest, said elbow ended up in a hard plastic door pull, with the inner edge of this door pull pressing against my ulnar nerve. How could Honda, a master of ergonomics, goof something so basic? I suspect a combination of working from the sedan instead of starting with a clean sheet, and testing the coupe less thoroughly than the sedan. With a higher driving position and differently positioned door pull, the sedan does not have this problem.

The Honda Accord Coupe V6 handles well...for a powerful, fairly large front-wheel-drive car. But there's a reason no one else still offers a powerful front-wheel-drive coupe: rear-wheel-drive provides much better traction exiting curves and enables the car to be rotated with the throttle. Even though its steering is heavier and no more communicative (neither system talks much), the Genesis Coupe's chassis feels more responsive and dynamic. In simpler terms, the rear-wheel-drive Hyundai is more fun to drive on a curvy road.

This assumes that said curvy road is dry. There's also a reason that every mass market midsize sedan relies on front-wheel-drive: it handles much more predictably and safely on slick roads. People who'll be depending on their coupe for year-round transportation where it snows could well prefer the Honda. The Infiniti G37 and competing German coupes offer even better traction with all-wheel-drive, but these cars are far more expensive than the Honda. 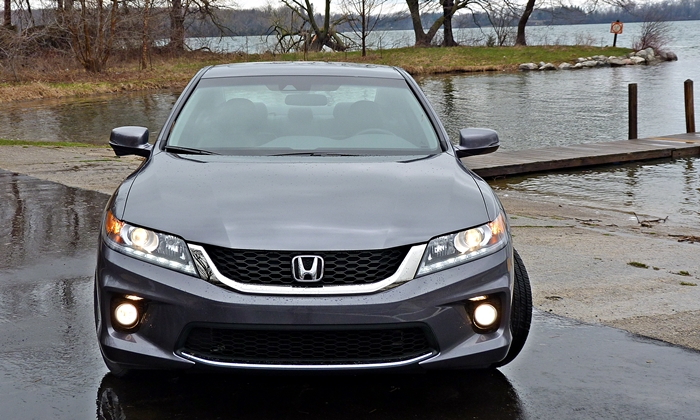 Clean and classy, if not highly distinctive. 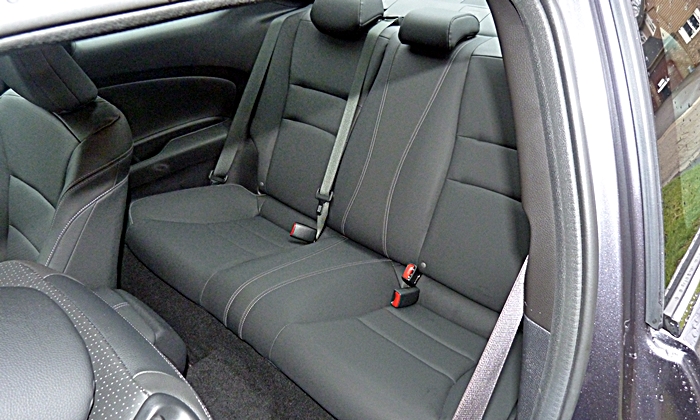 As already mentioned, the Honda Accord's speedometer is so large that it proved nearly impossible for me to properly adjust the steering wheel. Beyond this basic flaw, the infotainment system controls are not easy to use, with too many clicks required to get from place to place. Entering an address into the nav system requires an unusually large number of steps.

Some people used to buy cars with manual transmissions because of their superior fuel economy. The tables have turned in the past decade, and automatics now tend to be at least as efficient as manuals. Also, when paired with the manual transmission the Accord's V6 loses its fuel-saving cylinder-deactivation feature and spins faster in top gear. So while the V6 with automatic manages EPA ratings of 21 mpg city, 32 highway, the manual does much worse, just 18 city and 28 highway. The trip computer average was 21 for my week with the car (with a one mpg bump from some highway driving the last day). Not awful, but I've seen better from some larger, more powerful, all-wheel-drive cars. The Hyundai manages about the same, 18/27. People who buy either car with a manual transmission do so entirely because they're more involving and consequently more fun to drive.

By trimming a couple inches from the wheelbase and more aggressively raking the rear pillar, Honda crafted a coupe that looks considerably sportier than the related sedan. Yet, With its front-wheel-drive proportions (short distance between the front wheel and door) and sedan basis, the Accord Coupe doesn't look as sleek, athletic, or sexy as the Genesis Coupe. No one's going to mistake the Honda for a purpose-built sports coupe. The Genesis Coupe isn't without its own aesthetic issues, though. The dipping rear side window and new-for-2013 face, while certainly distinctive, are (at best) acquired tastes.

With the redesigned-for-2013 Accord Coupe, Honda delivers its typical stellar V6-mit-stick powertrain, but hasn't worked any miracles with the styling or handling. Both are solid efforts for a front-wheel-drive, sedan-based coupe, but can't match those of a purpose-built rear-wheel-drive 2+2. But the front-drive sedan basis also has benefits. Compared to the Hyundai Genesis Coupe, you get more room in the rear seat and trunk, a more livable ride, and safer handling on slick roads. Add in the model's legendary reliability, and perhaps the Accord Coupe, the last of its kind, will avoid the otherwise common fate of its class. 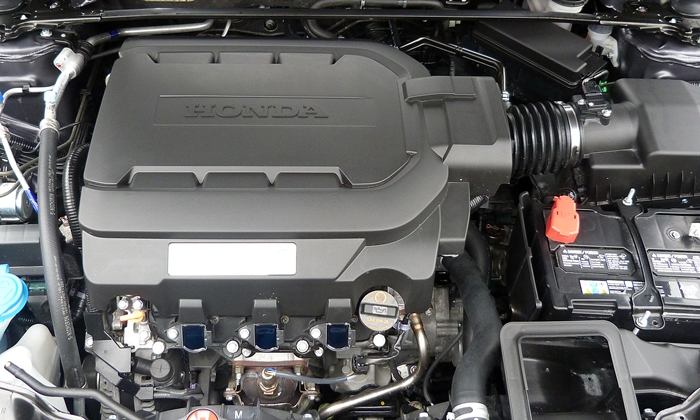 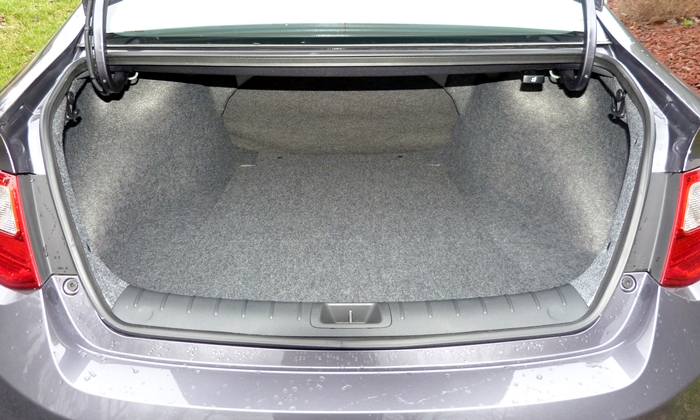 Marginal for a sedan, good for a coupe.

Honda provided an insured car with a tank of gas. I initially drove the Genesis Coupe V6 at a Hyundai event, then briefly refreshed my memory with the help of Shawn Slavin at Thayer Hyundai in Livonia, MI (734-744-2177).

More About the Accord 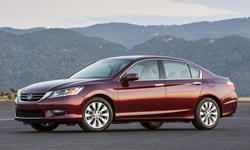 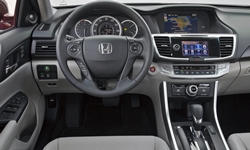