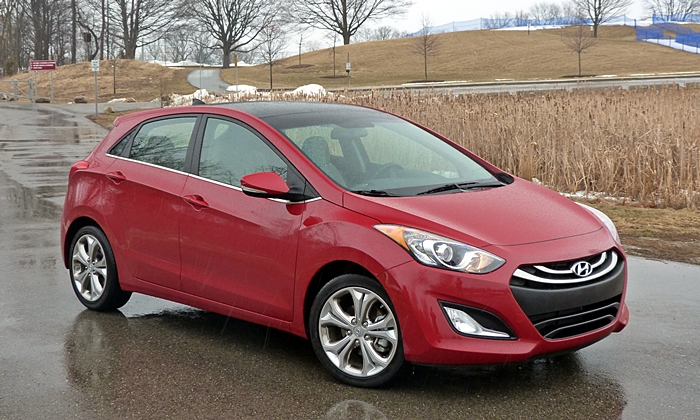 When I reviewed the then-new Hyundai Elantra GT last year, I found it good in more than a few ways but "much less thrilling than any car with a GT label ought to be." For 2014, Hyundai has replaced the 2013's 148-horsepower 1.8-liter four-cylinder engine with a 173-horsepower 2.0-liter. Is this enough of a bump to keep up with the redesigned Mazda3?

Elantra GT much more stylish than the Elantra Touring. Even dramatic. But is it beautiful? more Elantra GT photos

Quality look and feel inside. Tan (a bit washed out in the photos) a welcome option.

From the short list of reasons to buy the Elanta GT and the almost equally short list of reasons not to buy one you might (correctly) conclude that it's a generally good car that doesn't stand out as great or awful in many ways. Frankly, it's neither great nor awful in any way whatsoever, leaving me hard-pressed to fill these lists. Most categories end up in "other features."

The top spot goes to something not inherent in the car itself: Hyundai's famous warranty. It's 5/60 "bumper-to-bumper" (with exclusions in the fine print--read it) vs. most others' 3/36 plus 10/100 (original owner only) on the powertrain vs. the others' 5/60.

The Kia Forte has the same warranty as the Elantra GT, though.

Like the Elantra Touring which it replaced, the Elantra GT shares few if any visible parts with the Elantra coupe and sedan. Instead, both cars are essentially the European-market Hyundai i30 rebadged and slightly retuned for North American consumption.

While adults no longer have room to stretch, the Elantra GT's rear seat remains roomier than those in the Mazda3 and Ford Focus, but can't quite match the Kia Forte5's interior dimensions. Actually, Mazda claims more rear legroom in its car, but this particular spec seems well out of sync with reality. Even if this wasn't the case, specs aren't everything. Owing to a healthy height off the floor, the Hyundai's rear seat might be the most comfortable in the segment (unless you're tall enough to require more than the modest amount of headroom).

A bonus for rear-seat passengers: the Tech Package includes the segment's only panoramic sunroof. 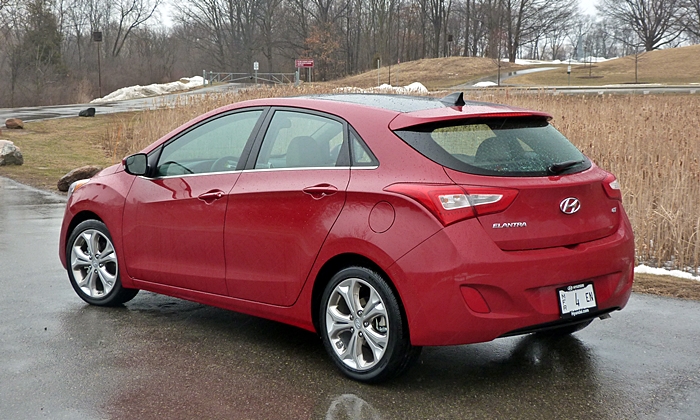 Complex surfacing helps disguise the height of the body sides towards the rear. 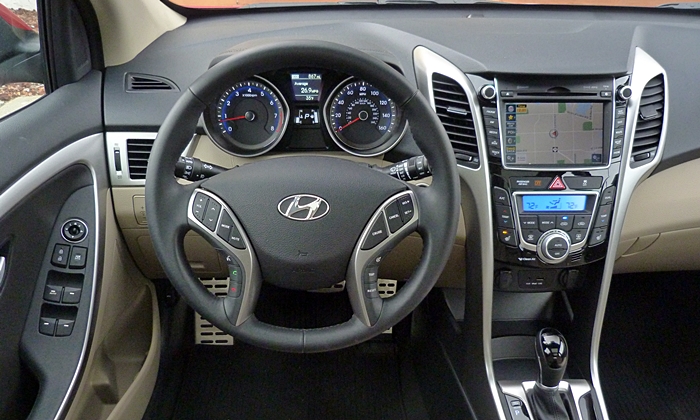 Well-designed controls, except those on the center stack are a little too much of a reach.

Compared to the Elantra Touring, the Elantra GT's combined legroom shrinks by over three inches and its cargo volume drops from 65 to 51 cubic feet, and no longer rivals that of compact crossovers. But it can still hold a few cubes more than the Mazda and the Ford. Not only this, but the Elantra GT's cargo floor is low and level.

Alas, this low, level floor comes at the cost of convenience. Before you can fold the rear seat back, the headrests must be removed and the cushion must be tipped forward.

Fuel economy was a reason to buy the last time around. Now it's a reason not to. Clearly the new, larger engine wasn't an improvement in every way. The Elantra GT's EPA ratings have fallen from 27 mpg city, 37 mpg highway to 24/33. Despite its significantly larger, more powerful engine, the Mazda3 manages 27/37 (and 28/38 with its optional capacitor-based regenerative braking system, on the tested car). The Ford Focus ties the Mazda.

If the trip computers in the Hyundai and the Mazda were similarly accurate, the fuel economy difference is even larger in real-world driving. Despite temps well below freezing, the Mazda averaged 40 when driven in the suburbs with an ultra-light foot, and high-20s to mid-30s when pushed. Despite temperatures just above freezing the Hyundai struggled to average over 30, more often averaging about 27. While the Elantra GT's EPA and real-world numbers might have seemed okay even a few years ago, the industry has been making dramatic gains in this area (last year's Mazda3 s trailed the pack at 22/29). Lose a few mpg and your car becomes uncompetitive.

The Elantra GT's swoopy styling has an all-too-common downside. Compared to those in the Elantra Touring, the new car's instrument panel is much deeper (visually distancing the driver from the road) and its windows are smaller. The Focus's instrument panel is nearly as deep, but that in the redesigned Mazda is unusually compact. In the Hyundai's defense, it's windshield is very tall, and in conjunction with the optional panoramic sunroof contributes to an open, airy feel to the interior--for the people in the front seats. The rear windows are small in all three cars. Small children won't be able to see much below tree tops in the Elantra GT without the aid of tall booster seats. 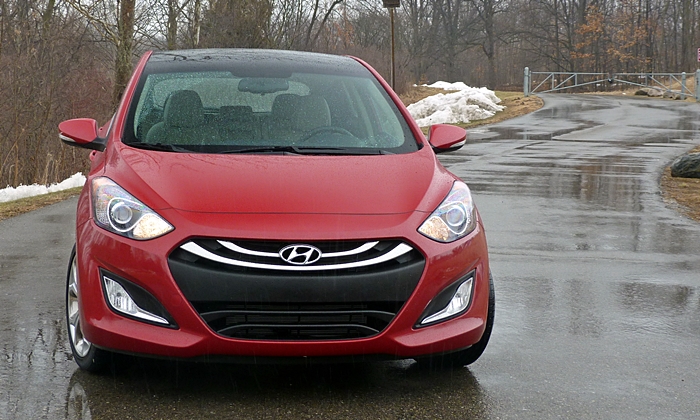 Hyundai's hexagonal grille. With panoramic sunroof, windshield appears to continue up into the roof. 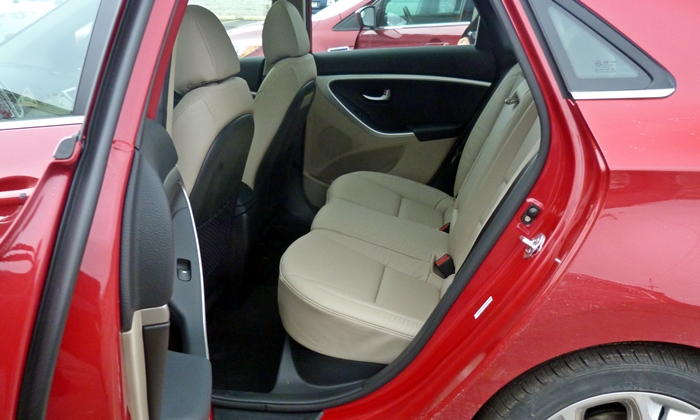 About the most comfortable back seat in the segment (unless you're tall).

Here we have a second category that has moved from a reason to buy last year to a reason not to buy this year. It wasn't long ago that low prices were a key Hyundai selling point. But, perhaps encouraged by the sales successes of the Elantra and Sonata, Hyundai has been inceasing its prices much faster than the industry average. Compared to the 2013 Elantra GT, the Elantra GT lists for nearly $1,000 more. The new engine is stronger, but it's not so strong to justify a price increase of this magnitude.

Especially not when Mazda has dramatically increased the performance and features of its car.

Sure, a loaded Elantra GT with Tech and Style Packages (as tested) still lists for $805 less than a Mazda3 s Grand Touring, $26,485 vs. $27,290. But the Mazda also includes about $600 in additional features. Its steering-linked xenon headlights, a head-up display, and a blind spot monitor more than compensate for its lack of a panoramic sunroof. Adjust for these feature differences, and last year's roughly two-grand difference has shrunk by over 90 percent. Given the Mazda's many advantages, a couple hundred dollar feature-adjusted price advantage isn't going to help sell the Hyundai.

So, what is cheaper? A Kia Forte5, that's what. With the same 173-horsepower, 2.0-liter engine as the Elantra GT, a Forte5 EX lists for $1,270 less despite including about $750 in additional features. Do the math, and we've got the $2,000 advantage the Hyundai enjoyed over the Mazda last year. Or you can step up to the Forte5 SX, with a 201-horsepower turbocharged 1.6-liter engine and sportier tuning, and still see a sticker that's only $330 higher on a car that includes over $900 in additional content. In short, the Kia has replaced the Hyundai as the value play in this segment.

The Elantra GT is much more stylish than the dowdy (save the SE's five-spoke alloys) Elantra Touring it replaced. The body sides are packed full of dramatic surfaces. But I haven't come across anyone who finds it beautiful. (If you do, feel free to post a comment.) The cleaner, more organic, Alfa-esque exterior of the Mazda3 seems to have more fans, though its front overhang could use a trim.

The Elantra GT vies with the Mazda3 and Ford Focus for the best-appointed interior in the segment. The Hyundai's doors sound and feel solid when pulled close (more so than the Mazda's). With tan leather, the ambiance is warmer than you'll find in the others.

The 2014 Elantra GT's 173-horsepower 2.0-liter engine is certainly quicker than last year's 148-horsepower 1.8-liter. It's no longer sluggish. But "quick" remains a stretch. The Mazda's 184-horsepower 2.5-liter engine, though it doesn't produce much more peak power (according to the official specs), feels considerably gutsier, partly because it produces an encouraging growl when revved. The Hyundai's much buzzier engine might not be very efficient, but it sounds like an engine designed for economy, not performance.

The tested car had a six-speed automatic, and turning off "active eco" did improve responsiveness a bit. Opting for the six-speed manual transmission (currently offered only with a 155-horsepower 2.0-liter engine in the Mazda) should render the powertrain more engaging (even if Hyundai's shifters aren't nearly as slick as Mazda's).

Partly thanks to Sachs-supplied dampers, the Elantra GT rides and handles considerably better than the Elantra sedan. But it still lags the sharper, more agile Mazda and Ford in these areas. It's more solid and confidence-inspiring than fun.

The Hyundai's steering has three selectable levels of assist. But even the "sport" level only feels sporty compared to the other two, with the additional tightness on center fading away once the wheel is turned. Though some road surface information makes its way through in "sport," you'll still receive much more nuanced feedback through the Mazda's wheel.

Here we have a clear dynamic victory for the Elantra GT over the Mazda3: the Hyundai rides much more smoothly, and somewhat more quietly as well. Those more interested in ride quality than handling will prefer what might be Hyundai's best chassis tuning to date. Ride quality still isn't among the "why to buys" because the suspension of the Focus, though decidedly firmer over some surfaces, better controls body motions and feels like that of a more expensive car. The Ford is also a little quieter.

Even with the 2014's stronger engine, the Elantra GT doesn't earn its suffix. The Hyundai doesn't accelerate or turn with the verve of the Mazda3. Yet none of the "why nots" are certain deal-killers. The Elantra GT isn't awful in these areas, just short of the best, and so not quite worthy of a roughly equivalent price. But, compared to the Mazda, it does have a warmer interior, a smoother, quieter ride, and a more comfortable rear seat. It could be the winner of this comparison for those not seeking...a GT. 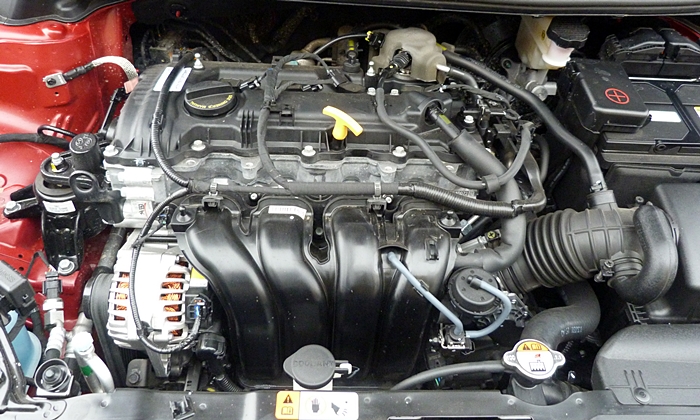 Elantra GT engine no longer weak, but not quite strong, either. Could sound better. MPG marginal. 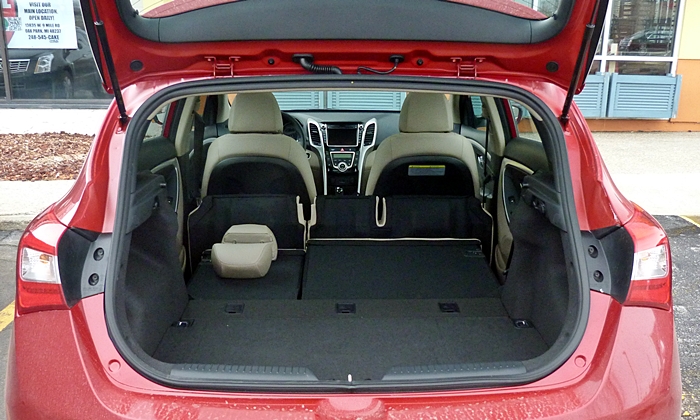 Low, flat floor, but a bit of a PITA to fold the seat.

Hyundai and Mazda each provided a insured car for a week with a tank of gas.

More About the Elantra GT 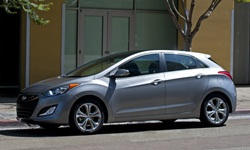 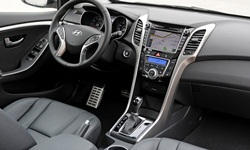